You were redirected to https://www.coe.int/en/web/electoral-assistance/-/awareness-raising-campaign-for-first-time-voters . 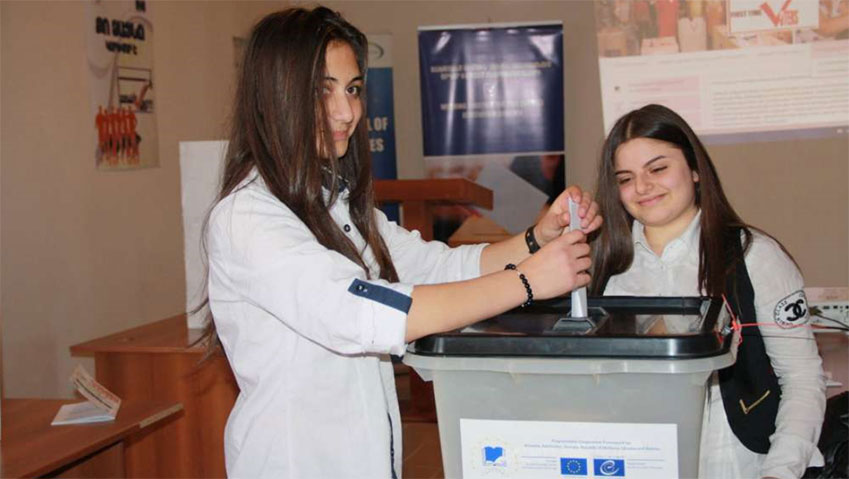 The series of election simulation games, so called mock elections, was launched within a First-time voters awareness raising project on 18 November 2016 in Yerevan high school 198.  The awareness raising project, which is part of the Long-term Electoral Assistance Program from Council of Europe in Armenia, is implemented by the Yerevan School of Political Studies and reaches out to the 110 high schools of the country. The initiative started in school 198 with staging of an electoral process: schoolchildren who had been preliminarily tutored by trained teachers had to organise the entire electoral process by themselves, setting up a polling station and a voting process in tune with the new Electoral Code of Armenia. One of the students appointed as the Chair of the electoral commission was stated enthusiastically : “The practical staging of elections was both exciting and informative for me, as it enabled me to familiarise myself with my future rights and the importance of voting”.

Head of the EU Delegation to Armenia, Ambassador Piotr Switalski and Ms. Natalia Voutova, Head of Council of Europe Office in Yerevan assisted to the launching event. Ms Voutova explained: “We have been actively involved in legislative field with RA authorities for upcoming elections. Now it is very important to see how the processes will take place during the election preparation stage and throughout elections. In this context it is also very important that young voters, particularly first-time voters, know their civic rights and responsibilities and learn about the electoral process.” Also media took broad interest in the initiative with several TV stations covering the event.

Since the launching event in November 2016, further mock elections have been organised in 50 high schools of Armenia and the initiative will be continued in the remaining 59 high schools during 2017.  Pupils from 10th, 11th and 12th grades will learn in three lessons about democratic values and governance systems, about election and voting process as well as about their rights and obligations as voters.

Parallel to the activities at the high schools an interactive education platform was installed, providing young people, teachers and election stakeholders a space for interaction, and to bridge the gap between theory and practice, with exercises and practical tests which help young people to make use of the knowledge acquired and to avoid mistakes in polling stations during the upcoming elections.