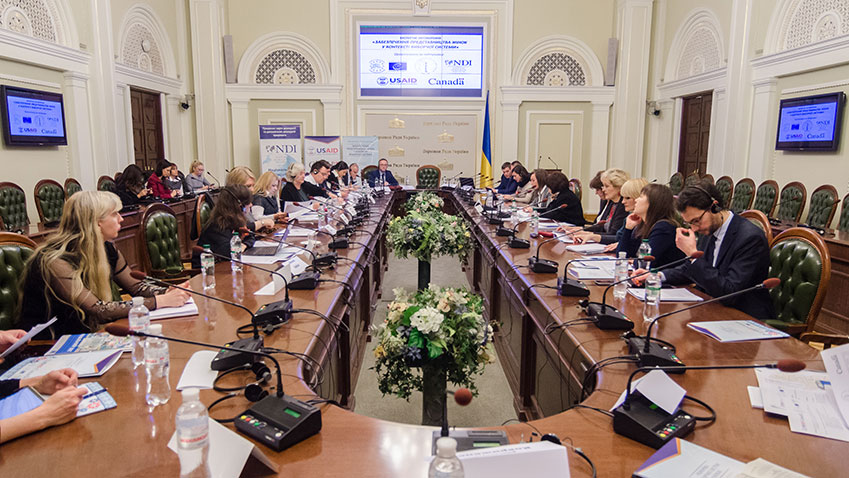 Gender quotas in electoral legislation were applied for the first time in Ukraine during 2015 local elections providing the requirement of at least 30 per cent representation of each gender on a party list.

Despites of these positive developments, women comprised about 35 per cent of all registered candidates for the positions of deputies and 13 per cent of candidates for the positions of mayors. In Ukraine, female candidates continue to face a number of barriers to an effective access to political life such as limited access to media landscape, limited access to party leadership at both central and local branches, fragmentation of the legal framework and absence of effective mechanisms for the implementation of quotas.

Addressing these issues and identifying ways to ensure sustainability of the electoral legislation through the adoption of a comprehensive electoral code will be discussed on 3 February 2016 at a “Gender Workshop” organised by the International Foundation for Electoral Systems (IFES) with the full support of the Council of Europe and in co-operation with the Verkhovna Rada of Ukraine. This activity is part of a global reflection on the reform of the electoral system of Ukraine conducted within the framework of the “Electoral System Week” which will take place in Kyiv from 2 to 4 February.

Parliamentarians, representatives of civil society organisations, international organisations and academics will have the opportunity to exchange views with Mr Sergiy Kyslytsya, Chair of the Council of Europe Gender Equality Commission and Ms. Elena Centemero, Chairperson of the Committee on Equality and Non-Discrimination of the Parliamentary Assembly of the Council of Europe, on ways to improve women political representation through the system of quotas.

Furthermore, in 2016 the Council of Europe Gender Equality Commission will assess the compliance by its Member States, including Ukraine, with the Committee of Ministers Recommendation (2003)3 on balanced participation of women and men in political and public decision.