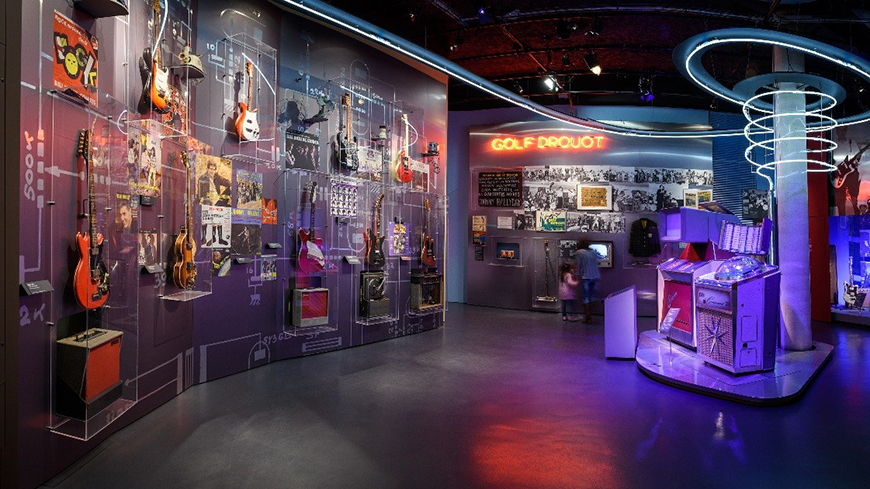 The Museum of Popular Music (Musée des Musiques Populaires) is an audacious attempt to walk visitors through the evolution of music from the 18th century to the modern day. The museum is located in the heart of Montluçon, a mediaeval city of 39,000 inhabitants in the very centre of France. This resolutely modern museum houses an impressive collection of musical instruments to accompany visitors on their journey through more than two centuries of music, from traditional to modern-day pop music.

Set in a boldly modern building designed by Philippe Tixier, an architect from Clermont-Ferrand, the Museum of Popular Music (Musée des musiques populaires in Montluçon), inaugurated on 21 June 2013, conserves and exhibits exceptional collections most of which were acquired by the city of Montluçon through gifts or purchases subsidised by the le Regional Museum Acquisition Fund or on loan from the Musée de la Musique in Paris and the MuCEM in Marseilles.

These collections, which constitute a national reference fund, are composed of three inseparable, coherent and representative parts: musical instruments, musical objects and the documentary section. The musical instrument collection boasts over 3,500 remarkable instruments dating from the late 18th century to the modern day, a varied collection including 80 hurdy gurdies, 200 bagpipes, 210 electric guitars, 140 amplifiers, 30 sets of drums, 80 brass instruments, 36 accordions, amongst others. The collection has been steadily growing for 50 years. The hurdy gurdies, bagpipes and electric guitars are all fine pieces with an intrinsic quality of their own.

The exhibits also include means used to record and broadcast popular music in the 20th century (tape recorders, phonographs, gramophones, wirelesses, televisions and computers). The whole is enhanced by a major collection of mainly audio documents (records, tapes, interviews, etc.) and a specialist library.

In 3,300 m² of floor space the museum presents its material and immaterial heritage collections, with musical repertoires, the instruments that accompany them and also the close ties between music and society (learning and passing on musical skills, how it relates to the body, to dancing, digital music, etc.). With its official Museum of France seal of approval, the Mupop attracts increasing numbers of visitors, offering them an instrumental circuit and a musical tour punctuated by different audio effects. With mobile audio guides visitors can discover six spaces: rural music, music from the industrial revolution, old-time dance music, swing and jazz, rock ‘n’ roll and electric music, then pop music and finally various rock and electro styles. The “summer hit songs” exhibition starting in spring 2019 will look back at this concept popular since the 1960s, spotlighting the most popular songs people danced to each summer.

The Mupop, a museum unique in Europe devoted to popular music, is an ambitious initiative for Montluçon: “in this working class part of town people worked hard and played hard”, the museum Director explains, “and music and dancing were a vital part of it”. This museum was created in a small town with a gradually declining population of 39,000 (– 0.8% from 2010 to 2015), high unemployment (20.4%) and a 22.3% poverty rate. Considering that the town and region is not particularly attractive, the museum draws in a respectable number of visitors; it still needs to improve its communication efforts, however, to pull in even larger crowds.