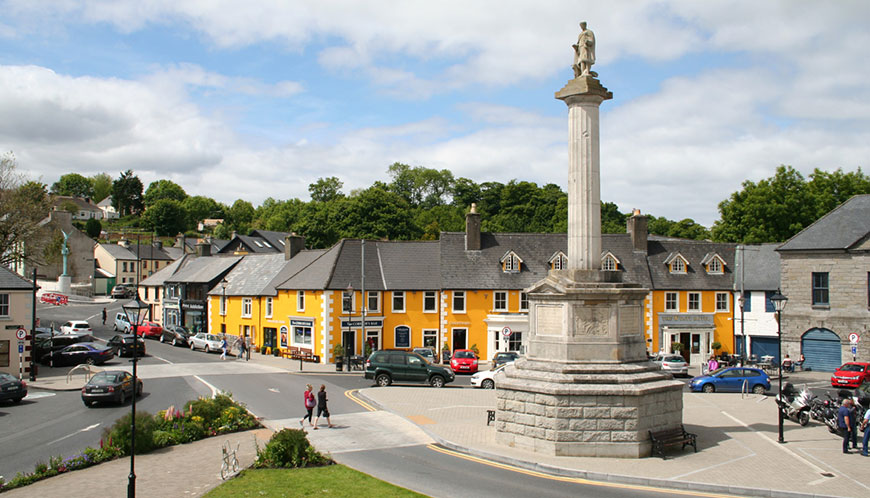 The Historic Towns Initiative (HTI) is a joint undertaking by the Department of Arts, Heritage and the Gaeltacht (DAHG), the Heritage Council and Fáilte Ireland based on a renewal of the former 'Heritage Towns' designation. The purpose of the initiative is to promote the heritage-led regeneration of Ireland’s historic towns, many of which have seen a reversal of fortune over the past number of years. A 'Historic Towns Initiative Framework' which sets out the steps to follow when undertaking a heritage-led regeneration project of a town was launched by the Minister in February 2013. A pilot phase of the HTI was undertaken in 2013-14 in three towns, Listowel, Westport and Youghal and was run in partnership with Fáilte Ireland and the Heritage Council and the three relevant local authorities.A capital investment from DAHG of €0.240m (and financial support by Fáilte Ireland) in 2013 with a further €0.101m of DAHG funds in 2014 together with investment from the local authorities, chambers of commerce and private individuals, funded the pilot HTI projects. Projects funded included public realm enhancement, façade improvement works, the rejuvenation and branding of a heritage quarter, conservation works to protected structures and structures within Architectural Conservation Areas, shopfront conservation schemes, signage for a heritage trail; and a unique project which involved the planting of a linear orchard along the Westport Town Greenway by the local community. A sum was set aside by each pilot town from Fáilte Ireland’s contribution to fund a baseline survey of the town. The survey was undertaken by Behaviour & Attitudes and assessed the opinions of residents, visitors and local businesses. Active consideration is now being given to the roll-out of the HTI on a national level, subject to adequate financial support secured from exchequer funds.

In economic terms, the DAHG funding of €240k in 2013 leveraged €351k in return giving a multiplier effect of 1.5 with projections that €120k in funding for 2014 will leverage €24k. This leveraging was a combination of private and local authority funding. This multiplier effect is deemed very satisfactory for a pilot project. Based on similar schemes operating internationally it would be anticipated that a national HTI scheme could leverage significant investment. Historic Scotland’s investment in the Conservation Areas Regeneration Scheme of £6.7 million attracted a further £18.6 million of investment from other sources, delivering a leverage factor of almost 3:11:3. Due to the capital value of the programme a full Value for Money exercise was not deemed warranted. However a short cost- benefit analysis was considered that did analyse the outcomes and risks and ultimately showed that the scheme met its objectives and was a good use of resources.

Consideration also needs to be given to the number of jobs supported under this pilot in the three towns in construction, conservation, other ancillary services and ultimately jobs sustained by increased trade in local businesses and visitors to towns. The ECORYS Report on Economic Value of Ireland’s Historic Environment, undertaken by the Heritage Council in 2012, establishes that heritage conservation and tourism have very significant economic value and that Ireland’s historic environment supports over 25,000 FTE jobs and contributes in the order of €1.5 billion to the nation’s GVA. A survey by the Association of Architectural Conservation Officers (March 2011) also estimated that for every €1 given by the State to assist conservation work resulted in €4.38 is spent in the construction sector. In Westport the projects undertaken assisted in the training of traditional skills and the creation of that skills base for future works. The 2010 Department of Finance Infrastructure Investment Priorities report noted that each €1m investment in construction projects sustained between 8 and 12 jobs. Listowel estimated that 12 jobs with an investment of just €120k were directly supported by the pilot phase of the HTI in 2013 with many more downstream opportunities created.

Each pilot town tailored the framework to suit the situations of the individual town. Youghal already had a regeneration plan in place since 2005 and took the HTI as an opportunity to implement further actions from that plan. Westport began the process midway through the first year of the pilot to undertake public consultations regarding the development of a heritage/conservation plan for the town. However, Westport has had a general town plan in place since 2000. Listowel in 2014 dedicated resources to initiate development of the heritage-led regeneration plan and relied on its public realm plan heavily in 2013. On review, having a current regeneration plan in place first before projects began may have been preferable as it would have given each town and its residents and businesses a clear vision for the town with firm objectives. Ideally, the regeneration action plan should be complimentary to the local development, heritage and public realm plans of each town. This became evident when projects did not proceed as planned and this lack of clear focus caused difficulties when funding had to be reallocated to other projects.