Promotion of good governance: fight against corruption, money-laundering and the financing of terrorism (SNAC 2 - Jordan)

On  4  February  2015  the  Council  of  Europe’s  Committee  of  Ministers  adopted  the Neighbourhood cooperation objectives with Jordan for 2015-2017, which were developed based on close consultations between the Jordanian authorities and the Council of Europe. These objectives establish the overarching framework of bilateral cooperation between the Council of Europe and Jordan and include the following:

In order to implement the abovementioned objectives the Council of Europe has commenced the implementation of the Programme “Towards Strengthened Democratic Governance in the Southern Mediterranean (South Programme II)”, building on the outcomes and achievements of the 1st phase of the South Programme implemented in 2012-2014. The geographical scope of  the  Programme  covers  cooperation  with  countries  of  the  Middle  East  and  North  Africa (MENA)  region,  but  in  particular  Tunisia,  Morocco  and  Jordan,  who  will  act  as  the  main beneficiaries.

The Programme serves as the overarching framework for Council of Europe cooperation with Jordan in the following three priority areas: i) human rights; ii) rule of law and iii) democracy. The “rule of law”  area  includes  a  significant  component  on  “Fight  against  corruption  and  money-laundering”, which will be implemented as one of the Programme’s components in the form of a separate Project. 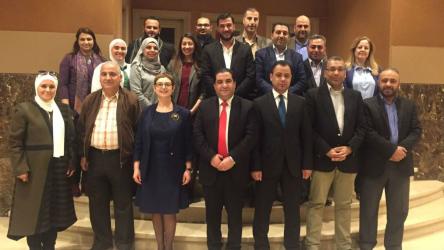 The South Neighborhood Anti-Corruption Project (SNAC 2) held back-to-back trainings on terrorism financing risks in the non-profit sector in Jordan. The trainings were addressed and tailored to a number of different target audiences: law enforcement authorities and the financial intelligence... A training on financial investigations of international corruption cases for representatives of the Jordanian Integrity and Anti-Corruption Commission (JIACC), Anti-money laundering Unit, Public Security Directorate and Judicial Council is held by the Council of Europe. The training enables...