As citizens, we all have an obligation to intervene and become involved - it's the citizen who changes things.

• To reflect on the ways young people can participate and the   factors which impede or facilitate their participation
• To develop skills to co-operate, organise and take action together  with others
• To cultivate a sense of responsibility for one's own actions

• Handout: "The Ladder of Participation" (see also the background  information on Citizenship and Participation)
• Large sheet of paper, marker pen and scissors
• "Post-its" or small pieces of paper to be taped on a wall
• A wall

Part 2. How we participate
5. Ask participants to work individually for 5 minutes, trying to find examples in their own lives for as many of the 8 levels as they can. Tell them to think about what they do in all aspects of their lives: at home, school, clubs, work and with family and friends.
6. Then invite participants to share their examples in small groups of 4-5 people. While discussing the examples, ask participants to come up with ideas for obstacles (things that stop them from moving up the ladder) and enabling factors (things that help them to move up the ladder). They should write each idea on a separate "post-it".
7. While the groups are discussing, stick the prepared headings "obstacles" and "enabling factors" on the wall about 2 metres apart. Then bring the groups into plenary and ask them to stick their papers on the wall under the headings.
8. Review the two lists with the participants. Ask for clarification about any ambiguous statements and try to resolve any disagreements between participants about the positioning of the statements.
9. Now put the "control" and "no control" headings up on the wall under the first headings and ask participants to sort each list into two sub-lists according to whether the statements are about things that they have (or could have) control over, or whether the statements refer to external factors that are out of their control.
10. Finally review the positions of the papers in the four lists. Then go on to the evaluation and debriefing.

In part 2, encourage participants to come up with as many different ways of participating as possible. For ideas,  see the section on Citizenship and Participation.

When you introduce the ladder of participation, make it clear that the model is not meant to suggest that being at the "highest" level is always the best thing. In different situations and depending on people's expertise, time availability or level of interest it may be most appropriate to participate for example, as a consultant or as a representative. There is nothing inherently "wrong" with being merely consulted (or even being merely informed) in certain situations. However, the bottom three rungs of manipulation, decoration and tokenism are not acceptable and cannot be considered as "participation" because involvement and contribution are minimal or non-existent. You should stress this point and be sure that no-one is in any doubt about it.

When the group tries to think about enabling factors and obstacles, help them to put as many statements as possible under the "control" category. You may want to give a few examples or remind them that the "obstacles" may be psychological as well as physical or structural. In the discussions, encourage participants to find ways around things that appear to be obstacles, for example, if they suggest that "an authority (teachers or board of governors in a club or college) won't let us", find out if they have tried asking!
If they say, "We don't think we can do it", ask how they could prove that they could do it!
If they say "It would only make my parents / the teachers / the local authority angry", see if they can find other ways of putting the question so that the person or people referred to would react differently.

You may want to use this activity as an opportunity to speak about the group members' participation in the lessons or club activities in general. You could explore ways in which you or they may be able to facilitate greater involvement and the taking of initiatives on their part.

Discussing whether some members of the group present obstacles for others, preventing them from participating at a deeper level, can be a way in to tackling issues about peer pressure and bullying.

You could use the role plays at the beginning to explore obstacles and enabling factors, rather than having young people think about cases in their own lives. After each performance, use the Forum Theatre technique  and ask participants to take the action forward in a different way. This will allow them to explore ways of facing obstacles in situations similar to their own lives which may prevent them from participating more actively.

Draw up an action plan together with the group to give people responsibility and control over what they are doing and learning.

The activity "Beware we are watching" promotes personal action and responsibility and shows ways of participating in a campaign.

Get the group to draw up a list of things in their local community that they would like to change. Then ask them to identify one or two items on this list where they believe they may be able to have an impact, and to explore how their voice could be heard or how they could influence change in some other way. Then encourage them to pursue these ideas in action!

The Council of Europe has a manual on the revised European Charter on the Participation of Young People in Local and Regional Life called "Have your say". This is an excellent resource on youth participation and has a separate section of activities.

In Europe there is a consolidated tradition of youth participation and representation. For  instance, the Council of Europe's commitment to fostering greater youth participation can be demonstrated through its system of co-management in the youth sector. The Advisory Council on Youth brings together 30 representatives from international youth non-governmental organisations and national youth councils who, together with governmental youth officials in the European Steering Committee on Youth, decide on the priorities and programmes and make recommendations for future policies and programmes. The Advisory Council also formulates opinions and proposals on any question concerning youth within the Council of Europe.

The European Youth Forum is an independent, democratic, youth-led platform, representing about 100 National Youth Councils and International Youth Organisations. The YFJ works to empower young people to participate actively in society to improve their own lives, by representing and advocating their needs and interests and those of their organisations towards the European Institutions, the Council of Europe and the United Nations. The YFJ believes that a "culture of participation" needs to be created. This means that the youth policy agenda has to develop hand in hand with the increased participation of young people in decision-making processes on the matters that concern and affect them. 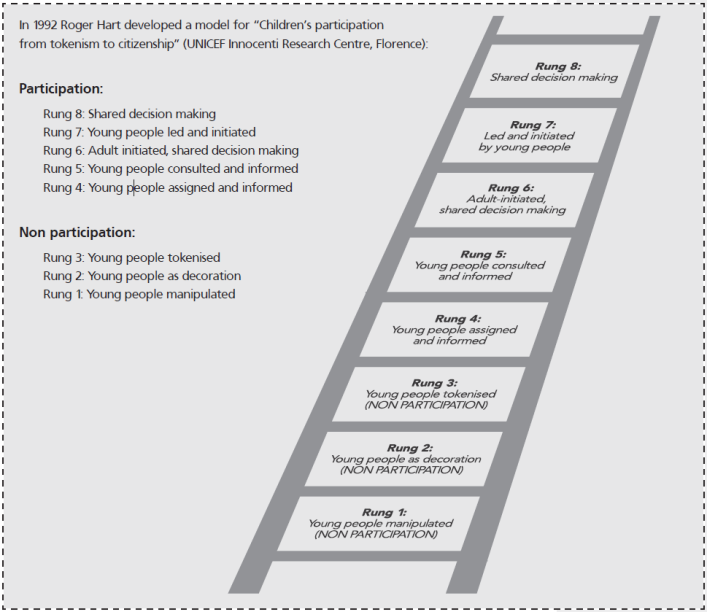