Democracy is not something you believe in or a place to hang your hat, but it's something you do. You participate. If you stop doing it, democracy crumbles.

This activity involves negotiation about the rights and responsibilities of citizens, the government, NGOs and the media in a democracy.

1. Explain that the purpose of the activity is to draw a "map" of the relationships between four "actors" within (an ideal) democratic society.
2. Divide the participants into four equal-sized groups to represent four "actors" in a democracy: the government, the NGO sector, the media and citizens.
3. Give each group a sheet of A4 paper and a pencil to use for making notes and ask them to spend ten minutes brainstorming the role that their "actor" plays in a democratic society, that is, what the main functions that it performs are. At the end of the time, they should agree on the five most important functions.
4. Next they are going to prepare their "record sheets". Hand each group a large sheet of paper (A3 or flip chart paper) and a red marker pen, and ask them to write down the "actor" they represent at the top and underneath, their five most important functions.
5. Bring the groups together to present their "record sheets". Let the groups share their reactions. Ask them if they agree about the main functions of these four "actors". If they wish to, the groups may amend their lists in the light of the feedback.
6. Now separate the four groups again and hand out the green pens. Give them fifteen minutes to brainstorm what they require from each other, in order to carry out their own functions. When the time is almost up, ask the groups to prioritise the two most important demands they make of each of the other "actors" and to list these under separate headings using the green marker pen.
7. Hand out the copies of the "Rules of play", go through them and make sure everyone understands what they have to do. Then ask the groups to bring their "record sheets" into the middle of the room and to lay them in a square about 1m apart (see diagram). Ask members of each group to position themselves near their "corner".
8. Hand each group their 6 strands of wool, a roll of tape and a blue pen.
9. The rounds of negotiation now begin. You should allow 10 minutes for each round. Remind people that the aim is to map out relationships between the different "actors" and that when a demand is accepted one piece of wool should be taped between the two papers to signify acceptance of responsibility.
10. Move on to the debriefing and evaluation while participants are still sitting around the map.

Ask the participants to look at the map they have created and to reflect on the activity:
• Was it hard to think of the functions that the government, NGOs, media and citizens perform in a democracy?
• Were there any disagreements within the groups about which claims should be accepted or rejected?
• Which of the claims made on other groups did they not accept as responsibilities? Why was this? Do you think that such cases would cause any problems in reality?
• Were there responsibilities that each group accepted but which they had not recognised before? How do they feel about this now?
• Did the activity show people anything new about democratic society that they did not know before? Were there any surprises?
• Which rights are at stake in this activity?
• Article 29 of the UDHR states: ‘Everyone has duties to the community in which alone the free and full development of his personality is possible'. Which are the most important duties you have at present in your life?
• What are the roles of the different actors in ensuring that nobody's rights are violated?
• What are the different actors' roles in ensuring that everyone has access to human rights education?

Using four different colours of yarn (one colour associated with each "actor") makes the map look more attractive and it is easier to trace the links, for example, all the citizens' demands might be yellow and all those of the media, black.
In step 5 of the instructions, after the groups have drawn up their list of functions, don't spend too long discussing the issues as a whole group. You should use this more as a prompt for the next small group work they will be doing. Groups may want to make a note of the other groups' functions.

If groups struggle to come up with functions, try asking them to think about the kind of thing their "actor" does, and what would be missing if it did not exist! You may want to provide some examples to help groups to get started:
• Governments draft legislation, decide on general policy, and ensure that the country meets its budget.
• NGOs lobby for minority interests, take up issues which the government (or opposition) fails to address, and campaign for changes in legislation.
• The media reports on government policy, investigates issues, and provides analysis and commentary.
• The "functions" of citizens include everything that is important in a democratic society: ideas may range from standing for parliament, engaging in human rights activism, setting up organisations to protect particular groups, questioning and becoming involved in political life, and so on.

When they draw up their lists of demands (step 5), tell them not to be unrealistic in their demands of the other "actors"! These responsibilities will need to be acceptable, so they should not make unfair or unreasonable claims.

At step 9, the negotiations should not be presented as a "competition", nor should they occupy too much time. Emphasise to the groups that they should see themselves as co-operating with each other: the purpose is to establish a society in which all "actors" work together for everyone's satisfaction. Therefore, the transactions should be relatively quick: tell groups to accept claims if they seem to be reasonable, and otherwise to reject them, with any controversial ones to be discussed at a later stage.
If the groups need help with thinking about demands and responsibilities, then you could use as an example the media and citizens: journalists need tip offs about where events are happening and citizens have a responsibility to alert the media and provide witness statements.

The activity may be made more or less complicated by using different numbers of "actors" within society: for example, you may want to add "businesses", "minorities", or "disadvantaged groups". However, this will make the negotiation process a lot more complicated, and you may not want all of the groups to exchange demands with each of the others. You could also use different categories with more direct relevance to young people's reality – for example, replace "citizens" by "young people" and "the government" by "school".

The activity could be simplified by removing one or more of the groups: for example, by working with only "citizens" and "the government". This may be preferable if you have a small group.

You may want to try the activity without the use of the "record sheets": during the negotiation process, someone from the first group should hold one end of the piece of wool, and offer the other end to someone in the second group. If people keep hold of their ends, the whole "society" should be physically linked up by the end of the process!

The group could continue to add to the map, by including different groups within society (see under the heading "Variations"). They may want to transfer the map to another sheet of paper for greater clarity. Think about which connections in your own society are not well developed, and what could be done to overcome this.

If the group would like to think about the direction society is moving – and more especially – how they would like it to develop, then they may enjoy the activity "Our futures".

Do the activity again but this time use it as a method to analyse how your local government, the local media, local NGOs and citizens interact with each other. Identify where the links could be better and bring this to the attention of the "actors", either through writing letters, a blog or an article in the local media. You could make a practical start to improve the links between your own organisation, school, college or club with the other "actors".

1. The aim of the exercise is for each ”actor” to get their demands accepted by each of the other ”actors”.
2. The negotiations are made between pairs of ”actors” in three rounds as follows:
• Round 1: citizens and NGOs negotiate, and the media and the government negotiate.
• Round 2: citizens and the media negotiate, and NGOs and the government negotiate.
• Round 3: citizens and the government negotiate, and the media and NGOs negotiate.
3. In each round, the pairs themselves decide who is to start and they take it in turns to make demands of each other.
4. When making a demand, people should state the demand clearly and concisely. They should also explain what it involves and why they are making this particular demand, that is, why it is important to enable them to fulfil their own functions.
5. When deciding whether or not to accept a demand, people should decide whether what is being asked is fair, and whether they would be able to carry it out.
6. If the demand is accepted, then the pairs use one of the “demander’s” strands of yarn and tape it between the two “record sheets” to signify the agreement that has been made. The accepting group should make a brief note on their “record sheet” in a blue pen to remind them of their responsibilities and what they agreed to do.
7. If the second group rejects the demand, the piece of wool is put aside.
8. Repeat the negotiations, until all demands have been discussed.
9. In each round the process is repeated until there are connections between all four “actors”.
10. At the end of the process there will be a map to represent the relationships between the different actors in a democracy.
Each of the actors will have a “record sheet” with a list of their functions in red pen, a list of demands of the other “actors” in green and a list of actions they have agreed to take in order to meet the demands of the other “actors” written in blue. The demands and actions are represented by coloured yarn. 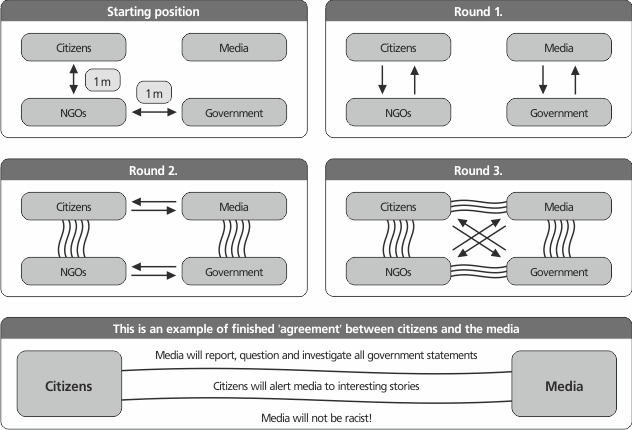