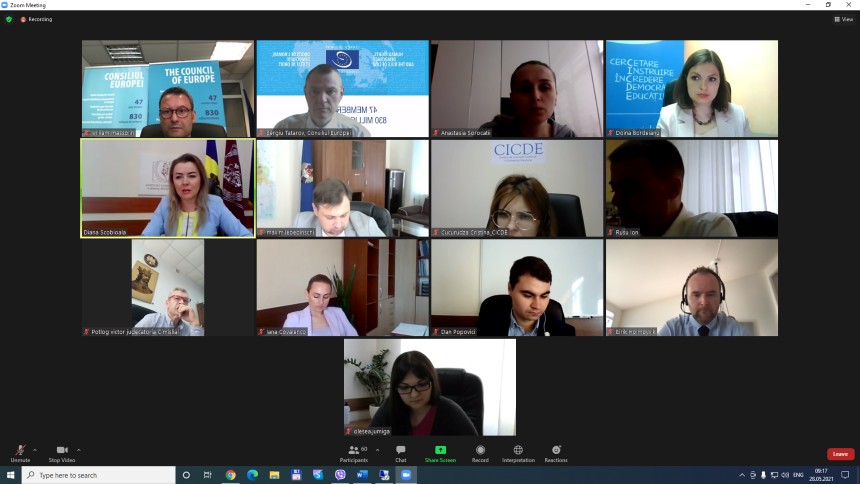 Mr. William Massolin, Head of the Council of Europe Office in Chisinau, opened the training by mentioning that „the organisation of such a training, in the on-going electoral campaign, became a good tradition and helps Moldovan judges and electoral staff dealing with electoral complaints, to do it in line with the best national and international standard in electoral field”. He added that „we managed to bring the best experts in electoral dispute resolution and misuse of administrative resources from the Venice Commission, and that such webinars build up a unified understanding and approach towards electoral dispute procedure and ensure better exercise by the Moldovan citizens and electoral competitors of their electoral rights.”

Mr. Maxim Lebedinschii, Secretary of the CEC, stated that the CEC is grateful to the Council of Europe and National Institute of Justice for this frutful and long-established co-operation in hovering skills and abilities of the electoral staff and administrative judges in examining and setteling of electoral complaints and disputes.

Mrs. Diana Scobioala, Director of the National Institute of Justice, highlighted the added value of the European expertise for Moldovan magistrates to strengthen their knowledge and practical abilities based on both national acts and the jurisprudence of the European Court of Human Rights in the electoral field, as well as on the documents and reports issued by the Venice Commission of the Council of Europe concerning terms, specificity, boundaries, celerity of the electoral disputes.

During the event, Director of the Training Centre, Dr. Doina Bordeianu mentioned that the use of administrative resources is a current topic, directly related to the integrity of electoral processes. The misuse of administrative resources adversely affects electoral contestants and voters. Thus, the former are drawn into an unequal electoral race, and the latter are deprived of the opportunity to objectively discern the qualifications of electoral contestants.

More than 70 magistrates and electoral staff from throughout the country took place in the training. They appreciated the webinar, built up a unified understanding and approach towards electoral dispute procedure, and insured better exercise by the Moldovan citizens and electoral competitors of their electoral rights.

The activity is implemented and funded by the Council of Europe within the Project "Improving electoral practices in the Republic of Moldova, Phase II"