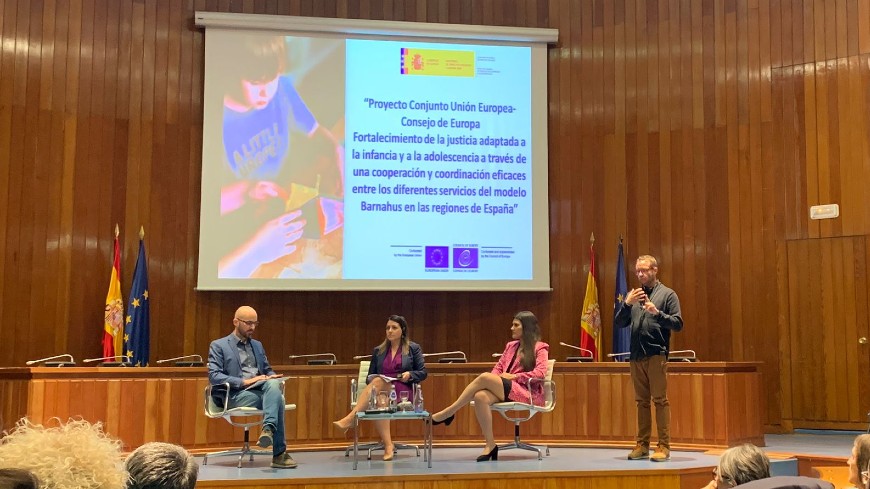 Ignacio Álvarez Peralta, Secretary of State of Social Rights of the Spanish Ministry of Social Rights and Agenda 2030, Adamantia Manta, Policy officer of the European Commission’s DG REFORM, and Mireya García de Murcia, Project Officer at the Council of Europe, during the kick-off meeting of the Barnahus project in Madrid, Spain.

On 26 October 2022, the kick-off meeting of the Council of Europe/European Union project “Strengthening child-friendly justice through effective co-operation and coordination among different Barnahus-type services in the regions of Spain" took place on the premises of the Spanish Ministry of Social Rights and Agenda 2030. Around 70 professionals including national and regional representatives, Advisory Group members, NGOs and academics attended the meeting in person and more than 60 people followed it online.

The Secretary of State of Social Rights inaugurated the meeting, followed by the welcoming remarks of representatives of DGREFORM and the Council of Europe Children’s Rights Division. The DG Childhood and Adolescence of the Spanish Ministry announced that the three pilot regions identified for the project implementation are Extremadura, Cantabria and Navarra. Notwithstanding, the national authorities declared the project as dynamic and open to provide support to other Autonomous Communities, which could be involved on a case-by-case basis in different activities. The meeting served to present the project outputs and the main findings of the inception report resulting from various consultations with key stakeholders and the Advisory Group, as well as to outline the Council of Europe’s project implementation dynamics.

As highlighted during the meeting, the project effectively contributes to the ongoing reform initiated by the Organic Law 8/2021 on the Comprehensive Protection of Children and Adolescences against Violence (LOPIVI). Therefore, the Council of Europe Children’s Rights Division will closely follow the presentation by the Ministry of Social Rights and Agenda 2030 of the new Spanish Strategy for the Eradication of Violence against Children on 16 November, as a public policy document that contributes to the implementation of the law and the project itself. In addition, as the next project activity, a full-day Conference on the Barnahus model will be organised in Madrid by February 2023.

Video recording of the meeting