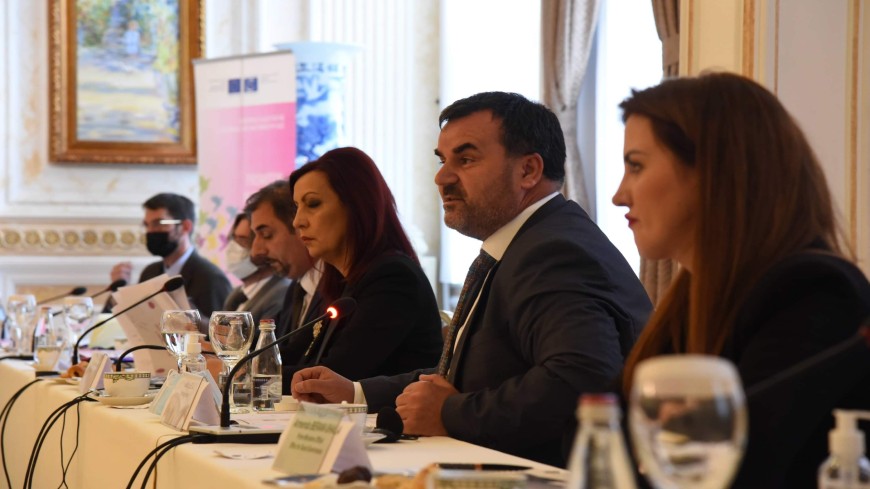 Organised by the Office of the Prime Minister and in support of the joint action of the European Union and the Council of Europe, “Promotion of diversity and equality in Kosovo”, a conference was held to present the findings of the research “Diversity and equality in Kosovo” and to launch a new Reporting Framework on Monitoring the Law on Protection from Discrimination.

The conference was chaired by Habit Hajredini, director of the Office for Good Governance in the Office of the Prime Minister, and opened by Frank Power, Head of the Council of Europe Office in Pristina. In the opening remarks both Hajredini and Power reaffirmed the good co-operation so far and the willingness to jointly continue towards improving the legislation and build mechanisms to ensure the protection and promotion of human rights in Kosovo.

The Deputy Prime Minister of the Government of Kosovo for Minority Issues and Human Rights, Emilja Rexhepi, stressed that the priority of the new Government is the protection of human rights, interethnic dialogue between all communities living in Kosovo, adding that the Kosovo society should believe in equality and coexistence regardless of ethnicity, religion, language or sexual orientation. “No one should be discriminated, because they are different,” concluded Deputy Prime Minister Rexhepi, adding that she will be committed to protecting the rights of vulnerable communities in Kosovo.

Other key speakers of the conference were Naim Qelaj, Ombudsperson of Kosovo, Luigi Brusa, European Union Office in Pristina, and Irena Guidikova, Head of Division, Inclusion and Anti-Discrimination Programmes, Council of Europe.

In addressing the audience, Irena Guidikova pointed out the readiness of Council Of Europe to continue the support to the authorities in fulfilling their mandate on protection from discrimination. The activities carried out are based in specific on the General Policy Recommendations of the European Commission against Racism and Intolerance (ECRI). These standards will continue to accompany the work of Kosovo on its European path.

“The effort made with the Office for Good Governance started yielding results, since the completion of the 2019 assessment of human rights mechanisms and starting off their reform, with strong support from the EU Office partners. The new reporting template is a tool that should help OGG staff, but also human rights focal points in the ministry and municipalities to better report on discrimination issues and move into evidence-based policing and strategies”, concluded Guidikova.

In presenting the methodology and main findings of the research, Angela Longo, Programme Manager at the No Hate Speech and Co-operation Unit of the Council of Europe stated: “The survey methodology has been adjusted to reflect the vulnerable groups the Council of Europe and our European Commission against Racism and Intolerance include in their monitoring, when reporting on the state of play of discrimination in the countries, thus the socially vulnerable groups under the mandate of OGG (and of the Ombudsperson, acting as Equality Body). The includes references to Roma, women; disabled persons; LGBTI; religion. For some of these groups, things do not seem to improve in Kosovo as we all wish. The survey tells us that discrimination remains a phenomenon perceived by citizens and people. In various forms, at local level. Gender based discrimination and based on ethnic grounds are very relevant here. It is also a call for institutions to further reinforce reactions to that, at public level but also by means of redress to individual cases”, said Longo.

The results of the survey reflect the achievements and challenges faced by institutions to ensure equality and human rights as well as protection against discrimination.

The survey also serves as a measure for the implementation of Law on Protection against Discrimination and will assist the institutions of Kosovo in developing policies and actions in accordance with the needs presented.

The survey, its analytical annex and the public presentation have been organised by the Office for Good Governnance/Prime Minister Office, and supported within the joint European Union/Council of Europe programme “Horizontal Facility for the Western Balkans and Turkey 2019-2022”, and its action on “Promotion of diversity and equality in Kosovo”.