Since Georgia's accession to the Council of Europe on 27 April 1999 as its 41st member state, the Organisation has been supporting Georgia in honouring its statutory obligations and specific commitments to strengthen democracy, human rights and the rule of law. 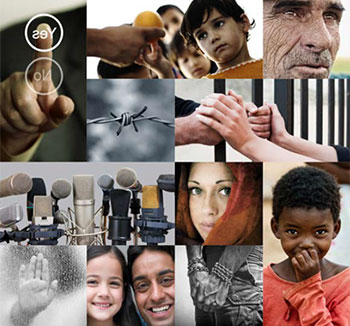 The Council of Europe advocates freedom of expression and of the media, freedom of assembly, equality, and the protection of minorities. It has launched campaigns on issues such as child protection, online hate speech, and the rights of the Roma, Europe's largest minority. The Council of Europe helps member states fight corruption and terrorism and undertake necessary judicial reforms. Its group of constitutional experts, known as the Venice Commission, offers legal advice to countries throughout the world.

The Council of Europe promotes human rights through international conventions, such as the Convention on Preventing and Combating Violence against Women and Domestic Violence and the Convention on Cybercrime. It monitors member states' progress in these areas and makes recommendations through independent expert monitoring bodies. All Council of Europe member states have abolished the death penalty.

Did you know?
The Convention on the protection of children against sexual exploitation and sexual abuse is the first instrument to establish the various forms of sexual abuse of children as criminal offences, including abuse committed in the home or family.

Abolition of the death penalty

The Council of Europe played a pioneering role in the struggle for the abolition of capital punishment, which it regards as having no place in democratic societies.  In April 1983 it adopted Protocol No. 6 to the European Convention on Human Rights abolishing the death penalty, followed in May 2002 by Protocol No. 13 on abolition in all circumstances.

The Council of Europe has made abolition of the death penalty a precondition for accession.  No executions have been carried out  in any of the Organisation's 47 member states since 1997.

Every country which joins the Council of Europe agrees to be subject to independent monitoring mechanisms which assess its compliance with human rights and democratic practices.

One example is the Council of Europe's Committee for the Prevention of Torture, which regularly makes unannounced visits to places of detention in the 47 member states (prisons, police stations, holding centres for foreign nationals) in order to evaluate the way in which people deprived of their liberty are treated.

For its part, the European Committee of Social Rights verifies that the rights to housing, health, education, employment and freedom of movement guaranteed by the European Social Charter are implemented by the countries concerned.

Another example is the Group of States against Corruption (Greco), which identifies deficiencies in national anti-corruption policies and encourages states to carry out the necessary legislative, institutional or administrative reforms.  Its evaluation is based on the relevant Council of Europe conventions.

Non-discrimination and the fight against racism

The European Convention on Human Rights prohibits all forms of discrimination by public authorities, on any grounds whatsoever. The Council of Europe carries out various activities to protect minorities, including the largest minority in Europe, the Roma.

The European Alliance of Cities and Regions for Roma Inclusion, for instance, is an initiative of the Congress of Local and Regional Authorities of the Council of Europe.  One tangible result of the Alliance is the Romact project run jointly with the European Union.

For its part, the European Commission against Racism and Intolerance analyses those specific problems and makes regular recommendations to the 47 member states of the Council of Europe.

The Council of Europe also plays a leading role in the fight against discrimination for reasons of sexual orientation or gender identity.

Finally, the Framework Convention for the Protection of National Minorities provides for a monitoring mechanism which evaluates and improves the protection of minorities in the countries concerned.

There can be no true democracy without freedom of expression and without free and pluralist media.  The case-law of the European Court of Human Rights affords the press extremely wide-ranging protection, especially where the confidential nature of journalists' sources is concerned.  According to the Court, the absence of such protection could deter sources from helping the press to keep people informed about matters of public interest.

The right to freedom of expression also applies to new forms of mass communication, including the Internet.  The Council of Europe is constantly active in defence of this right, taking account of any developments.

It is helping several of its member states to improve their legislation and policies on freedom of expression and freedom of the press. Training courses and study visits are also organised for media professionals.

In the sphere of justice and democracy, gender equality is now considered to be important to countries' economic growth. The aim of the relevant Council of Europe instruments is to combat all forms of discrimination against women and to promote women's role in society.

The Council of Europe Convention on preventing and combating violence against women, which constitutes a significant step forward in this field, is based on the premise that such violence cannot be eradicated unless efforts are made to achieve greater equality between women and men.

Children are vulnerable and depend on adults for most of their needs.  The aim of the Council of Europe's programme for children is to protect their rights, prevent every kind of violence against them, ensure that offenders are prosecuted and promote children's participation in those decisions which concern them.

Hence the Convention for the Protection of Children against Sexual Exploitation and Sexual Abuse is the first instrument criminalising sexual abuse of children, including at home or in the family.  The convention came into force on 1 July 2010.

In addition, the Council of Europe has adopted guidelines to improve children's access to justice.

Following the adoption in 2008 of its "White Paper on Intercultural Dialogue", the Council of Europe started several programmes on teacher training, the protection of minorities and social cohesion, including an annual dialogue with religious communities and representatives of non-religious beliefs.  A network of Intercultural Cities helps its member cities to manage cultural diversity and fosters mixing and interaction between heterogeneous groups in public places in order to promote cohesion.  It designs tools for resolving cultural conflicts.

In order to promote intercultural understanding, the Council of Europe prepares programmes and tools to improve language teaching.

Through their advisory and observation activities, the Parliamentary Assembly of the Council of Europe and some other European institutions, such as the OSCE, help to guarantee democratic, free and fair elections throughout the continent.

The Congress of Local and Regional Authorities periodically observes local and regional elections in the Council of Europe's 47 member states.  Its observation missions cover the whole electoral process and complement its activities in monitoring the European Charter of Local Self-Government.

Furthermore, in order to improve the proper conduct of elections, the Council of Europe draws up programmes of assistance for fundamental reform of electoral legislation, for the drawing up of electoral rolls and for the training of national observers and election officials.

Education in human rights and democracy

Democracy also extends to active public participation in community life, especially in the context of civil society activities.  The Council of Europe develops strategies and tools to promote the learning of human rights and democracy.  The Council of Europe Charter on Education for Democratic Citizenship and Human Rights Education shows us how to put those values into practice.

Over 5,000 youth leaders are trained each year at the Council of Europe's European Youth Centres in Budapest and Strasbourg.  The courses provided produce a cascade effect, with the youth leaders passing on what they have learned to the members of their associations.  Over 15,000 young people also benefit from projects supported by the European Youth Foundation with a view to promoting understanding, tolerance and solidarity.

Quality of medicines and health care

The Council of Europe has been able to set up a single European agency for medicines which harmonises quality standards for substances used in the manufacture of pharmaceutical products.  The European Pharmacopoeia brings together 37 member states and the European Union.  There are numerous observer states, and the WHO and the Taiwan Food and Drug Administration also hold observer status.

The work of the Council of Europe also encompasses specific health fields, such as blood transfusion and organ transplantation.

The European Directorate for the Quality of Medicines and Health Care (EDQM) bears responsibility for all those activities.

Thanks to the "Medicrime" Convention, which is open to non-European states, it is now possible to punish as criminal offences, on the grounds of damage to public health, the distribution and sale (including via the Internet) of counterfeit medical products.

How to distinguish us

Council of Europe
An international organisation in Strasbourg which comprises 46 countries of Europe. It was set up to promote democracy and protect human rights and the rule of law in Europe.

European Council
Institution of the European Union, consisting of the heads of state or government from the member states together with the President of the European Commission, for the purpose of planning Union policy.

European Union (EU)
The EU currently has 27 members that have delegated some of their sovereignty so that decisions on specific matters of joint interest can be made democratically at European level. No country has ever joined the EU without first belonging to the Council of Europe.

In the immediate aftermath of the Second World War, it was generally felt that a new –style organization was needed to ensure that totalitarianism would never get a second chance in Europe, and guarantee peace, democracy and human rights throughout the Continent.

From Zurich to The Hague

Even before the war ended, politicians, idealists, writers and former members of the French Resistance were envisaging a fresh political start for Post-war Europe.

Their aspirations were magnetically voiced by Winston Churchill, who had just left office, in his historic speech to Zurich students on 19 September 1946. Franco-German reconciliation and unification of the “European Family” were his primary demands. “We must create something like a Unite States of Europe”, he declared. His words struck a chord in the hearts of countless war-traumatized Europeans, and many of them helped to found the International Co-coordinating Committee of Movements for European Unity in 1947. This symbolic coming-together was the first step, and the next came when the various pro-European movements organized a huge congress in the Hague (Netherlands) from 7 to 10 May 1948, to promote unity and lay the foundations of the future Europe. 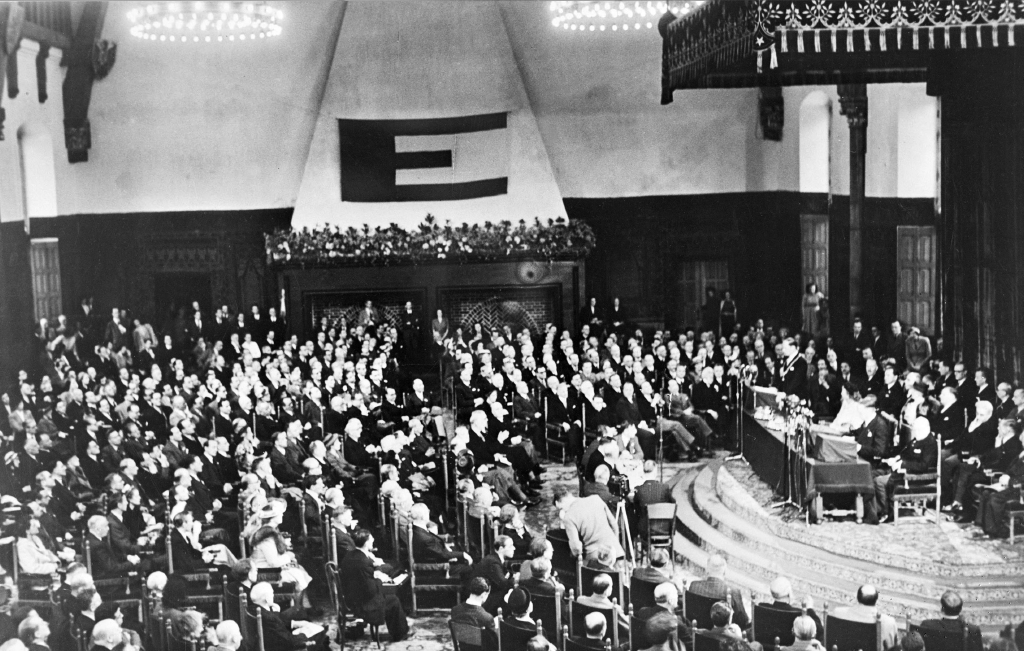 n Churchill, the congress was attended by 800 leading Europeans and delegates from 30 countries, including the 10 founder members of the future Council of Europe, as well as Germany, Austria, Greece, Iceland, Liechtenstein, Switzerland and Turkey. There were also observers from Bulgaria, Hungary, Poland, Yugoslavia and even the United States and Canada. All Europe was represented, and coverage by 250  journalists maximized the meeting’s media impact.

But a split soon developed between the “federalists” , who wanted a federal Europe , and the “Unionists”, who were determined to preserve state sovereignty.

The congress ended by recommending three things: Establishment of an economic and political union to ensure security and social progress; convening of a deliberative assembly; and preparation of a human rights charter with a European Court of justice to enforce it.

From London to Strasbourg

e and Belgium wanted a federal Europe while the United Kingdom saw intergovernmental co-operation as the answer. The second opinion carried the day and, on 5 May, 1949, the Council of Europe was brought into being by the Treaty of London, signed by 10 countries: Belgium, Denmark, France, Ireland, Italy, Luxemburg, the Netherlands, Norway, Sweden and the United Kingdom 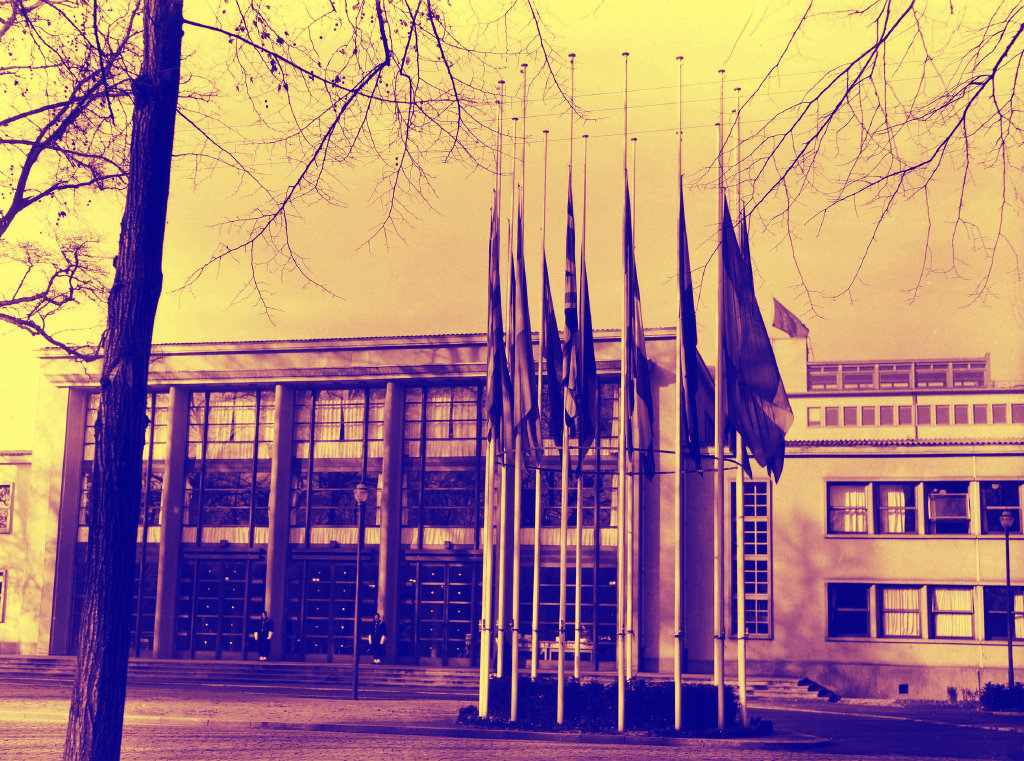 The Committee of Ministers met for the first time in Strasbourg on 8 August, and immediately invited Greece, Turkey and Iceland to join the new organization. Greece and Turkey did so the next day, and Iceland followed suit on 7 March 1950.

It was Ernest Bevin, British Foreign Secretary from 1945 to 1951, who suggested putting the Council in Strasbourg. He saw the Alsatian capital as a symbol of Franco-German reconciliation, essential to a peaceful future for the continent