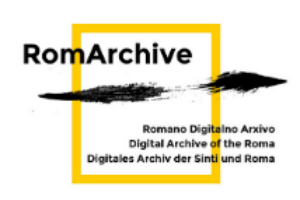 RomArchive, the Digital Archive of the Roma, makes arts and cultures of Roma visible, illustrating their contribution to European cultural history. Through narratives told by Roma themselves, RomArchive creates a reliable source of knowledge that is internationally accessible on the internet, thereby countering stereotypes and prejudices with facts.

The idea for RomArchive was based on intensive research and numerous interviews that the project initiators Franziska Sauerbrey and Isabel Raabe conducted with Romani artists, curators, activists and academics across Europe. This was made possible by the German Federal Cultural Foundation. Over the course of many conversations with Roma, it became clear that there was a need to create an internationally accessible site that makes Romani cultures and histories visible; this would make it possible to counter the recurrent stereotypes and entrenched prejudices with narratives told by Roma themselves.

It is not Roma who determine what image of them is circulated in public. Instead, the age-old clichés prevalent in the majority societies continue to dominate, with perennial ascriptions imposed by others which are characterised by a mix of fascination and disdain. There are virtually no positive counter-images or enlightened sources of information on Roma cultures and their genuine social realities. Ultimately, exclusion and contempt are also expressed in the fact that the many different Roma cultures remain largely ignored by European cultural institutions.

The principle of ‘Romani Leadership’ was followed in developing the RomArchive project: in all the key positions, Roma have defined and designed the Archive. Those involved in the project – including the assorted working groups this adds up to some 150 people from fifteen countries across Europe and further afield – formed a global network of cultural actors, scholars and activists, most of whom belong to the minority group.

Meeting regularly to discuss content-related issues, the project’s core group was made up of some forty individuals and included the curators of the ten Archive sections as well as members of the international advisory board, who were responsible for defining the project’s strategic guidelines. At these meetings held during the five-year planning and development phase, a diverse array of interests, cultural identities and national characteristics came together to discuss a common goal: how can self-representation be achieved despite all these differences? And how can counter-narratives be created that disrupt the perpetually recurring stereotypes?

Ultimately, RomArchive has succeeded in respecting this diversity, by telling scores of different stories, presenting a kaleidoscope of various cultures and situating them as an integral part of European cultural history.