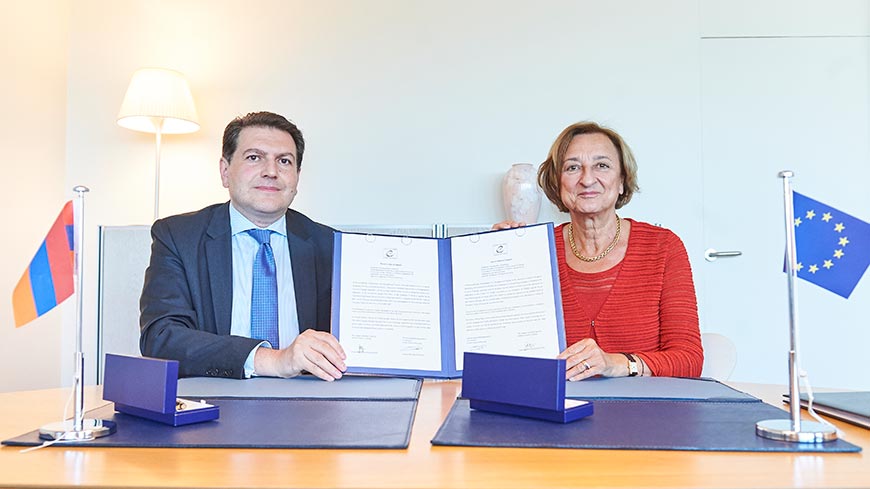 Armenia has become the 47th state to have completed the ratification of the Council of Europe’s Convention on Protection of Children against Sexual Exploitation and Sexual Abuse (“Lanzarote Convention”). The Permanent Representative of Armenia to the Council of Europe, Ambassador Paruyr Hovhannisyan, deposited the instrument of ratification in the presence of Deputy Secretary General, Gabriella Battaini-Dragoni. The Convention will enter into force in Armenia on 1 January 2021.

Ms Battaini-Dragoni said: “I welcome ratification of the Lanzarote Convention by Armenia. The Convention is a unique tool for preventing and fighting one of the most atrocious crimes, that is unfortunately still all too common in our society.”

The Lanzarote Convention has now been ratified by all Council of Europe member states except Ireland, and also by Tunisia. According to Christel de Craim, Chair of the Lanzarote Committee that monitors the implementation of the Convention, "The Lanzarote Convention is making a big difference helping governments across Europe and beyond to work together to tackle child sexual exploitation and abuse. Ireland is the one last missing piece of the jigsaw in Europe.”

One in five children under the age of 18 in Europe is a victim of sexual violence. The Lanzarote Convention obliges states to criminalise all kinds of sexual offences against children, including online, to protect victims and to prosecute perpetrators. It also requests countries, inter alia, to ensure that the statute of limitation for initiating proceedings regarding sexual offences against children continues for a sufficient period of time to allow the start of proceedings after the victim has reached the age of majority.