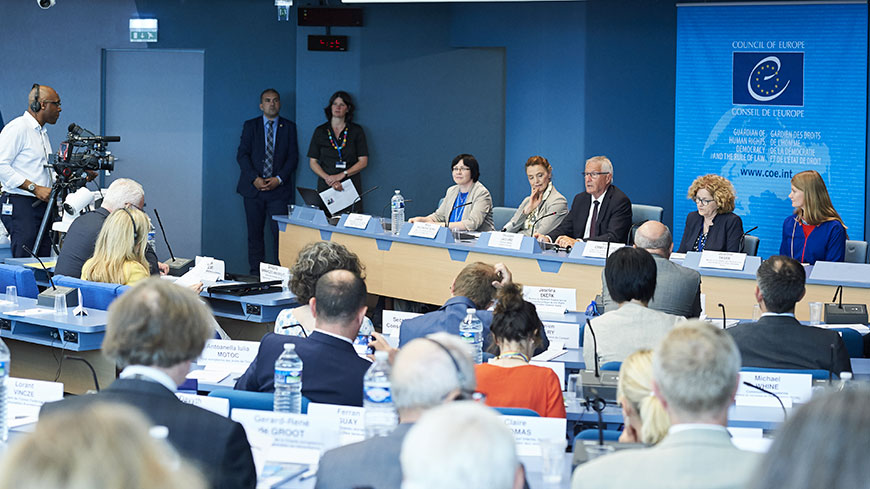 Chair of the Committee of Ministers, Marija Pejčinović Burić, Deputy Prime Minister and Minister of Foreign and European Affairs of Croatia and Thorbjørn Jagland, Secretary General of the Council of Europe opened a conference entitled “Minorities and Minority Languages in a Changing Europe” in Strasbourg on 18-19 June on the occasion of the 20th anniversary of the entry into force of the Framework Convention for the Protection of National Minorities and the European Charter for Regional or Minority Languages, the two key treaties of the Council of Europe in this area. Alongside Minister Pejčinović Burić and SG Jagland, Professor Vesna Crnić-Grotić, Chair of Committee of Experts of the European Charter for Regional or Minority Languages of the Council of Europe also participated at the opening of the conference.

In her address, Minister Pejčinović Burić pointed out that Croatia was among the first signatories of both documents, which only proves the importance it assigns to the question of protecting national minorities. She also mentioned Croatian legislation in this area, stressing that Croatia is among leading countries when it comes to the number of constitutionally recognised national minorities in Europe. In Croatia, this question is regulated by the Constitutional Act on the Protection of National Minorities which incorporates the provisions of the abovementioned instruments of the Council of Europe. Emphasis was also placed on the importance of dialogue with national minority representatives and the competent institutions in further advancing national minority rights.

“Today, around one in seven Europeans self-identifies as part of a national or linguistic minority,” said Secretary General of the Council of Europe Thorbjorn Jagland in his opening address. “Many of these are located in political hot spots where old hostilities or new disagreements can stir up tension. In these situations there is always the potential for the abuse of minorities’ rights.”

“In light of the range of recent challenges that Europe has faced, and the rise of extreme nationalism and xenophobia that we have witnessed, the protection of European minorities’ rights must remain a priority today,” he stressed.

Jagland warned of the “new and damaging trend” of states viewing national minorities’ protection more as a bilateral, rather than a multilateral issue, and seeking to redefine their identity at the expense of cultural, linguistic and ethnic diversity, which may push national minorities to identify more closely with their kin state. ”This is a vicious circle in which, ultimately, everyone loses,” Jagland warned.

The event is held under the Croatian Chairmanship of the Committee of Ministers of the Council of Europe; it takes stock of the evolution of the protection of national minorities’ rights and their languages over the past twenty years. Special focus is on the current developments shaping the situation of national minorities and languages, the role of language and education policies in the interplay between minority and official languages, as well as the opportunities offered by technological innovations to persons belonging to minorities.