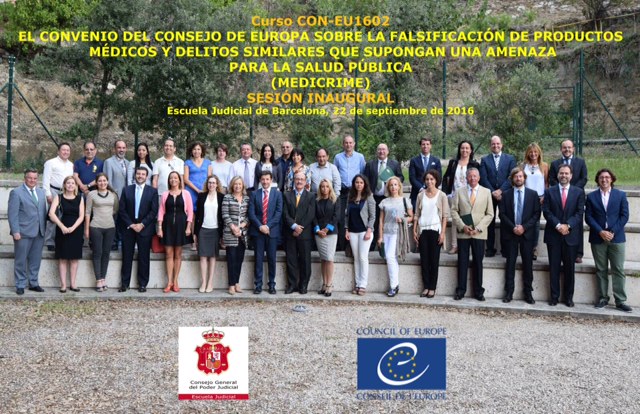 The European Committee of Crime Problems jointly with the Council of Europe HELP Programme has launched the training on the Council of Europe Convention against the counterfeiting of medical products and similar crimes involving threats to public health (the MEDICRIME Convention) in Spain, with the collaboration of the School of the Spanish General Council of Judiciary. This training aims at increasing the judges and prosecutor’s capacities to improve the national implementation of the MEDICRIME Convention.

The falsification of medicines and medical devices is one of the most difficult crimes to persecute though its expansion worldwide. This training takes into account the latest amendments to the Spanish Criminal Code in 2015. Spain was the 1st EU country having ratified the MEDICRIME Convention and the 2nd globally.

After welcoming remarks by the Spanish Judicial School Director, the MEDICRIME Convention was introduced to all participants. The HELP Programme and its methodology were explained with a view to familiarising participants with the interactivity of the HELP e-learning platform. The ‘Vigorali case’, an international criminal operation of counterfeit Viagra pills was passionately exposed by the Spanish first instance court judge who triggered an operation where ultimately 23 Million EUR were recovered.

The HELP course on MEDICRIME covers in a practical way key concepts of both the European Convention of Human Rights and the MEDICRIME Convention as well as its national implementation in the Spanish legal system. Case studies and judgments in this field both in Spain and at European level will be analysed. Finally, it also deals with practical aspects of international cooperation. It will be tutored by Silvia Mendoza Calderon, national coordinator of this training.

The Spanish Judiciary School is one of the strongest partners of the HELP Network and a solid partner of the Criminal Law Division of the CoE.

MEDICRIME Convention in the COVID-19 context

Medicines on the web - Risks and benefits