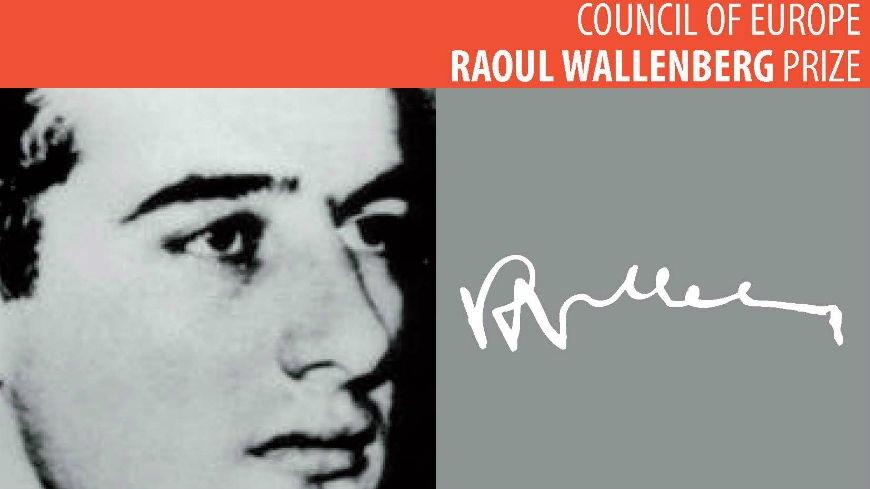 We would like to thank the Council of Europe for honoring us with the Raul Wallenberg Prize. We are also deeply grateful for all those that put forward and supported our candidacy.

“Agkalia” is a small, local group of volunteers based on the Greek island of Lesvos. It was founded by four friends almost ten years ago. One of these friends, Father Stratis, a prominent activist and peacemaker is no longer with us. “Agkalia” keeps doing its best solely on a volunteer basis and without funding from the Greek government or the European Union.

All these years we have seen a lot of suffering. Our country, evermore burdened by the so called financial crisis and austerity measures slips deeper into poverty. An ever greater number of our fellow compatriots is struggling for its daily survival. And Greece, as it is, has become the gateway from which hundreds of thousands of refugees are obliged to follow a deadly passage through the Aegean Sea, a passage organized and run by modern slavetraders. We have seen dead children. We have seen innocent families fleeing from the madness of war only to die a horrible and unfair death in the cold sea. We have seen fences being built and safe passages blocked. We have seen the rigid, inhuman face of the West demonizing “otherness”, creating the monsters it needs to consume. We have seen the Greek governments and the E.U. being incapable of stopping the unimaginable deaths in the Aegean Sea that continue to this very hour. We have seen the global community sanctioning rather than ending wars. Governments, coalitions, the civilized West as a whole can claim no innocence to the wars and the inequalities that torment our planet. The ghosts of extremism, terrorism and fascism are awakening.

What can four people do? What can anyone do before such great problems? Father Stratis, always said : “We can choose to love instead of hate”. We all knew that the only thing that is left is our dignity. We chose to love and loving means standing before the abyss without fear. The abyss that surrounds us and that also stems from within each one of us, is unbeatable. We cannot beat it but, as we have learned through many hardships, that is not the point. The point is standing one’s ground bravely. To love, to help, to try to understand the other without conditions. For us, this is the meaning of being human. This way, perhaps, a better humanity may be forged in the centuries to come.

Europe does not only has a rigid, inhuman face. From the Europe of People that are so different between them, from this Union, a face of solidarity has emerged. We have seen it these last month’s clearer than ever. When we were alone with thousands of refugees to take care, people from all over Europe came to our aid. They were there in our darkest hours, hundreds of them, sleeping in tents, leaving their cosines, fearing nothing, offering all they had to serve the weakest. Volunteers, simple citizens like us. Our urgent pleas through social media were never left unanswered. So many people from Europe and the world supported us in every imaginable way, making it possible for a handful to set-up help for tens of thousands in dire need. If anything, today, by accepting the Raul Wallenberg prize, we celebrate this enlightened face of a Europe that belongs to its People, that is shaped by its People, and we hope that this is the face that will thrive despite all odds. Our Europe of People does not build fences because it does not fear otherness, it becomes better through it. It does not create wars because it has learned by its history that plundering mentalities only create mass misery and destruction. Instead, our Europe of People is ready to set an example by offering. Our Europe of People chooses to stand united against discrimination of any kind, it chooses to show that the great problems of humanity can only be solved through solidarity.

One may ask : where is this Europe? Even this very moment, at the borders of Europe on the islands of the Aegean Sea, Greeks despite facing a great crisis, despite seeing their daily life getting even more difficult show the world that they can honor the meaning of the word “φιλoξενία” – hospitality, a word better translated with the phrase “to take care of the stranger”. From Eidomeni to Athens, from Lesvos to Samos, Chios, Ikaria, Leros, Kalymnos, Kos, Tilos and even as far as Cyprus along with the Greeks hundreds of brave volunteers from all over Europe stand before the abyss. All together, they are struggling day and night to save lives, to welcome those that flee death, to offer them hope. If anywhere, the heart of the European Union, its true heart of humanism beats there, strong. The leaders of the European Union and the world must understand that these people own a heart and a mind no one can trick and no one can corrupt. That these people will not tolerate one more death in the Aegean Sea, they will not stop protesting with all their might, that these people demand the European ruling elite to stop acting as a traditional world tyrant and oppressor. Europe cannot exist but as an honest coalition of People that has learned its valuable historical lesson after so much suffering. Only humanism and tolerance can bring better days.

These People, these Europeans, citizens from so many nations but in unison set the example as to how this can only be achieved : in solidarity. Utopia or not, we have seen it happening in Greece with our own eyes. What is happening in the borders of Europe - all these deaths of innocent refugees will echo in time as a great common shame but the solidarity that has there emerged will also echo as one of the brightest chapters of what happens when people do come together for a common noble cause.

To all our kind compatriots that offer lessons of humanity sharing their limited resources and courage with the refugees, to all the brave volunteers that stand their ground, to all Europeans that honor this Union of People through their activism and humanism, to all in every part of the world that strive for peace and justice by choosing to love instead of hate, to all those that have helped us in every way and most of all to the memory of our Father Stratis, whom we terribly miss, we dedicate this prize. Let it stand for the human face of a European Union we can struggle for.