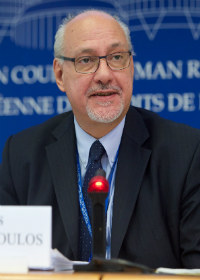 Welcome to our portal offering enhanced features for a better and more efficient on-line communication : easy share of information on the web and social media platforms, more user-friendly access to information, better ergonomy and optimisation for mobile devices.

Find complete information about our standard setting, monitoring and co-operation activities which are at the heart of the mission of the Council of Europe, as part of the new Europe and at the service of 700 million Europeans. I invite you to follow our headlines and to share them on the web and social media.

(Interview available only in French)

Christos Giakoumopoulos has been Director General of Human Rights and Rule of Law of the Council of Europe since 1 August 2017.

He was previously Director of Human Rights from 2011 to 2017 and also the Secretary General’s Advisor for Ukraine from June 2014 to September 2016. He was Director of Monitoring in the same Directorate General between 2006 and 2011.

Before joining the Directorate of Human Rights, he was General Counsel and Director General for Legal and Administrative Affairs of the Council of Europe Development Bank (Paris).

Since joining the Council of Europe in 1987, he held posts in the Registry of the European Court of Human Rights and the Directorate of Legal Affairs. He was Deputy Executive Secretary of the Venice Commission (1994-2002) and Director of the Office of the first Commissioner for Human Rights, Alvaro Gil Robles (2002-2004).