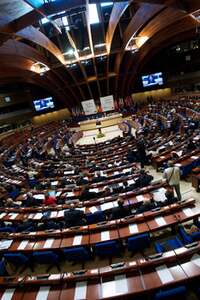 The 1954 European Cultural Convention highlights the need to study the history of each member State so as to improve mutual understanding; the Holocaust is a European heritage which has common roots in the European nations, and there is a European responsibility that should be accepted.

The activities of the Council of Europe with regard to the teaching of the remembrance of the Holocaust are defined in Recommendation Rec CM (2001)15, on “History teaching in twenty-first century Europe”, adopted by the Committee of Ministers on 31 October 2001 at the 771st meeting of the Ministers’ Deputies.

Teaching and remembrance
While emphasising the positive achievements of the twentieth century, such as the peaceful use of science towards better living conditions and the expansion of democracy and human rights, everything possible should be done in the educational sphere to prevent recurrence or denial of the devastating events that have marked this century, namely the Holocaust, genocides and other crimes against humanity, ethnic cleansing and the massive violations of human rights and of the fundamental values to which the Council of Europe is particularly committed. This should include:
- helping pupils to develop knowledge and awareness of the events – and their causes – which have cast the darkest shadows on European and world history;
- thinking about the ideologies which led to them and how to prevent any recurrence of them;
- shaping, developing and co-ordinating the relevant in-service training programmes for educational staff in the member states of the Council for Cultural Co-operation;
- facilitating access to the documentation already available on this subject, inter alia through the use of new technology, and developing a network of teaching resource centres in this field;
- implementing and monitoring implementation of the education ministers’ decision (Cracow, 2000) to designate a day in schools, chosen in the light of each country’s history, for Holocaust remembrance and for the prevention of crimes against humanity;
- developing the Council of Europe’s specific input in the education field to the Task Force for International Co-operation on Holocaust Education, Remembrance and Research.

The European Ministers of Education, meeting in Strasbourg at the Council of Europe on 18 October 2002, officially launched the "“Day of Holocaust Remembrance and Prevention of Crimes against Humanity” in schools"

Declaration by the European Ministers of Education (18 October 2002)