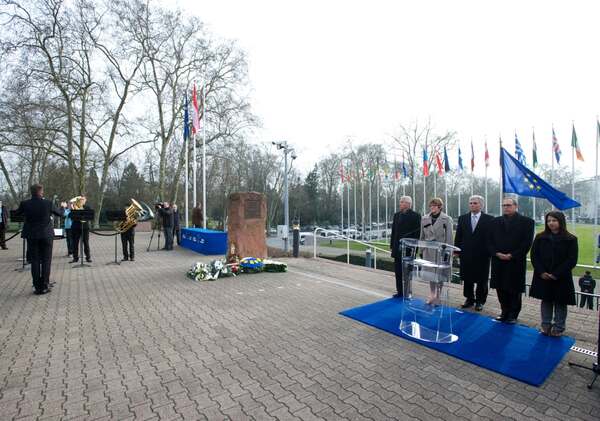 On the occasion of the International Day of Remembrance in memory of the victims of the Holocaust, a commemorative ceremony took place on Thursday 30 January 2014 on the forecourt of the Palais de l’Europe.

The Secretary General of the Council of Europe,Thorbjørn Jagland, started the memorial service. Statements were also delivered by Austrian Chancellor Werner Faymann, Parliamentary Assembly President Mrs Anne Brasseur, Nachman Shai, Chairperson of the observers' Delegation of Israel to the Parliamentary Assembly and by Sebihana Skenderovska, Deputy President of the European Roma and Travellers Forum (ERTF).

Wreaths were laid in front of the commemorative stone. The commemoration marks the liberation by Soviet troops of the largest Nazi concentration camp in Auschwitz-Birkenau in German-occupied Poland, on 27 January 1945.

An exhibition called: Auschwitz! Was danach? Que faire après? The aftermath? was also organised by the Permanent Representation of Luxemburg at the Council of Europe premises. This photographic reflection on the transmission of the history and memory of the Shoah by Paul Klensch (Luxemburg) took place from 28 January to 14 February 2014.