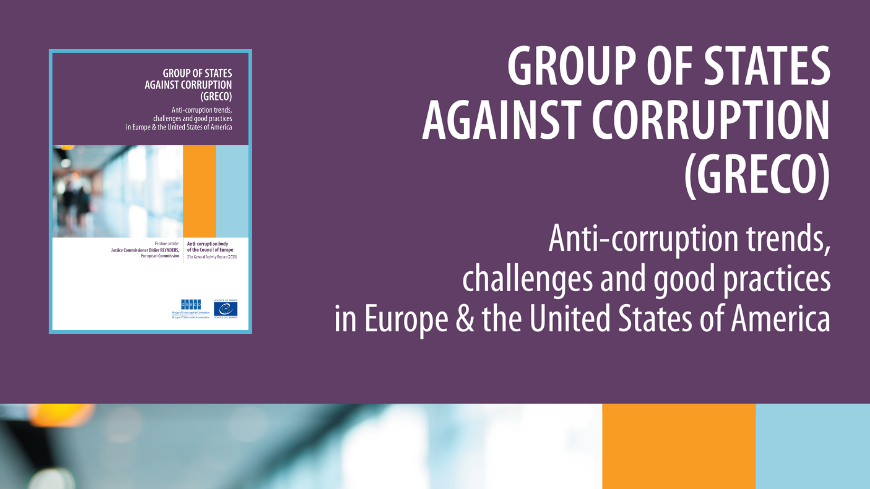 Governments should rigorously manage the corruption risks that have emerged due to the need to take extraordinary measures to combat the COVID-19 pandemic, including the infusion of large amounts of money into the economy to alleviate its economic and social impact, said the Council of Europe’s anti-corruption body GRECO in its annual report, published today.

GRECO underlines that for more than one year now governments have had to put in place emergency measures that have implied concentrations of powers and derogations of fundamental rights, measures which go hand in hand with corruption risks that should not be underestimated. These risks may be particularly pronounced in respect of public procurement systems when it comes to issues such as conflicts of interest and the role of lobbying.

Secretary General Marija Pejčinović Burić said: “In the challenging times we face, governments should step up their efforts to ensure that all policies and actions aimed at addressing the public health and economic crises meet anti-corruption standards. Adequate legislation and institutional frameworks to combat corruption are not enough. We must see these standards applied effectively in practice, and governments must act with transparency and accountability”.

In the report, GRECO’s president Marin Mrčela calls on states to closely follow the guidelines issued by GRECO in 2020 to prevent corruption risks in the context of the pandemic. “It is crucial that, in state of emergency situations, all decisions and procedures are designed with transparency, integrity and accountability”, he said.

Based on GRECO’s work in 2020, the president of GRECO also regrets that in some member states there are “conspicuous attempts” by the executive and/or the legislative powers to attack, intimidate or subjugate the judiciary. “When looking at the measures to prevent corruption, we must bear in mind that we should not see the fight against corruption as separate from, or even opposed to judicial independence. The first is essential to the second, and vice-versa”, he added.

The report reviews the measures to prevent corruption taken in GRECO’s member states in 2020 in its 4th round evaluation – which concerns parliamentarians, judges and prosecutors - and its 5th evaluation round, which focuses on central governments – including top executive functions - and law enforcement agencies.

The report features an article by the EU Commissioner for Justice Didier Reynders.

The Group of States against Corruption (GRECO) is a Council of Europe body that aims to improve the capacity of its members to fight corruption by monitoring their compliance with anti-corruption standards. It helps states to identify deficiencies in national anti-corruption policies, prompting the necessary legislative, institutional and practical reforms. Currently it comprises the 47 Council of Europe member states, Belarus, Kazakhstan and the United States of America.