International Conference “Supporting the implementation of the Istanbul Convention in Romania” 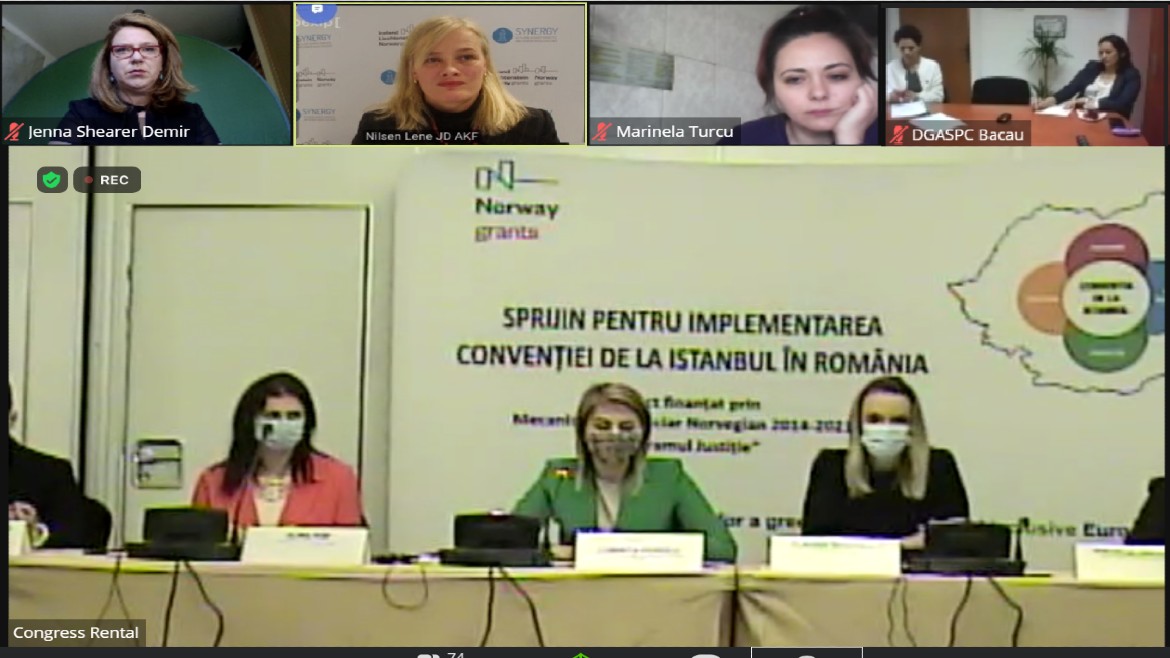 On 27 April 2021, the Council of Europe participated as a leading speaker in the on-line conference, “Supporting the implementation of the Istanbul Convention in Romania” held in support of a project focused on combating violence against women under the EEA/Norway Grants Romania Justice programme. The conference featured addresses by Luminița Popescu, the State Secretary of the National Agency for Equal Opportunities for Women and Men (ANES), as well as Alina Pop, the State Secretary of the Romanian Labour and Social Protection Ministry. Lene Nilsen from the Norwegian Ministry of Justice and Public Security commended ANES for their key role in the SYNERGY Network against Gender based and Domestic Violence.

Jenna Shearer Demir from the Council of Europe's Gender Equality Division addressed the 75 participants, underlining the relevance of the Istanbul Convention in the Covid-19 pandemic. Policies of isolation and confinement have led to increased levels of domestic, sexual and gender-based violence against women, and a heightened need for victim protection. The Committee of the Parties to the Istanbul Convention in their 2020 Declaration have affirmed that the Istanbul Convention is valid during periods of peace and conflict as well as health emergencies, and is a strong tool of standards and support to ensure that the needs of women and girls are met to achieve a life free of violence.

The conference was held in support of the project Supporting the Implementation of the Istanbul Convention in Romania, being implemented by ANES under the EEA/Norway Grants. Speakers included representatives from the Norwegian Secretariat of the Shelter Movement and St. Olav University Hospital, the Romanian National Institute of Forensic Medicine, Romanian Police, Public Ministry, National Institute of Magistracy, Romanian Women`s Lobby, European Women’s Lobby, Sibiu County Council, Bucharest General Directorate for Social Assistance and the Bucharest Intervention Center for sexual violence victims. The Romanian Institute for Social Research presented their study regarding the violence against women in Romania, produced under the project.

The Council of Europe cooperates on issues of violence against women and domestic violence with EEA/Norway Grants in the Romania Justice Programme as an International Partner Organisation, and is the main international partner in the SYNERGY Network.