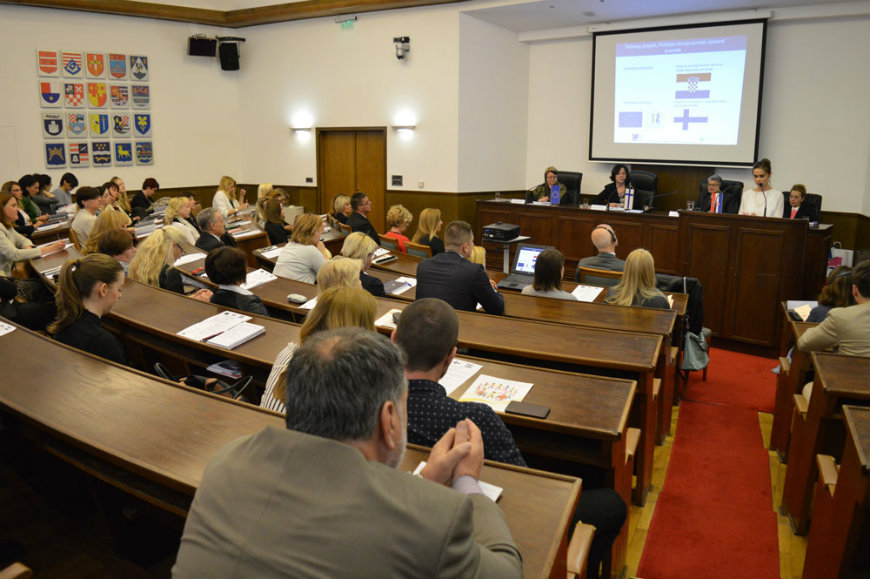 24-05-2016 - On May 24th Croatian Governmental Office for Gender Equality and the National Institute for Health and Welfare of the Republic of Finland, organized the opening ceremony of the 18 months long twinning project “Support to the Gender Equality” financed under EU Transition Facility Programme for Croatia. The kick-off event took place in the Croatian Parliament with the presence of several ambassadors to Croatia, the European Commission Representation to the Republic of Croatia, members of the parliament, representatives of the government, and the town of Zagreb, other stakeholders and the media.

The objective of this project worth € 600.000 is to develop Croatian institutional capacities for  coordinated  implementation,  monitoring,  and evaluation  of  national  and  international  gender  equality  principles  and  increase public awareness and trust in capacities of the country to protect their citizens from gender-based discrimination. Envisaged activities  will contribute to strenghtening  institutional mechanisms for gender equality; increase competence of civil servants to promote gender-sensitive public policies; influence efficiency of judiciary in the area of gender equality; and raise public awareness about legal protection from gender-based discrimination.

06-03-2014 - On the occasion of International Women's Day, the Head of the Croatian Gender Equality Office, Ms Helena Stimac Radin, presented on 6th March the Council of Europe Gender Equality Strategy 2014-2017, which they have translated into Croatian.

March 2016 - Campaign of the French Ministry of Sports, Youth, popular education and community life against sexist stereotypes in sport (French only)

Parity report: the "Haut Conseil à l’Egalité" calls on political parties to commit to power sharing between women and men.

HCEfh report “Parity in politics: between progress and stagnation” (French only)

08/08/2014 - A law promoting true equality between women and men, presented by the Minister of Women's Rights, Najat Vallaud-Belkacem, was finally adopted by the French Senate and National Assembly on 8 August 2014 . This new law addresses gender inequalities wherever they may still exist, work, home, separation, violence, responsibilities..... Read more

Women in decision-making in the field of education in Greece

02/05/2018 -The English version of the sixteenth comprehensive e-bulletin of the Observatory of the General Secretariat for Gender Equality (GSGE), i.e. the governmental organization in charge of equality between women and men, has been uploaded on its website and it deals with Greek women in decision-making in the field of education: .

Here are the key findings:

1) Generally, it is not uncommon to come across gender inequalities in the field of education; there still exist scientific fields and occupations that are dominated by either men or by women.

2) In the early stages of education (years 2-5), the majority of the pedagogues/instructors are women. A similar situation can be observed in Primary and Secondary Education, but to a lesser extent. Indicatively, according to the Hellenic Statistical Authority for the years 2014-2015, women make up 2/3 of the educational body in public high schools.

3) Even though 2/3 of the educational personnel consist of women, the rates of women at Director level positions are below 50% (the rates become even smaller if we do not consider women deputy directors). However, it is a positive fact that during the last few years the rate of women occupying these positions has been increased.

4) In a similar analogy, the representation of women in educational unions is very poor as well. We can observe that the presidents of the Boards of Directors in both Federations are all men. Moreover, we can see there are only 2 women in each one of the 10-member Boards. Also, in a total of 90 Boards of ELME (Unions for Teachers in Secondary Education), the presidents are made up of 74 men and 16 women (January 2018). The number of members in the Boards is 554 (377 men, 177 women) and for the total (presidents and members) we observe that between 644 individuals, 451 men and 193 women.

5) Continuing to the higher education, we can observe that even though more women than men hold a Master’s degree, women do not choose to continue with PhD studies. At this point we should remark on the rates of women who have completed their PhD studies (in 2015-2016 the 47,33%) compared to the ones that belong to the Teaching Research Staff in the Greek Universities (for the same academic year 2015-2016, 33,79%). The rates are becoming lower when we examine women-holders of position in Teaching Research Staff and they reach a disappointing rate of 20% as we move up on the Professor’s rank.

6) The uneven participation of women in decision-making positions in the field of education can also be seen in the administration of the Ministry of Education, Research and Religious Affairs. According to the official website of the Ministry (access 27/04/2018), the administration consists of only 2 women in a total of 8 individuals (Minister, Deputy Minister, 2 State Secretaries, 4 General Secretaries).

7) Summing up, we observe that results and conclusions of past studies in Greece and Europe remain valid till today:

- discrimination between women and men in various occupations still exists;

- despite the fact that women form the majority of the Educational personnel, the positions in administration belong mainly to men;

- female representation in Educational Federations and Unions is very low;

- especially in higher education, women are the minority of the Teaching Research Staff in the Greek Universities;

- in fact, the higher the rank is, the lower the number of women is in these positions;

- however, the increase of the rate of women Directors in secondary education is encouraging.

It is noted that the GSGE is implementing a flagship project on service organisation for the integration, monitoring and evaluation of gender equality policies in all aspects of public sector action. The aim is to support the public administration and local authorities in the design, implementation and evaluation of policies with detailed data on equality issues.

01/03/2018-Greece’s General Secretariat for Gender Equality is organising a conference on 5 April 2017 aimed at the dissemination of a new Protocol of Cooperation and awareness-raising among competent stakeholders and citizens on the country’s policy in favour of female refugees and their children without sexual and gender-based violence. The Protocol has been signed by a number of public agencies, including the Ministry of National Defence; the General Secretariat for Public Health; the Association of Greek Regions and the Central Union of Municipalities.

Link to the conference programme http://www.isotita.gr/en/var/uploads/2017/PROGRAMME_Hmerida_05Apr2017.pdf

A Protocol of Cooperation has been activated between the General Secretariat for Gender Equality (GSGE), the Research Centre for Gender Equality (an entity supervised by the Ministry), the National Centre for Public Administration & Local Government and the Ministry of Education, Research & Religious Affairs on the promotion of gender equality in the primary education (a number of training seminars to the educational personnel of primary schools are in the process of implementation throughout the country, so that the principles of equality and non-discrimination between the two sexes are perceived by the young generation at a very early stage); the issue of digital literacy can be included in the curricula of the training seminars aiming at the development of methods and tools for the advancement of gender equality from an early stage.

It is noted that the bilateral cooperation between the GSGE, i.e. the governmental organization in charge of equality between women and men in Greece, and the Ministry of Education has been extended to all three educational levels (primary, secondary and tertiary education).

An "Observatory on Gender Equality" has been set up in the General Secretariat for Gender Equality.  The Flagship Project is entitled "Service organization for the integration, monitoring and evaluation of Gender Equality Policies in all aspects of Public Sector's Actions (Observatory)"; its aim is to support Public Administration and Local Governments to design, implement and evaluate policies concerning gender equality through detailed gender-segregated data on equality issues (statistics and surveys) deriving from the development and function of relevant tools. The issue of digital literacy and ICT is concisely included in the competences of the GSGE Observatory.

The basic characteristics of the “National Programme on Preventing and Combating Violence Against Women”, which refers to all forms of gender based violence (e.g. domestic violence, rape, sexual harassment, trafficking in women), are the following:

15-07-2014 - Greece recently won a major international award in the category of “digital opportunity” for the National Initiative of the General Secretariat for Gender Equality of the Ministry of Interior entitled “Women and Girls Go Digital” (press release). The WITSA Global ICT Excellence Awards is a biannual event for the recognition of excellence in digital technology, established by the World Information Technology and Services Alliance. The award for the “Women and Girls Go Digital” Initiative in the category of “digital opportunity” was announced on September 30th 2014, as part of the 19th World Information Technology and Services Conference held in Mexico. The WITSA Global ICT Excellence Awards are granted to institutions and enterprises that capitalize on ICT innovation for the benefit of the public sector and the citizen, creating new opportunities for employment and sustainable development. The “Women and Girls Go Digital” is a multi-stakeholder public-private initiative, which kicked off in April 2014 in the framework of the Hellenic Presidency of the Council of the European Union, aiming at boosting female entrepreneurship and employment in the ICT and the digital economy sectors.

Gender Equality in the Report by the Secretary General of the Council of Europe "State of Democracy, Human Rights and the Rule of Law in Europe” issues

15-07-2014 - The General Secretariat for Gender Equality, (the governmental organization in charge of equality between women and men in Greece), has published in its website, in both English and Greek (see under News), the recent Report by the Secretary General of the Council of Europe entitled "State of Democracy, Human Rights and the Rule of Law in Europe". Special emphasis has been given to the gender equality issues in this Report.

National Commission for the Promotion of Equality (NCPE)

16/03/2015 - The political leadership of the Republic of Moldova recognises the need to promote gender equality in the society; a number of government documents were adopted in this area. Read more

The 6th Congress of Women in Poland took place in Warsaw from 9-10 May 2014 and focused on “Equality in Business”. For more information watch a short film from the Congress.

01-07-2014 - The Portuguese Commission for Citizenship and Gender Equality has recently translated and published the Council of Europe Recommendation on Gender Equality and media and also the handbook "Women and Journalists First".

Serbia to establish a Co-ordination body for gender equality

02/2015 - The Swedish government is spending SEK 26 million to support the gender equality work in 41 government agencies. It is a diverse group of agencies that over a period of four years will receive unique support from the Swedish Secretariat for Gender Research in their gender mainstreaming work.

Preventing and Combating Violence Against women and domestic violence: tasks and activties of the Conferedation for the implementation of the Convention of the Council of Europe (Istanbul Convention) (2019) (available only in French)

What is new in this update:

To make the texts and content of international agreements, UN resolutions and other documents relating to women's human rights more easily accessible, Switzerland has developed a new application for smart phones and tablets.

Swiss Position on a Framework for Sustainable Development Post-2015

26-06-2013 - Switzerland promotes both a stand-alone goal on gender equality and a transversal approach, integrating gender-sensitive targets in the formulation of other goals consistent with the Council of Europe Gender Equality Strategy.

Swiss Position on Gender Equality in the Post-2015 Agenda