Gender Equality Commission adopts draft Recommendation on protecting the rights of migrant, refugee and asylum-seeking women and girls and hosts high-level panel on violence against women 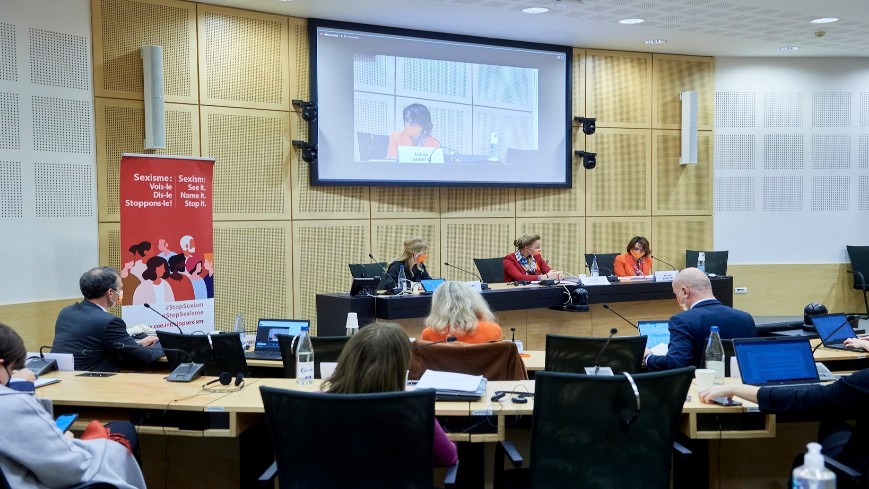 The Gender Equality Commission (GEC) held its 20th meeting from 23 to 25 November 2021, online and in Strasbourg on 23-25.11.2021. After two-years of preparations and negations within the Drafting Committee on Migrant Women (GEC-MIG), the GEC approved the Draft Recommendation on protecting the rights of migrant, refugee and asylum-seeking women and girls. The text, which aims to promote the integration of a gender equality perspective in migration, integration and asylum policies, in order to better respond to the needs and challenges faced by all migrant women and girls, will be transmitted to the Committee Ministers at the beginning of 2022 for discussion and final adoption.

On the occasion of the celebration of International Day for the Elimination of Violence against Women (25 November 2021) and under the aegis of the Italian Presidency of the Council of Europe, the GEC hosted a high-level panel bringing together the Secretary General of the Council of Europe, Marija Pejčinović Burić, Italian Minister for Family and Equal Opportunities Elena Bonetti, and ), Iris Luarasi , President of the Group of Experts on Action against Violence against Women and Domestic Violence (GREVIO). The Secretary General stressed the importance of the Istanbul Convention as a golden standard that helps member States to implement a holistic approach to combat violence against women. The Italian Minister highlighted the need to keep a continuous focus on the topic and explained how the Istanbul Convention had been implemented in Italy, notably through the adoption of a comprehensive action plan. The President of GREVIO shared some of the achievements of the Istanbul Convention in the last 10 years, including the fact that additional forms of violence against women have been criminalised in different state parties, the setting up of helplines in many countries and the increase in convictions of perpetrators.

The Council of Europe Secretary General also highlighted the different other ways, in which the Council of Europe has been active in combating violence against women and promoting gender equality, notably through the important work of the Gender Equality Commission, which developed standards such as the Recommendation CM/Rec(2019)1 on preventing and combating sexism and the Draft Recommendation on protecting the rights of migrant, refugee and asylum-seeking women and girls, and through Gender Equality Rapporteurs working as “ambassadors” for gender equality in all steering committees of the Organisation. The Secretary General also mentioned concrete tools such as training courses for the legal professionals on violence against women and access to justice for example (HELP courses). Minister Bonetti stressed that combating violence against women should be considered as a shared priority with education on sexism and gender stereotypes for boys and girls as leverage to be used to promote cultural change from the youngest age. Finally, Ms Luarasi, GREVIO president mentioned the latest tool adopted by GREVIO on 24 November, General Recommendation No.1 on the digital dimension of violence against women, to look more closely at different forms of violence against women when they take place online.