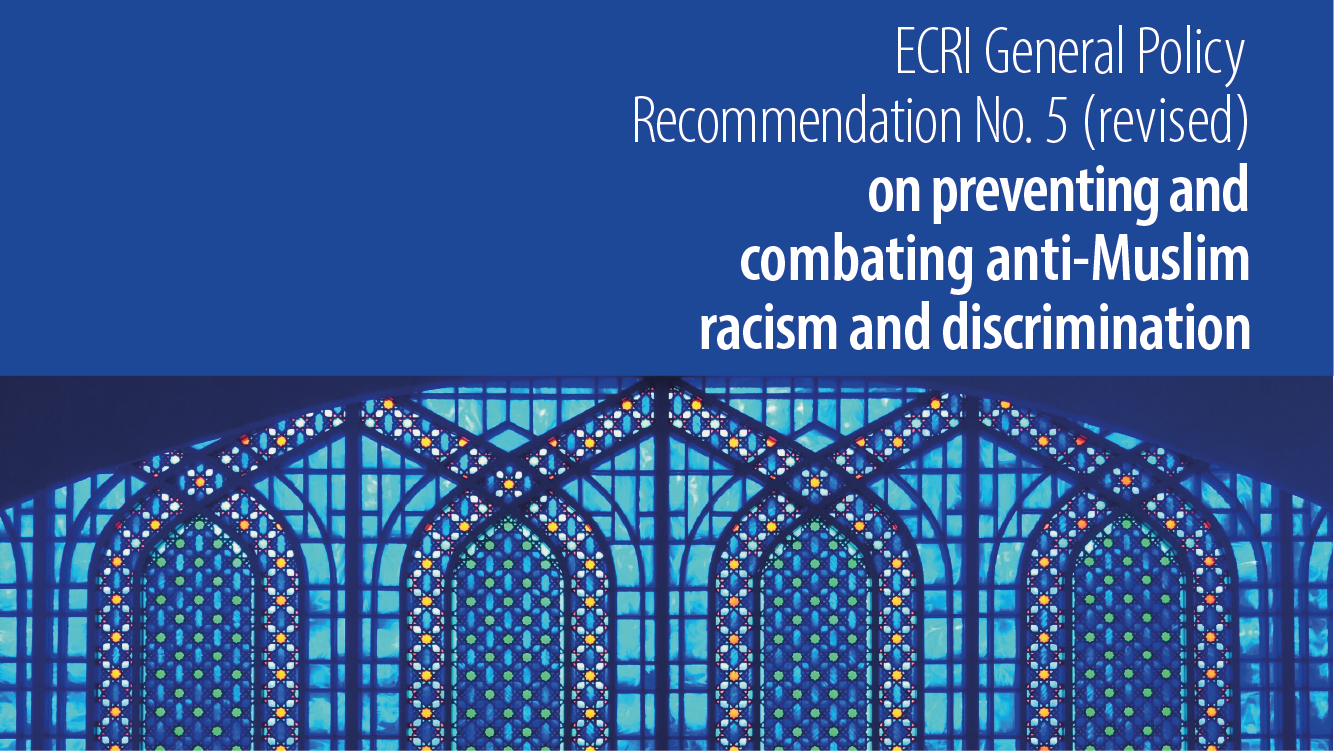 In its new Recommendation, ECRI underlined that Muslims are part and parcel of Europe’s diversity, to which they have contributed for centuries, and recalled that collective action was needed to build inclusive societies that bring communities and individuals closer together and ensure equal dignity and mutual respect through shared democratic values.

ECRI noted with concern in recent years that anti-Muslim hatred and prejudice have often been prevalent in society, dispersing across institutional, political, social and economic life. ECRI therefore decided to provide comprehensive guidance to governments on how to address anti-Muslim racism and discrimination in four specific areas: i) policies and institutional coordination, ii) prevention, iii) protection, and iv) prosecution and law enforcement.

In the area of policies and institutional coordination, ECRI underlines that governments should give a high priority to the fight against anti-Muslim racism, through relevant action plans, any necessary legislative measures or review, and where appropriate by appointing coordinators and setting up dedicated independent monitoring groups or committees.

ECRI considers that governments should also place particular emphasis on prevention. It is crucial that political actors, opinion leaders, and other public personalities take a firm public stand against anti-Muslim racism in its various manifestations. Furthermore, governments should take the necessary measures to eliminate discrimination against Muslims in access to education and in employment, including by paying increased attention to the situation of Muslim women.  There is also a need for promoting learning about the diversity of Muslim life and Muslim history and the positive contribution of Muslim persons, communities, and culture to European societies. In the view of ECRI, governments should also engage with social media networks to work together on initiatives that could help propagate balanced narratives about Muslims and Islam on social media platforms.

Regarding protection, the authorities should ensure the safety of Muslims, Muslim communities, and their institutions by promoting cooperation between them and law enforcement authorities. In addition, it is strongly recommended to improve cooperation and dialogue with Muslim communities in determining and implementing security measures that meet their concerns and needs.

In the field of prosecution and law enforcement, ECRI recommends that anti-Muslim crimes committed online are punished just as crimes offline and are adequately addressed by means of effective prosecution and other measures. Illegal anti-Muslim hate speech must also be removed promptly and consistently by internet service providers, in accordance with the relevant legal and non-legal framework.

ECRI’s first General Policy Recommendation on this matter was published in 2000. In preparing the present revised General Policy Recommendation, ECRI consulted a wide range of partners, including civil society organisations, academics, equality bodies, government officials, local authorities and representatives of the United Nations, the Organisation for Security and Co-operation in Europe and the European Union, as well as the Council of Europe Secretary General’s Special Representative on antisemitic, anti-Muslim, and other forms of religious intolerance and hate crimes.

Interview with Domenica Ghidei Biidu on ECRI revised General Policy Recommendation No. 5 on preventing and combating anti-Muslim racism and discrimination