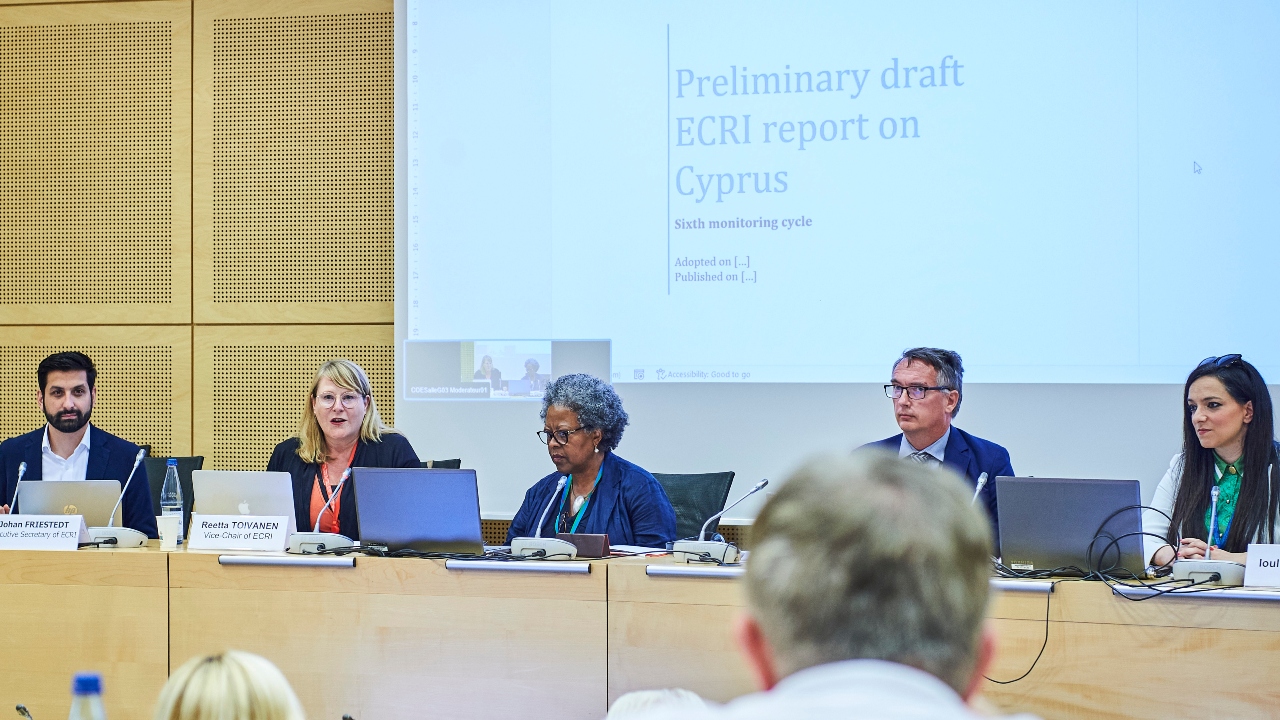 As part of its sixth country monitoring cycle, ECRI examined its preliminary draft reports on Cyprus and Hungary, and adopted its reports on Bulgaria, France and Greece. It also adopted its conclusions on the implementation of priority recommendations addressed to Albania, Austria, Belgium, Germany and Switzerland.

During its meeting, ECRI held an exchange of views with Iris Luarasi, President of the Council of Europe’s Group of experts on action against violence against women and domestic violence (GREVIO).

ECRI also took note of the statements made by Michaela Moua, Anti-Racism Co-ordinator of the Commission of the European Union, by Petra Bayr, General Rapporteur of the Parliamentary Assembly of the Council of Europe on combating racism and intolerance and member of the Assembly’s Committee on Equality and Non-Discrimination, by Ahmet Yildiz, member of the Assembly’s Committee on Political Affairs and Democracy and by Guillaume Drago, observer in respect of the Holy See.

On 30 June, the Chair of ECRI, Maria Daniella Marouda, held an annual exchange of views with the Committee of Ministers of the Council of Europe. She referred to the statements adopted by ECRI in 2021 and 2022, which dealt with ultra-nationalistic and racist hate speech and violence in and around conflicts and with the consequences of Russia’s aggression against Ukraine. She indicated that ultra-nationalistic political discourse and propaganda in Russia led to the immense suffering of the Ukrainian people. She also underlined that Russian leaders’ depiction of Ukrainians fighting for their country as neo-Nazis was absurd, nauseating and an affront to the memory of the millions of victims of nazism during the Second World War and those who fought against it. She advocated for a renewed commitment of the Council of Europe member states to the Organisation’s principles. “The problem is not our standards. The problem is not about our monitoring capabilities. The problem is that a member state, the Russian Federation, deserted the basic principles of this Organisation”, she said. “It is therefore crucial that the now 46 Council of Europe member states demonstrate that they are deeply attached to all that this Organisation stands for, including effective equality for all and respect for diversity and that they fully cooperate with Council of Europe monitoring bodies like ECRI. To this end, each government should be able to hear the good, the bad and even the ugly”, she went on to say. Whilst referring to the exemplary reception of Ukrainians fleeing from war, she recalled that all people in need should be offered protection and support, wherever they come from, irrespective of their skin colour, national or ethnic background or religion. She also pointed to the need for addressing the negative impact of the Covid-19 pandemic on the most vulnerable, including Roma and migrants, racism in policing and the situation of LGBTI communities in some parts of Europe.