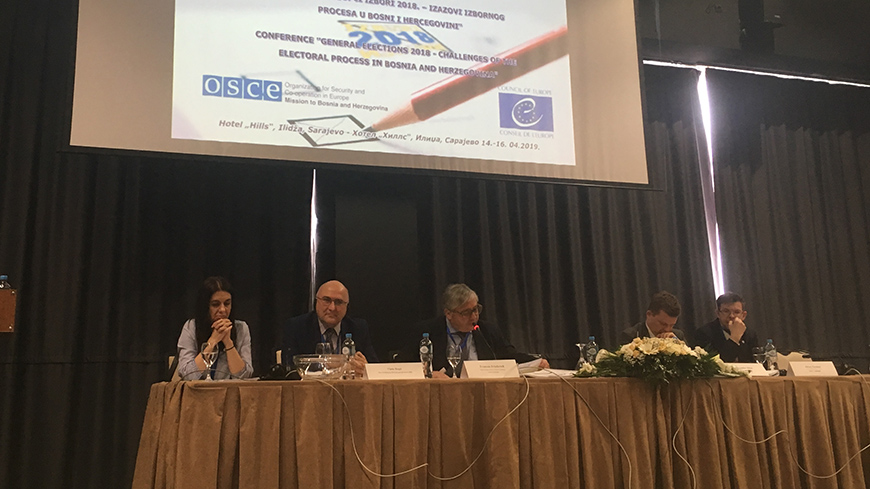 After the presentation of the election observation report of the Parliamentary Assembly of the Council of Europe and of OSCE/ODIHR, this event gave the opportunity for the electoral stakeholders to discuss the current challenges to enhance the electoral process. Three plenary sessions were organised to facilitate the discussion: the integrity of the central voters’ register, the polling stations committees and the entry and control of electoral results.

Mr François Friederich, Head of Electoral Assistance Division of the Council of Europe, presented the activities of assistance prior to the 2018 General Elections implemented in cooperation with the Central Election Commission of Bosnia and Herzegovina, the Agency for Gender Equality of Bosnia and Herzegovina, the Association of Blind of Canton Sarajevo and Bonaventura Sarajevo. This presentation was also the occasion to develop the main conclusions of the election observation mission report of the Parliamentary Assembly of the Council of Europe.

During this two-days discussion, the major problems issued by the election commissions were the lack of financial resources and the late resignation of the polling stations commissioners. In their conclusions, the Central Election Commission of Bosnia and Herzegovina explained among others that the voter education and the rulebook on record of results will be enhanced.

During the discussions, new voting technologies have been also seen as a possibility to enhance the practicability and effectiveness of the electoral process.

The post-election conference was jointly organised by the Council of Europe and the OSCE Mission to Bosnia and Herzegovina.