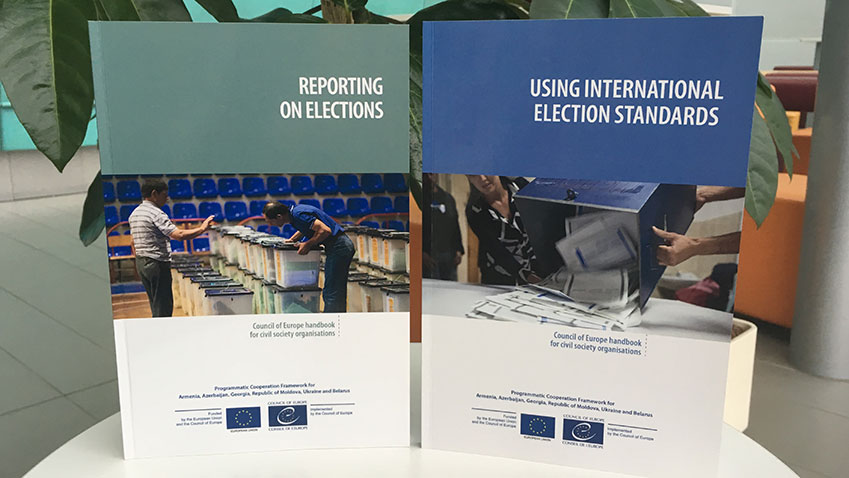 The handbook Reporting on elections aims to help observers become more efficient and to produce more effective reports, specifically focusing on the reporting of core team members. At the same time, it also covers the reporting of long- and short-term observers. It deals mainly with final election reports and reports/statements on preliminary findings, while also providing insight into interim reports and ideas for ad hoc reports and press releases, in addition to tips on how to follow up on recommendations. This handbook gives an overview of the planning of observation activities from a reporting perspective: the scope of election observation, assessment of the organisations’ reporting capacities, key observation principles and what observers could focus on, how to assess the reporting capacities of one’s own organisation, and how to conduct training on reporting.

The handbook Using international election standards, drafted in collaboration with civil society organisations from the countries of the Eastern Partnership, is a response to the recommendation set out in the 2015 report by the Secretary General of the Council of Europe entitled State of democracy, human rights and the rule of law in Europe. Its purpose is to improve the quality of domestic observation of electoral processes in the member states and to serve as a reference for domestic observers, primarily for core team members. At the same time, it may serve as a training tool for long-term and short-term observers and other electoral stakeholders who wish to familiarise themselves with international election standards (government officials, electoral administration, party representatives, judges, lawyers). The Council of Europe is convinced that this handbook will further promote the uniform application of Europe’s electoral heritage and of other international standards in its member states and beyond.