Until lions have their historians, tales of the hunt shall always glorify the hunters.

• Right to life, liberty and security of person
• Right to take part in cultural life
• Freedom of thought and conscience

Make a large piece of paper (to measure approximately
1.5m x 1.5m) by taping together several pages of flipchart paper.
It needs to be big enough for all members of the group to be able
to find a place around it. Draw a faint line down the middle.

1. Make sure everyone knows what a "tag cloud" is and explain that the group will be creating a non-electronic tag cloud to illustrate the associations and memories evoked by public war memorials.
2. Ask people to think, individually, about a national memorial in the locality that was erected in remembrance of a war, for instance the Second World War. They should try to recall what it looks like and identify the feelings, ideas and associations – both positive and negative – that that memorial evokes in them.
3. Invite everyone to take a coloured marker and find a place around the paper. Still working individually, they should now put their individual "tags" onto the common sheet of paper, according to the following general principles:
a. Tags are entirely individual: they are simply how you perceive a certain object.
b. Negative associations should be written to the left hand side of the centre
line; the more negative they are, the further out towards the left edge of the
paper they should be.
c. Positive feelings should be written on the right hand side of the page; the
more positive they are, the further out towards the right edge of the paper.
d. Feelings that are strongly evoked by the memorial should be written in larger
(stronger) text than feelings that are only evoked weakly.
4. When participants have recorded their tags, ask them to sit back and look at the collective results. Ask:
a.   Are there any strong messages or patterns in the "cloud"?
b.  Are they surprised by any of the tags?
c. Are there more positive than negative feelings evoked, or vice versa?
d. Which tend to be the strongest feelings evoked?
e.  Is this the way you think the war should be remembered by future generations? What is missing – or where does the balance need to be redressed?
5. Now invite participants to take the markers again. This time they should think not about the actual, existing memorials, but about an imaginary memorial that would send – for each of them – the most important messages about the war. They should repeat the process of tagging that they went through before, again placing their tags individually on the same sheet where they placed their first messages. Explain that the first tag cloud is now a public space and cannot be erased, so the new tags should be placed on top of the first ones.
6. When the "cloud" is complete, invite participants to look again at the whole picture and then go on to the debriefing and evaluation.

Start by discussing the process of making the tag cloud and then go on to address issues relating to remembrance and human rights:

You may wish to play around with colours. For example, you could suggest that all negative associations are written in black and all positive ones in another colour; or you could use darker and lighter shades moving further away from the centre line; or if you want the second cloud to stand out from the first, you could request that all tags for the first cloud be written in one colour, and that all tags added in step 5 in a different one.

You can use photographs of memorials if you think they will help, but you may find it more effective to ask participants to complete the first tagging stage from memory; it will really test which messages are most persistent!

Keep the first debriefing (at point 4) short. Use it to try to bring out different ideas relating to the way the past is remembered and to stimulate creative thinking on alternative types of memorials. If people feel that the first cloud accurately represents the way they would like the events to be remembered, try using some of the ideas in the background information on the theme of Remembrance in chapter 5.

During the second tagging stage allow people freedom to adapt or alter the existing cloud as they wish and to discuss ideas with each other – even if their work should ultimately be individual.

There should still be plenty of space for adding new words in the second round. You may feel that the cloud is likely to become muddled, but that reflects what happens when you tag in real life – you are stuck with what other people have previously tagged. Putting the new words over the old ones may help to communicate the message that perceptions are very cultural, and because everyone else thinks in a different way, it's hard to get your voice heard. However, if you think it will make it easier for your group to analyse their ideas and feelings, then feel free to make two separate cloud tags.

Instead of writing directly on the paper, people could write their tags on labels that can easily be moved. This will enable changes to be made during the second stage of tagging, for instance placing similar tags near to each other for greater prominence.

You can use other events in history if this seems more appropriate than the Second World War – for example, the Holocaust, the First World War, a civil war or a regional war. The only important thing is that these events should be commemorated in some public way.

It would be interesting for the young people to compare their perceptions of the War with those who lived through it. You could break the activity after the first tag cloud and let the participants interview members of the older generation about how they would like the War to be remembered by future generations and whether the existing war memorials are satisfactory in their view.

You can use the idea of making a tag cloud (manual or electronic) as a follow-up to many of the other Compass activities, especially when you want to create some sort of visual material for an exhibition.

Alternative key dates are, for example, 27 January, Holocaust Memorial Day or 23 August, International Day for the Remembrance of the Slave Trade and its Abolition.

Make a survey of your locality to count the numbers of streets that are named to commemorate army commanders or famous battles and the number of streets named after famous people who worked for peace. Find out who in the municipality decides how to name streets and suggest some people you think should be commemorated.

If the young people are interested to see what their tag cloud really looks like you could ask for 2 volunteers to type the tags up into a document and paste into the screen at http://www.wordle.net/create. They can then print it out, or save to the public gallery as a record of their thoughts about memorials.

You may like to look at the activity "Just a minute" where you will find a suggestion to consider the issues surrounding remembrance and Hitler's Olympiastadion in Berlin, and what should be done with the building.

If the group would like to think about our heroes and heroines and what we remember and respect them for, you could run the activity "Heroines and heroes".

Even if you run the activity as one session, the young people could still be encouraged to speak to people of the older generation and be better informed.

Hold a memorial event to commemorate a hero who worked for peace. It could be a festival with music and dance, an exhibition or a "happening" where you build a collective monument to remembrance. Advertise the event and ask people to contribute an item that for them which symbolises remembrance. It could be anything, for example a white poppy, a photograph of a relative lost in war or the shoes worn by someone when they first arrived in your country and claimed asylum.

A "tag cloud" or "word cloud" (or "weighted list" in visual design) is a visual depiction of "tags" or keywords. Normally the words are listed alphabetically and the importance of a tag is shown with font size or colour; thus the tag cloud can be thought of as a creative graph. On the Internet, where the idea was developed, the tags are usually hyperlinks that lead to a collection of items that are associated with the tag.

Example of a tag sheet 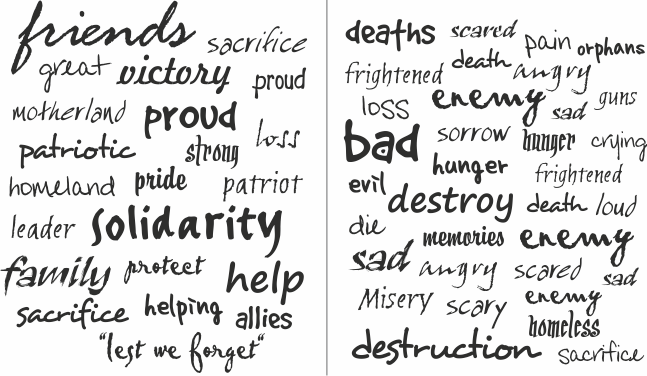