The project on supporting Ukraine in the execution of judgments of the European Court of Human Rights was funded by the Human Rights Trust Fund and managed by the Justice and Legal Co-Operation Department of the Directorate General of Human Rights and Rule of Law.

This project provided significant contribution to the Ukrainian authorities in establishing a solid connection between the process of policy development at national level and the implementation of general measures required for the execution of the European Court of Human Rights judgments (ECtHR). With the help of the project, the relevant legislation and court practice was brought in closer and better compliance with the Council of Europe standards and recommendations. Furthermore, the most serious issues of the judiciary, including the non-execution of judgments and lengthy judicial proceedings, strengthening judicial independence and ensuring effective mechanisms of interaction with the ECtHR, were raised to the highest political level and included in the agenda of the main project beneficiaries.

With the support of the project, the root causes of the problem of non-execution of national judgments in Ukraine were identified and the draft national strategy for the execution of the general measures of the Ivanov/Burmych judgments was developed.

The Project ensured that the principles of external and internal independence of the judiciary became a part of the message that is disseminated by the High Council of Justice through its annual reports on the status of judicial independence in Ukraine, and that the system of disciplinary accountability of Ukrainian judges are in compliance with the Council of Europe requirements and standards. Moreover, the project helped to analyse new procedural legislation in the context of the problem of lengthy judicial proceedings, and provided recommendations for the introduction of the necessary remedies.

Finally, the project assisted the Supreme Court with the preparation of the procedure for the application of Protocol 16 to the European Convention on Human Rights and monitored the Supreme Court practice on re-opening of judicial proceedings following the ECtHR judgments. 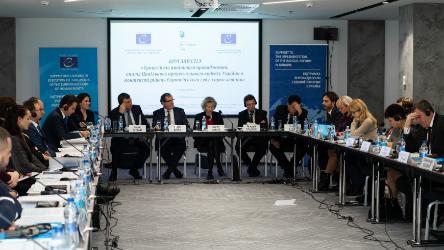 Civil Procedural Code of Ukraine and its impact on the length of the civil proceedings: discussion during the round table

On 13 December 2018, a round table «The length of civil proceedings: analysis of the Civil Procedural Code of Ukraine in the context of judgments of the European Court of Human Rights» was held in Kyiv. The event was jointly organised by the Supreme Court and by Council of Europe projects...