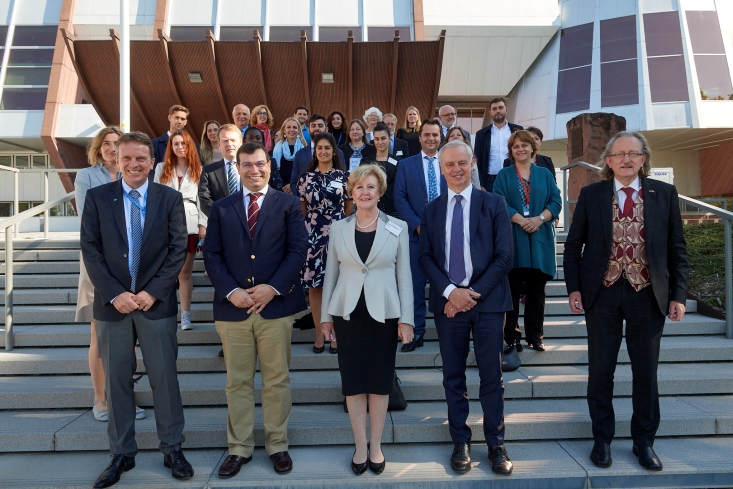 Strengthening efforts to end statelessness in Europe and guarantee the provision of fundamental rights to everyone was the key theme of the events organised on 23-24 September in Strasbourg by the Council of Europe’s European Committee on Legal Co-operation (CDCJ) and UNHCR, the UN Refugee Agency. The international conference brought together over 130 senior representatives of governments of member States, national authorities with specific expertise in nationality and statelessness issues, judges, representatives of international and regional organisations, civil society organisations and academics, as well as stateless individuals.

Statelessness remains a significant issue both globally and in Europe. It is estimated that more than half a million people in Europe are stateless or have undetermined nationality. The right to a nationality is reflected in numerous international treaties, including the Council of Europe’s European Convention on Nationality based on the principles of prevention of statelessness and non-discrimination. The right to a nationality constitutes part of a person's social identity and is considered a gateway to the enjoyment of a range of other rights, including access to education, employment, health care, housing and freedom of movement.

The causes of statelessness are multiple, including complexities in nationality laws, State succession, forced displacement, historical and contemporary migration, structural birth registration problems, gaps in nationality and administrative practices. The lack of nationality has a serious impact on the lives of stateless people. The COVID-19 pandemic has certainly aggravated their already marginalized situation and exacerbated existing inequalities.

While there has been significant progress towards implementation of the Global Action Plan to End Statelessness, including through the implementation of pledges made at the 2019 High-Level Segment on Statelessness, challenges remain, more needs to be done in Europe to achieve the goals of the #IBelong Campaign to end statelessness by 2024. “This Conference plays an important role in inspiring collective action. Indeed, with a spirit of partnership, we can make statelessness a fact of the past”, said Gillian Triggs, UNHCR’s Assistant High Commissioner for Protection, who spoke at the event.

The Special Representative of the Secretary General of the Council of Europe on Migration and Refugees, Drahoslav Štefánek, said: “Stateless persons are particularly vulnerable, subject to States’ obligation to provide them with special protection and assistance. The new Council of Europe Action Plan on Protecting Vulnerable Persons in the Context of Migration and Asylum in Europe (2021-2025) includes the elaboration of practical guidance to address vulnerabilities throughout asylum and migration procedures, including reception conditions.”

Christophe Poirel, Director of Human Rights of the Council of Europe, noted that by joining forces with the UNHCR in organising this important event, the Council of Europe seeks to promote the ratification by its 47 member States of international and European Conventions relating to nationality and statelessness, and their successful implementation.

Lynn Al-khatib, a social activist who was invited to Strasbourg along with other stateless people to advocate for solutions, shed light on how it feels to live without a nationality. “The word stateless is associated with a lot of words ending in ‘less’. When you are stateless you feel worthless, futureless, faceless, helpless, hopeless, rootless, shoreless. You are on a rubber boat surrounded by water on a journey to nowhere. The only thing you have is your daydream of a shore that one day you might call home,” said Lynn Al-khatib in her blog, “A State of Less”.

Addressing statelessness requires collective efforts and a “whole-of society approach”. The event in Strasbourg, held as the world commemorate the sixtieth anniversary of the 1961 Convention on the Reduction of Statelessness, has fostered a fruitful exchange on building stronger partnerships to find solutions for the elimination of statelessness in Europe.

The international conference and expert meeting organized in Strasbourg on 23-24 September are part of global efforts in the framework of UNHCR's #IBelong Campaign (2014-2024) and the Council of Europe’s Action Plan on Protecting Vulnerable Persons in the Context of Migration and Asylum in Europe (2021-2025).

Launched in November 2014, the #IBelong Campaign aims to end statelessness within ten years, by identifying and protecting stateless people, resolving existing situations of statelessness and preventing the emergence of new cases. Through legal advocacy and awareness-raising, UNHCR works with governments and partners around the globe towards achieving the Campaign goals.

On 5 May 2021, the Committee of Ministers of the Council of Europe adopted the Action Plan on Protecting Vulnerable Persons in the Context of Migration and Asylum in Europe (2021-2025) to increase co-operation among member states to protect the most vulnerable persons.

Link to the event

Videos of the event:.