The Digital Development Unit of the Information Society Department organises a series of webinars on the impact of digitlal on human rights, democracy and the rule of law, in support of initiatives by Council of Europe sectors. These webinars are an opportunity for experts from different backgrounds to meet and discuss issues related to the digital transformation of society.

The AI&Law series, co-organised by the Council of Europe and the University of Strasbourg (UMR DRES), are regular meetings open to a wide public, public decision-makers, officials from international organisations and national administrations and academics, whose aim is to measure the stakes of subjects at the frontiers of digital techniques and the practice of law.

The Digital Development Unit of the Information Society Department is also recording a series of webinars (Digital Development Online Events) highlighting Council of Europe initiatives addressing challenges resulting from the digitalisation of people’s lives. These webinars are an opportunity for interested audiences from different fields of expertise to meet and discuss opportunities and risks emerging from the digital transformation of societies, and in particular the impact on human rights, democracy and the rule of law.

Three experts have discussed on the topic of predictive policing and rule of technology. Marine Kettani, policy officer at the Ministry of Justice (France), Christopher Markou, Leverhulme Fellow and Lecturer (United Kingdom), Antoinette Rouvroy, Senior Researcher at the University of Namur (Belgium), will analyse the current state of affairs in Europe and share their views on the consequences of the increasing use of algorithms in public policies. The webinar has been opened and closed by Rik Daems, president of the Parliamentary Assembly of the Council of Europe (PACE).

Three experts have been invited to discuss on the certification of algorithmic systems. Arisa Ema, PhD, Project Assistant Professor at the University of Tokyo (Japan), Nicolas Economou, Chief executive of H5 and chair of the Law Committee of the IEEE Global Initiative on Ethics of Autonomous and Intelligent Systems (United States) and Yaniv Benamou, PhD, Of Counsel Attorney, Lecturer at the University of Geneva (intellectual property, digital privacy and technology law) (Switzerland) shared their views on this modality of regulation.

The 8th edition, broadcasted on 10 December 2020 (14h30-16h30), addressed the profound impact of AI, and decision-making algorithms, on human rights. Human rights are presented as the basis of AI regulation work by most international organisations, due to the impact of this technology, both from an individual and collective point of view.

Discrimination, infringement of decision-making autonomy, infringement of privacy and freedom of expression are some of the risks commonly evoked and today taken into account in the work of most regulators. But other societal impacts are also to be considered: the progressive meshing of our lives by algorithms is not insignificant and a new model of society seems to be emerging.

The objective of this webinar was to explore this deeper impact resulting from the digital transformation that we live and examine how regulation could prevent harms and damages on individuals and the whole society. Excerpts from the documentary iHuman illustrated some of the challenges encountered.

This webinar focusses on the role artificial intelligence techniques such as facial recognition play in the criminal justice system. Deep learning techniques of this type promise to make it considerably easier to identify people from pictures and can be a real boon to police departments, provided the identification is technically reliable and fair – and the person in question was already a suspect before they were identified.

Currently a hot topic, video surveillance coupled with a facial recognition system is gaining traction in Europe while several North American cities have not only stopped using facial recognition, some have prohibited it. Does video surveillance create suspects? Is the fact that someone is present in a specific place – predetermined by the police – constitute reasonable grounds on which to launch a criminal investigation? Is using such combined surveillance and recognition systems a fair and effective way to fight crime?

Clear regulations have been adopted in recent decades to govern the use of investigative measures based on specific techniques such as telecommunications interception, using GPS to track vehicles, and installing surveillance cameras in homes. In Europe, the use of such techniques is reviewed by the European Court of Human Rights. Should similar rules apply when facial recognition is used to identify people?

Turning the mere identification of someone into grounds to investigate or proof of a crime is a legally delicate endeavor. Identification by a witness is governed by rules of criminal procedure. Witnesses must testify and be questioned by defense counsel before a judge, and in some cases their testimony cannot be admitted as evidence. Does AI testify? Does it provide an expert opinion? Can defense counsel question it, or impugn its reliability? Do otherwise benign observations produced by AI, such as that a driverless car was on the road, play a role in criminal proceedings?

This webinar is dedicated to the generalisation of deepfakes (or cheapfakes) and the automatic creation of textual content, such as GPT-3.

Surprising, playful, but also opening up the possibility of an industrialisation of disinformation, these technologies have largely been treated separately in the generalist media. Their combination is more rarely studied, and the possibility to create easily such content leads to risk of invasion of public space, including social networks.

Are these fears overestimated? What are the technical answers to filter such contents? What are the legal responses? This webinar will present practical and concrete examples of these technologies and will enable a panel of experts to discuss the important issues at stake, such as data protection, the fight against cybercrime and the fight against disinformation. 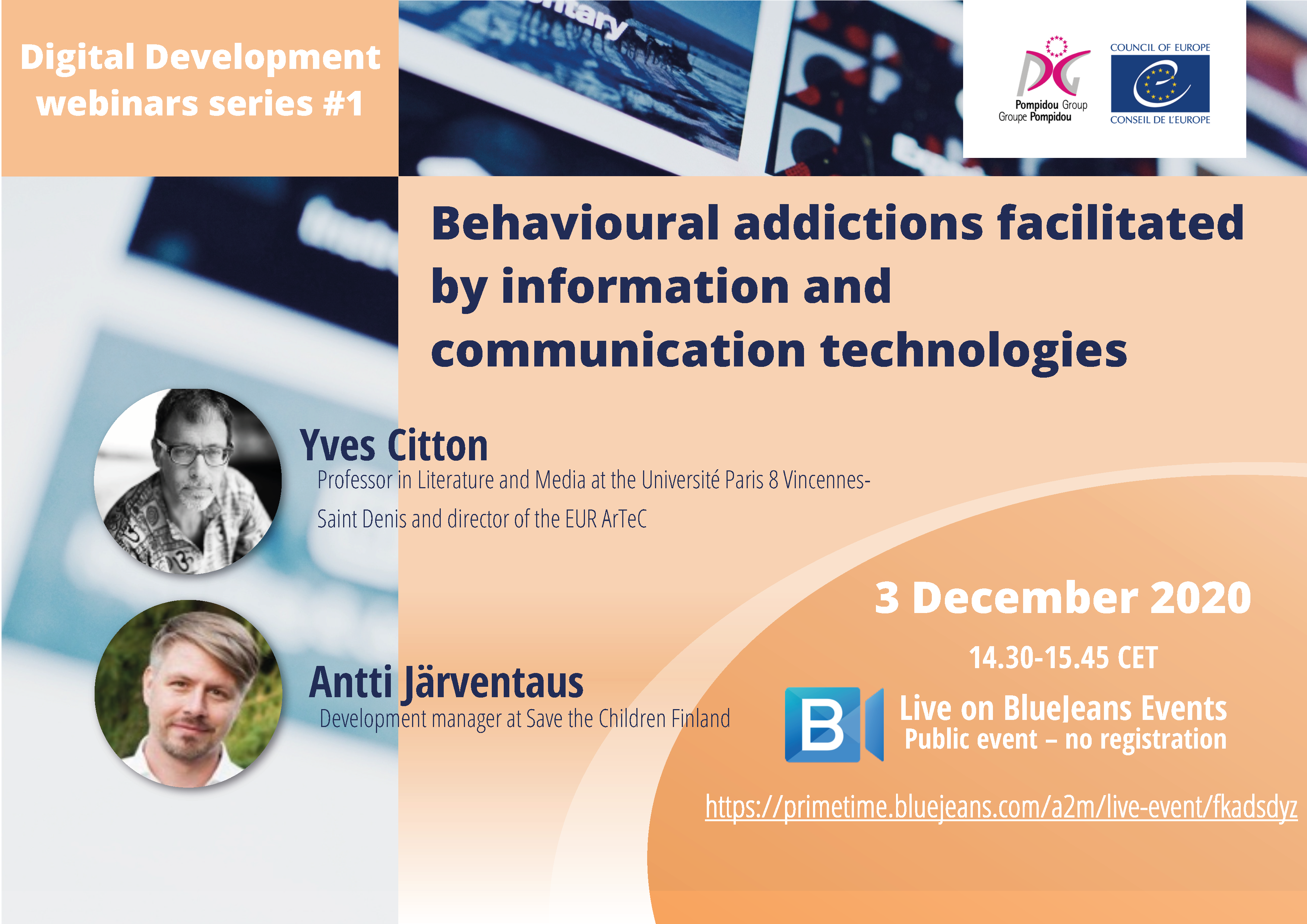 Over 5 billion humans use internet worldwide. Undoubtedly this technology is bringing about many advantages. At the same time concerns are growing about the potential detrimental effects resulting from excessive smartphone use. It is important to understand that the likely culprit for over-usage is not the smartphone but the excessive use of applications from the internet.

As the current business model of many applications is based on making available personal data in exchange for the right to use an app, it is not surprising that many programme design elements can be found in social media apps and free games that aim at prolonging the time users stay connected. Nearly all of the widely used apps and social media platforms contain these elements that seek to prolong usage time.

Growing research evidence shows that this can provoke compulsory app and social media use leading to behavioural addictions. It is therefore time to critically reflect on the effects of this business model ‘data in exchange for app-use’, as well as the applied technological and psychological mechanisms, on individuals and societies. The challenge will be not to limit smart phone use, but to regulate certain design elements in apps to come up with less addictive products. And above all, ideas for new currency to pay for using an app service need to be explored that can replace payment by attention. 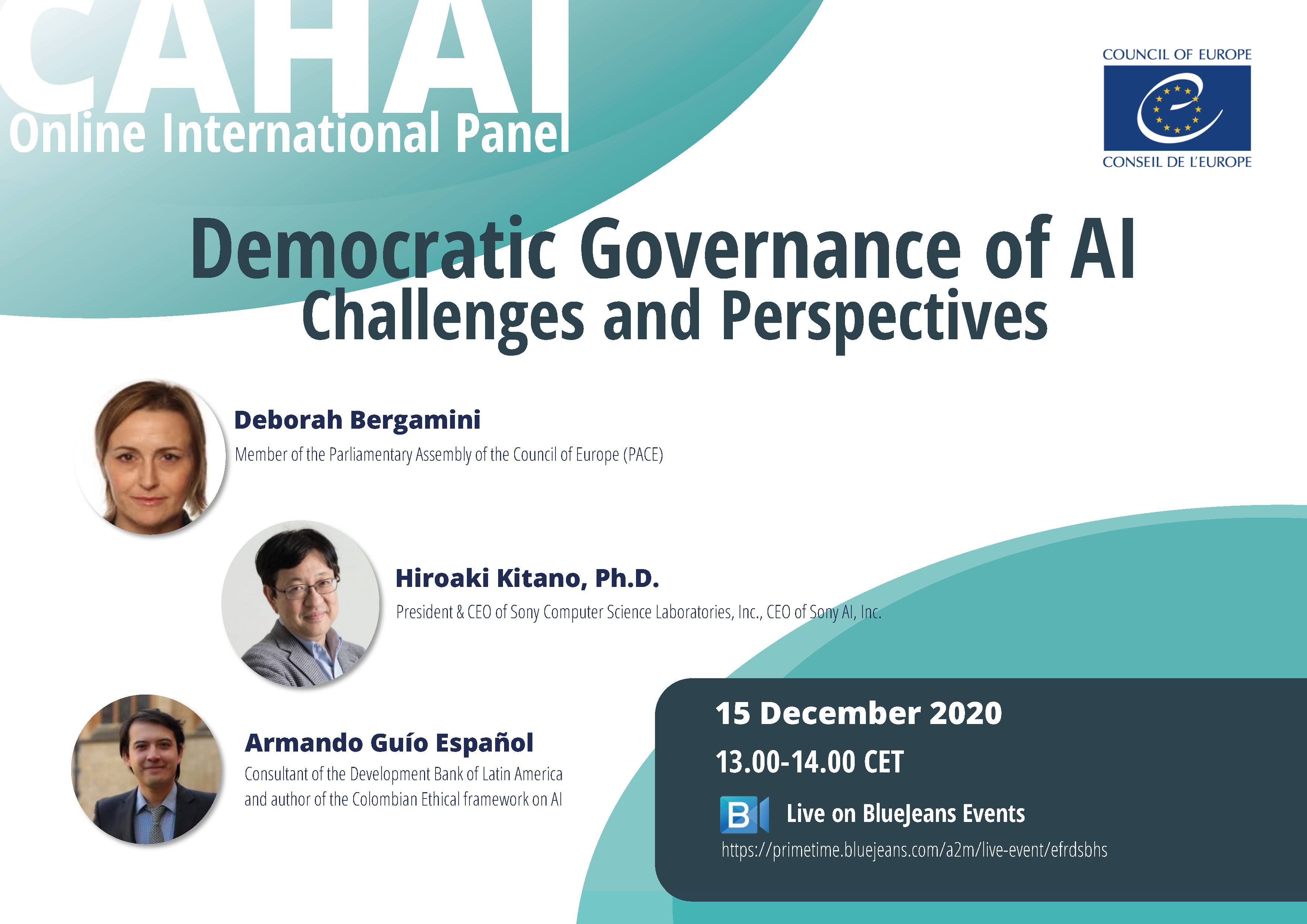 AI is in the centre of the fourth industrial revolution. This new disruptive technology is extremely pervasive, and it represents a challenge for the society as whole. Its huge impacts on human rights, democracy and rule of law required an urgent coordinated global action. While in Italy public debate and awareness need to be implemented at societal level, Japan presents a strategy based on the principle of human-centric AI.  Three are the pillars on which the latter strategy is designed: dignity, diversity and inclusion and sustainability to create society 5.0. In a democratic society the hope is to have a beneficial AI.

This webinar has been organised with the support of Japan. 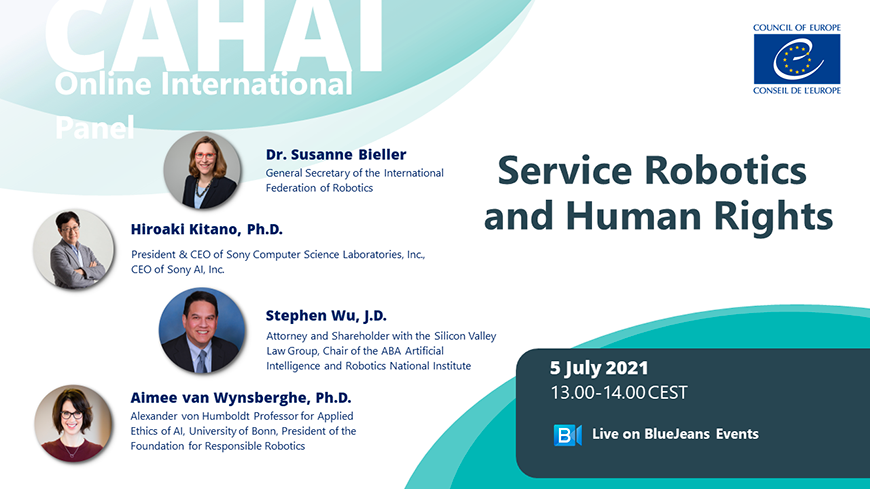 The digitalisation of our lives brings challenges and opportunities. One of the aspects of such digitalisation is the use of artificial intelligence systems, and in particular – intelligent service robots, which sometimes augment or replace us in interactions with other humans.

In certain contexts, the use of such robots may pose questions which are relevant from the human rights' perspective. When can their use foster or hamper human dignity and the right to privacy? How can their use affect other fundamental rights?

Renowned experts were invited by the Council of Europe to discuss the interplay between human rights and the use of service robots in the webinar format.

The event took place on 5 July 2021 on the sidelines of the 5th plenary meeting of the Council’s Ad-hoc Committee on Artificial Intelligence (CAHAI), which is currently examining the feasibility and potential elements of a legal framework for the development, design and application of artificial intelligence systems.