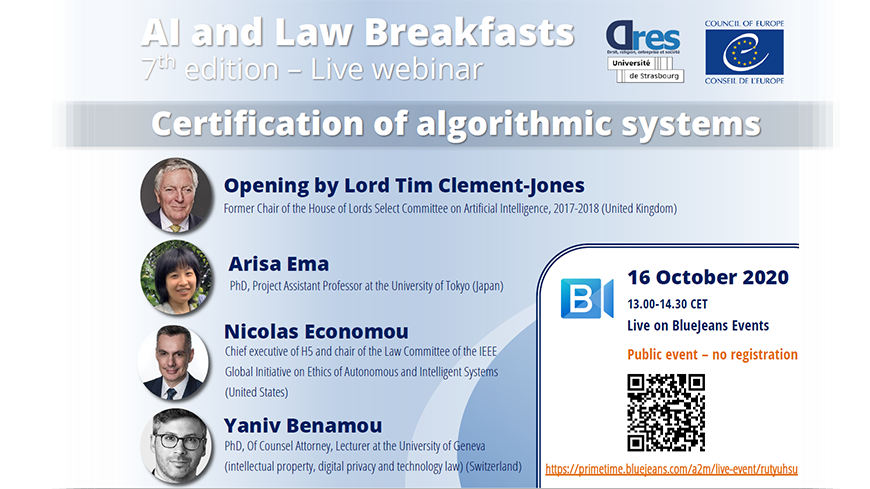 The AI and Law breakfasts, co-organised by the Council of Europe and the University of Strasbourg (UMR DRES), are regular meetings open to a wide public, public decision-makers, officials from international organisations and national administrations and academics, whose aim is to measure the stakes of subjects at the frontiers of digital techniques and the practice of law.

The 7th edition deatl with the certification of algorithmic systems, including those relating to the latest developments in artificial intelligence (AI). At a time when public opinion is very concerned about the concrete consequences of some AI applications, such as discrimination or the weakening of human agency, regulators are looking for concrete solutions to create trust among users.

Like other industries, such as pharmaceuticals, the idea of guaranteeing, through the intervention of an independent third party, the conformity of an algorithmic system with a certain number of rules, including human rights principles, has therefore been raised in academic and institutional literature.

The purpose of the webinar on the certification of algorithmic systems will be to explore in a practical way the opportunities, but also the practical issues of such a proposal.

Arisa Ema, PhD, Project Assistant Professor at the University of Tokyo (Japan), Nicolas Economou, Chief executive of H5 and chair of the Law Committee of the IEEE Global Initiative on Ethics of Autonomous and Intelligent Systems (United States) and Yaniv Benamou, PhD, Of Counsel Attorney, Lecturer at the University of Geneva (intellectual property, digital privacy and technology law) (Switzerland) shared their views on this modality of regulation.