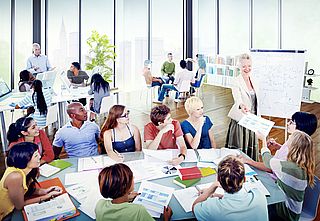 At the end of the 60s, first under the influence of the rapid technical progress, and fairly soon under the impact of social and economic changes, it became obvious that the development and training of individuals could no longer be based on a strict divide in human beings life between a learning period and an adult life period drawing on previously acquired knowledge, which was the pattern until the middle of the 20th century.

The pace of changes and transformations in all fields, that started in the 60s and 70s and only quickened sinced then, rendered the traditional model totally obsolete. It became clear that everyone needed to integrate learning, the development of competences and the ability to constantly learn in all aspects of their lives, be it private, social, professional and economic, or cultural.

Also, training structures multiplied, linked to professional development, associations, or based on ITCs. They largely contributed to the educational role of structures or mechanisms that are outside the formal education system.

The notions of curricula, subject or knowlege, the relationship to learning and the need to acquire and master general learning skills ("learning to learn") added to the criticism traditional structures of educational systems faced and undermined their practice, traditions and ways of doing things.