Education organisations and institutions need permission to issue certificates, diplomas and qualifications. Accreditation is the process they have to go through to get it. For example, universities need accreditation to issue degrees, and they usually get this from the national educational authorities, who vouch for the credibility of the degrees they issue.

The process of evaluating or estimating the nature, ability, or quality of something.[i] In formal education, assessments are done using exams to judge performance and achievement, and usually result in a ranking of those who did best and worst according to a pre-defined standard. Assessment also takes place in non-formal education, but group experiences and processes are more important than individual achievement; non-formal education also uses different methods to conduct the assessment. Participatory processes of evaluation and debriefing are preferred to testing and ranking. Self-assessment is a process of evaluating yourself according to a given standard or set of criteria. In the case of the Portfolio, the Portfolio competence framework provides the standard against which the self-evaluation takes place, as well as a guide for how to do it and how to document its results.

The formal process of validating knowledge, know-how, skills and/or competencies. Certificates are the ‘pieces of paper’, which record the outcomes of getting certified. They usually have the status of official documents and are a very common way of communicating academic or professional achievements.

The ability to do something successfully or efficiently. The term is often confused with the term ‘skill’. Two things make a competence different from skill, and make a competence more than a skill. When you are competent, you can apply what you know to a task or challenge and you are able to transfer this ability between different situations. In non-formal education, competence is understood as having three interlinked dimensions: knowing, knowing how to do, and knowing how to be. These are often symbolised by the head, hands and heart.

The ability to understand and share the feelings of another.[i] Empathy has also been described as the ability to “put oneself in someone else’s shoes”

Making a reasoned judgement about something. The term evaluation does not say anything about the judging being done: not about the purpose, or the method or whether the result is good or bad. It only refers to the process.

Proof of something. In the context of the Portfolio assessment you are asked to provide evidence of your competence. This evidence refers to anything you think backs up the claims you make about your competence. These could be testimonies from your former participants, reference letters or recommendations from your employer or volunteer manager, certificates from courses and/or examinations you may have taken, proof that you participated in or tried to access on-the-job or other training, or anything else you think demonstrates the extent to which you assess yourself as competent. Evidence can take different forms too – video, audio recordings, photos, blogs, and so on. Getting input from the young people you work with or asking someone you know and trust, and who knows you in your youth-work context, to review your self-assessment are also good ways of gaining evidence to back up your competence assessment.

Intercultural competence is a combination of attitudes, knowledge, understanding and skills applied through action which enables one, either singly or together with others, to:

While the definition of intercultural competence provided above states that such competence involves respecting people who are perceived to have different cultural affiliations from oneself, it is important to distinguish between respect for people and respect for actions. Human beings and their inalienable human rights, and the dignity and equality of all people, should always be respected, but there are limits on the respect which should be accorded to actions: respect should be withheld from actions which violate the fundamental principles of human rights, democracy and the rule of law. Actions which violate these principles should not be condoned on the grounds of ‘cultural difference’.[i]

What someone individually knows or the sum of what a given group collectively knows. In education, knowledge is what there is to learn, but this does not mean that it is good or useful. It has to be joined up with skills (to become useful) and with principles and values (to become worthwhile).

The ‘ongoing, voluntary, and self-motivated’[i] pursuit of knowledge for personal or professional reasons. The idea of Life-Long Learning recognises that learning is not confined to childhood or the classroom but takes place throughout life and in a range of situations. During the last fifty years, constant scientific and technological change has shown that learning takes place constantly through daily interactions with others with the world around us[ii]. Research shows that Life-Long Learning can improve personal development, active citizenship and social inclusion.[iii]

An official record or document testifying to the fact that a person has successfully completed a given course or reached a given standard of achievement for a field, skill or competence. It is often used as a synonym for a certificate or diploma.

Preconceived opinion that is not based on reason or actual experience.[i]  Prejudice is most often negative, and prejudices are rarely borne out by facts or evidence.

A formal and often legal way of showing that participation in learning and its outcomes are worth something or valuable. Certification is a form of formal recognition. There are also less formal forms of recognition, known as social recognition. This means that the wider community of practice considers something valuable even though it may not have official documents to ‘prove’ its worth.

The combination of knowledge and experience needed to perform a specific task or job. ‘Skilled’ refers to someone who has learned what to do and how to do it, and can show this.

Unity or agreement of feeling or action, especially among individuals with a common interest; support for others experiencing some difficulty or challenge with which one or one’s group / community can identify; mutual support within a group.[i]

a widely-held but fixed and oversimplified image or idea of a particular type of person or thing.[i] Stereotypes can be positive or negative. Usually, there is some “truth” underlying stereotypes.

The ability to tolerate different interests, expectations, and needs, and to make allowances for them in the process of establishing understanding between people or in other new situations or situations of uncertainty.[i]

[i] Adapted from: Otten, H., Ten Theses on the correlation between European youth encounters, intercultural learning and demands on full and part-time staff in these encounters, IKAB, 1997: http://www.ikab.de/reports/Otten_thesen_en_1997.pdf

As with recognition, this refers to a process for establishing the formal and/or informal worth or value of something. In the educational field it refers to the recognition of learning progress and outcomes as valid and valuable. 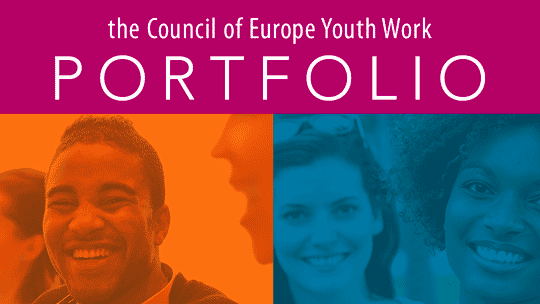 The Council of Europe Youth Work Portfolio is a tool to help those doing youth work, primarily youth workers and youth leaders, but also managers and administrators, to assess and further develop their youth work competence and that of the people under their supervision.