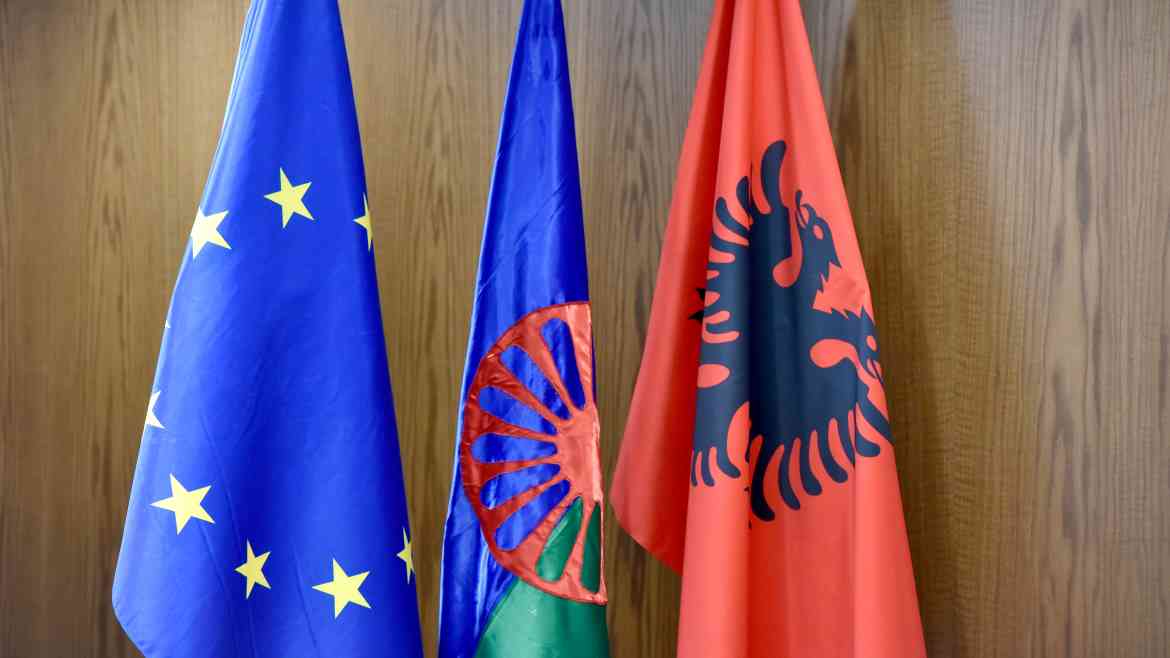 On 05 November, World Day of Romani Language, the mayors of ten partner Albanian municipalities of the joint European Union and Council of Europe ROMACTED regional programme signed a Tripartite Memoranda of Understanding with the Minister of Health and Social Protection Ogerta Manastirliu and the Head of the Council of Europe Office in Tirana, Jutta Gützkow. The MoU provides a framework of cooperation for the implementation of the programme in the municipalities of Elbasan, Pogradec, Korça, Fier, Roskovec, Vlora, Përmet, Gjirokastra, Lushnje and Cërrik.

In her address, Minister Manastirliu commended the work carried out under the phase I of the ROMACTED Programme by beneficiary local authorities in close cooperation with Roma facilitators underlining the serious efforts in designing the Local Action Plans for the Integration of Roma and Egyptian Minorities and the valuable support of the ROMACTED Programme in building the Guidelines for Roma and Egyptian Responsive Budgeting at Local Level in Albania. “Your presence today demonstrates the work accomplished in regard to the joint efforts for integration of Roma and equal access to services, inclusion in the labour market, adequate housing, education and health care” Manastirliu said.

Ambassador Soreca highlighted “Today is a special day, World Day of Romani Language, an international effort to promote the preservation of Romani language and culture, recognize the importance of the language and improve the wellbeing of Romani people. Romani language is an integral part of the heritage in Albania and celebrating this day today is a call for diversity, multiculturalism and tolerance among different groups. “This programme is very important for us, as it combines two priorities for the EU in Albania, local governance and Roma inclusion”, Soreca added.

A second event took place at “leksander Xhuvani” University in Elbasan focused on “Romani Language – Historical legacy in the lbanian heritage”. Students, teachers, scholars and representative of local authorities discussed on the efforts undertaken in Albania to protect and preserve the Romani language, including ways on how to further sustain it in the younger generations in close cooperation with educational institutions.

In this view, the CoE Head of Office, Jutta Gützkow, underlined the special role that “Aleksander Xhuvani” University plays in education efforts, being the only university in Albania which offers a bachelor programme on Albanian and Romani language studies, thus sustaining the academic capacities to keep the Romani language and culture alive. She also commended the endorsement by the Albanian authorities of the CoE Recommendation CM/Rec (2020)2 on the inclusion of Roma and/or Travellers’ history in school curricula and teaching materials under the National Strategy of Education 2021-2026 and the National Action Plan on Equality, Inclusion and Participation of Roma and Egyptians in the Republic of Albania (2021-2025).

Romani Language is spoken in about 50 countries and dating back 1000 years ago since the migratory waves from North India to Europe and other continents.

The European Union/Council of Europe ROMACTED Programme phase 2 (2021 to 2024), follows on the footprints of the first phase aiming to consolidate the integration of Roma and Egyptian local communities through enhanced participation in local policymaking and implementation of local actions. It is implemented by the Council of Europe’s Roma and Travellers Team and the Office of the Directorate General of Programmes in seven beneficiaries in Western Balkans and Turkey.