From the Parliament of Albania, we say “No to Discrimination” 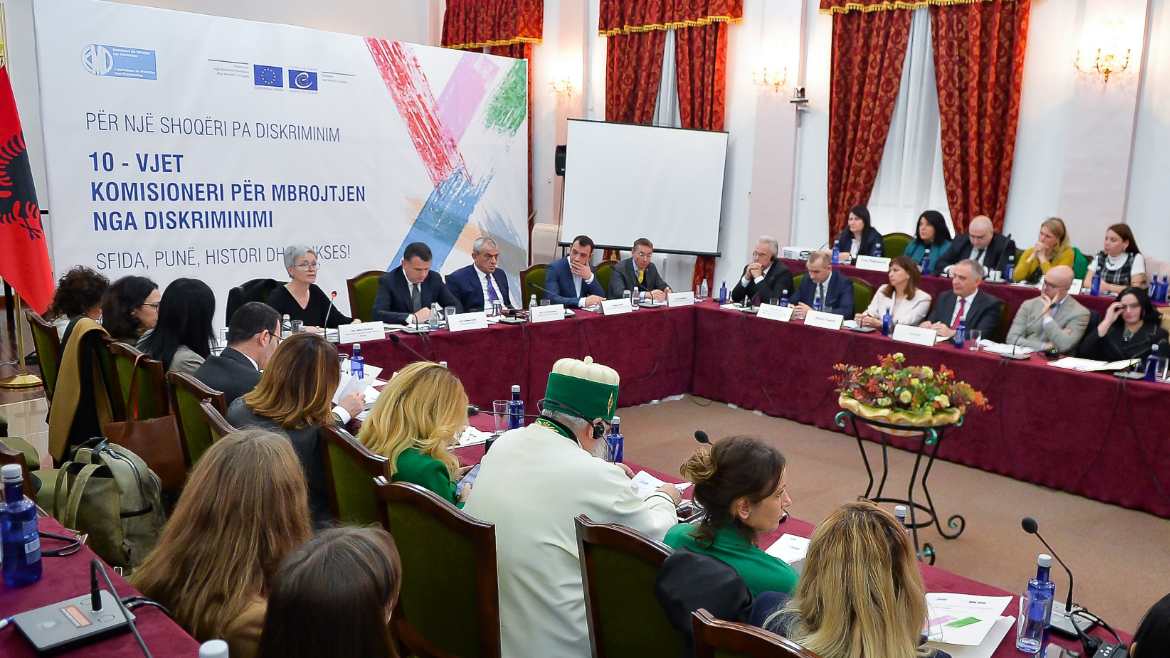 The Parliament of Albania welcomed the closing of the “Anti-Discrimination Week” in a public event that gathered members of the parliament, representatives of international organisations and civil society, human rights activists etc. to talk about the efforts and the progress in the last decade in achieving equal rights and freedoms for the citizens of Albania. 10 years ago in this building, the Albanian lawmakers voted and adopted the landmark “Law on Protection from Discrimination” which regulates the application of the principle of equality and established the Commissioner for the Protection of Discrimination to ensure more equal rights for vulnerable groups and fighting discrimination in the public and private domain.

The Head of the Council of Europe Office in Tirana, Ms Jutta Gützkow, shared with the participants the importance and the role of the Council of Europe in supporting key reforms in the country that guarantee and advance human rights protection based on the European standards. "You may wonder why the Council of Europe gives so much importance to the fight against discrimination? I should like to say because we cannot do otherwise! The European Convention on Human Rights obliges us to do so, specifically Article 14, which clearly defines that the enjoyment of the rights and freedoms shall be secured without discrimination on any ground such as sex, race, colour, language, religion, political or other opinions, national or social origin, association with a national minority”, stressed Gützkow.

The speaker of the Parliament, Mr Gramoz Ruçi, welcomed this initiative focusing on the importance of advancing equal rights not only in the legal framework but also in the society: “Discrimination must be fought at its roots, starting from the education and cultural aspects, to employment and especially working with youth…” stressed Ruçi.

The Commissioner for Protection from Discrimination, Mr Robert Gajda, described the efforts, progress made and also the challenges to achieving better protection in human rights in the past 10 years since the adoption of the Law, especially for vulnerable groups. “what we really intend to do is not limited at discussing successful examples of combating discrimination, but also make institutions understanding the standards and apply them in their daily work and practice’, said Gajda.

Mr Taulant Balla, Chairman of Socialist Party Parliamentarian Group, tackled the importance of having good laws and strong institutions in guaranteeing the respect of fundamental rights and freedoms in Albania focusing on the important results and achievements that the law brought in fighting discrimination in all the spheres.

The “Week Against Discrimination'', an initiative of the Commissioner for Protection from Discrimination in Albania, supported by the European Union and the Council of Europe programme ‘’ROMACTED: Promoting good governance and Roma empowerment at local level’’ and the European Union and Council of Europe joint programme ‘’Horizontal Facility for the Western Balkans and Turkey’’ - Action on ‘’Promotion of Diversity and Equality in Albania”, was conducted through a series of events in all Albania to promote the principles of equality, non-discrimination and good governance, involving all relevant stakeholders, partners and related actors in the field of combatting hate speech, anti-discrimination as well as Roma empowerment.