The Russian Federation can no longer be a member State of the Council of Europe, PACE says 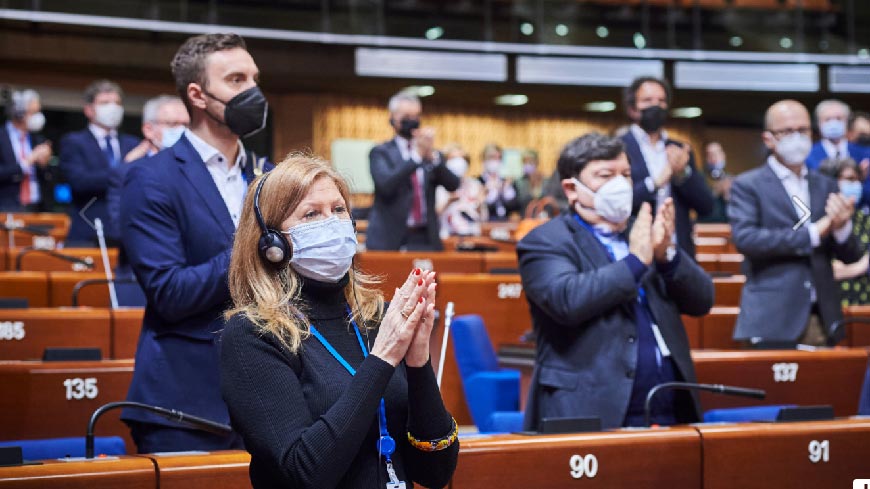 The text, based on the report prepared by Ingjerd Schou (Norway, EPP/CD) and adopted unanimously at the end of an extraordinary plenary session, expresses solidarity with Ukraine, the Ukrainian people and PACE’s Ukrainian members, reaffirming “unwavering support for the sovereignty, independence and territorial integrity of Ukraine within its internationally recognised borders”.

The Assembly is deeply disturbed by evidence of serious violations of human rights and international humanitarian law by the Russian Federation, including attacks against civilian targets and humanitarian corridors, “indiscriminate use of artillery, missiles, and bombing” as well as hostage taking. It notes with shock the “reckless attacks” by Russian armed forces on nuclear facilities in Ukraine. Accordingly, it supports “all efforts aimed at ensuring accountability”.

The parliamentarians applauded the generosity and solidarity shown by neighbouring countries, who continue to take in hundreds of thousands of refugees, most of them women and children, while in the Russian Federation anti-war protests are harshly repressed, freedom of expression and assembly curtailed, and almost all independent news organisations closed. In the event that the Russian Federation ceases to be a member of the Organisation, the Council of Europe should, according to PACE, envisage initiatives to be able to continue “to support and engage with human rights defenders, democratic forces, free media and independent civil society”.

In view of the participation of Belarus in the aggression, PACE Bureau should “suspend relations” between the Assembly and the country’s authorities in all its activities. At the end of the seating, PACE President Tiny Kox stated: “we are sad that today we had to ask to expel a State which has been a member of our Organisation for over 25 years, but I’m glad that we dared to do it. There is no place in this Organisation for those who cross red lines.”