Support for “Strasbourg Principles” in inter-religious dialogue on religion and peace, religion and human rights

italiano
Presidency of the Committee of Ministers Strasbourg 2 May 2022 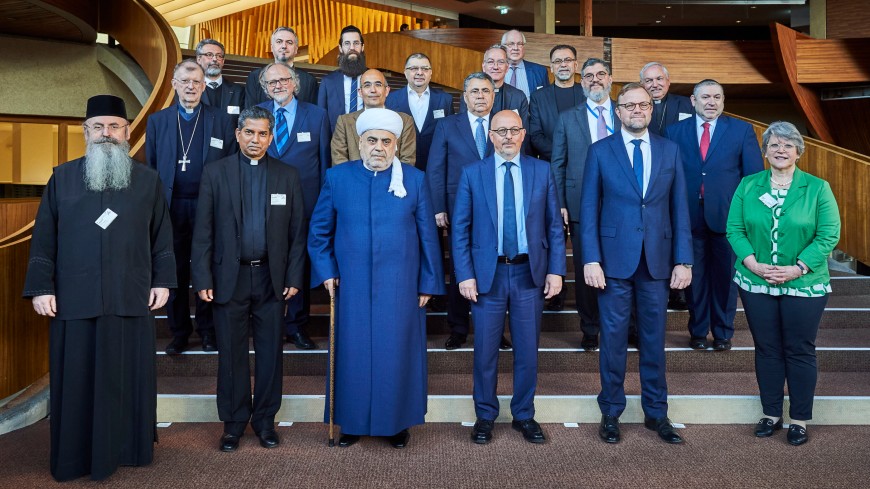 An international conference took place today within the framework of the Italian Presidency of the Committee of Ministers on the subject of “Inter-religious dialogue on religion and peace, religion and human rights”.

The aim of the event was to relaunch within the Council of Europe a dialogue amongst leaders of traditional religious faiths, in order to foster mutual respect, peace and greater awareness of diversity in European societies. It was opened by Ambassador Michele Giacomelli, Chair of the Committee of Ministers’ Deputies and by Deputy Secretary General Bjørn Berge, and the key-note address was delivered by Heiner Bielefeldt, Professor at University of Erlangen and former United Nations Special Rapporteur on Freedom of Religion or Belief.

Religious high-level leaders from groups that have a strong historical and traditional presence in Europe, such as the Catholic, Protestant and reformed, Orthodox, Jewish and Muslim communities took the floor in a discussion on religion and peace, religion and human rights, leading to the support of the “Strasbourg principles for Inter-religious dialogue”.

The “Strasbourg Principles”, a set of fundamental principles for Inter-religious dialogue, will form the basis for future work of the Organisation in this area.

An intervention was made by Azza Karam, Secretary General of Religions for Peace, and Ambassador Jean-Christophe Peaucelle, Advisor for Religious Affairs with the French Ministry of Foreign Affairs, also attended the conference.

Concluding remarks were provided by Dr. Fabio Petito, Director of FoRB & Foreign Policy Initiative (University of Sussex), on behalf of the Italian Presidency.

Background
The Council of Europe has recognised the Inter-religious dimension as an important part of intercultural dialogue and encouraged religious communities to actively engage in promoting human rights, democracy and the rule of law in a diverse and multicultural Europe.

Since 2000, the Organisation has also been actively involved in facilitating Inter-religious dialogue, first through a series of seminars organised by the Commissioner for Human Rights (2000-2006), then through the annual Exchanges on the religious dimension of intercultural dialogue initiated by the Committee of Ministers (2008-2017).

In 2015, the Steering Committee for Human Rights (CDDH) elaborated a comprehensive compilation of the most relevant standards relating to the principles of freedom of thought, conscience and religion, as well as the links to other human rights protected by the European Convention of Human Rights.