Secretary General to PACE: any attempt to divert attention from the corruption report is intolerable 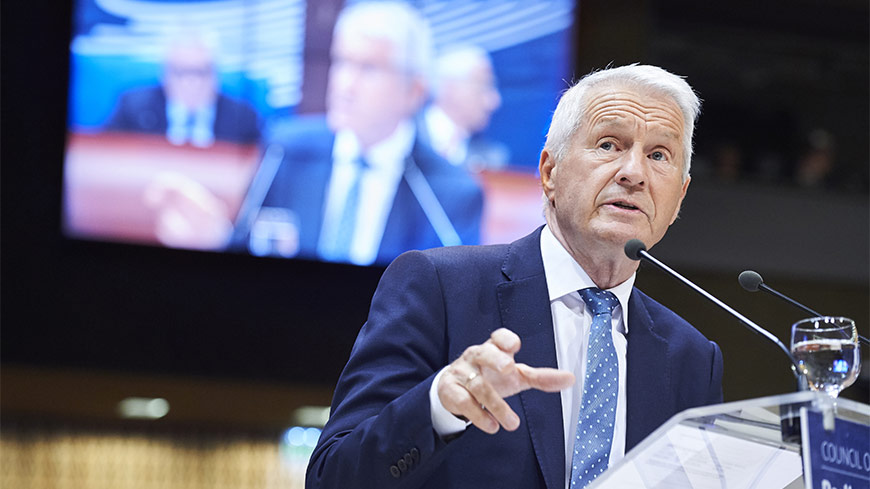 Answering questions from members of the Parliamentary Assembly, Secretary General Thorbjørn Jagland said he was very sad that at a time when he and the Committee of Ministers were struggling to gain the release of a prisoner in Azerbaijan, in line with a judgment delivered by the European Court of Human Rights, their work was undermined by leaders from three political groups in PACE. In a further reference to the report into corruption allegations in PACE, Mr Jagland declared that any attempt to divert attention from the report was intolerable.

In response to several questions on the Russian Federation, Mr Jagland said that although he had, in common with many other leaders, congratulated President Putin on his election victory, he did not accept that voting should have taken place in Crimea, which had been illegally annexed by Russia.

Referring to Russia’s non-payment of its budget contributions, Mr Jagland pledged that if this unacceptable behaviour continued for a period of two years, due in mid-2019, he would take the necessary action before he finished his mandate, which expires shortly afterwards. He also underlined his opposition to the challenge posed to the authority of the European Court of Human Rights by the Russian Constitutional Court. If any member state used its constitution against the supremacy of the ECHR said Mr Jagland, then its membership was over.

Mr Jagland emphasised that continued recourse to the ECHR by Russian citizens made it essential to find a solution to the PACE dispute, but such a solution could not be based on financial pressure, as represented by Russia’s withholding of its membership dues.

In answer to questions concerning the organisation’s activities, Mr Jagland outlined achievements such as the reduced number of applications to the ECHR, the ambitious action plans in Ukraine, Georgia and Moldova, and the mobilisation of extra-budgetary resources on an unprecedented scale. Such progress should, he said, encourage the continuation of the reform process.