Péter Szijjártó reviews the priorities of the Hungarian Presidency 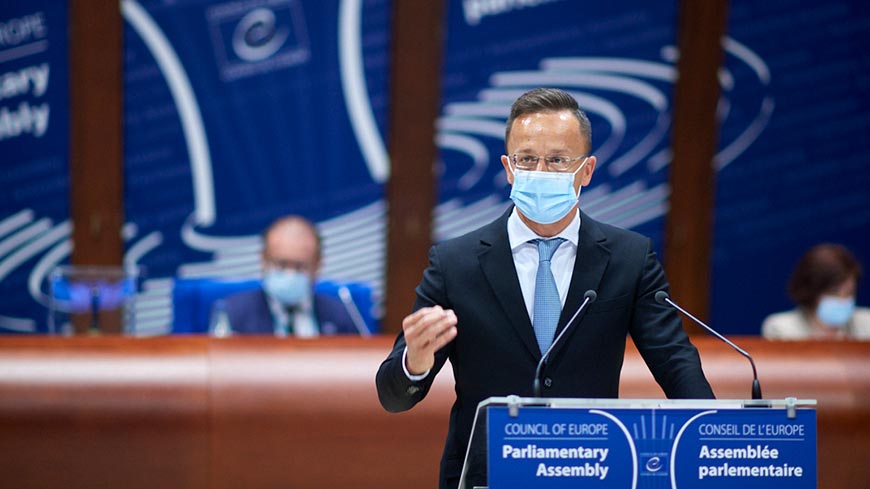 “Guarantees should be given to national minorities to enable them to preserve their identity, culture, religion and language in public administration, education and in the media,” said Péter Szijjártó, Hungarian Minister for Foreign Affairs and Trade and Chair of the Committee of Ministers of the Council of Europe, addressing PACE on 21 June. “We are going to host four conferences during our Presidency with a view to promoting the rights of national minorities,” he announced.

Other priorities of the Hungarian Presidency mentioned by Mr Szijjártó include the protection of families, especially children, under the totally new circumstances caused by the pandemic. “Because of the pandemic, individuals’ lives have been transformed from real to virtual, through digital education, or teleworking. This phenomenon has created a large number of inexperienced users in the virtual world, who are defenceless against cybercrime and those who commit sexual crime. Families and children must be protected, both in real life and in virtual life, and we need regulations to penalise these crimes,” he said.

In this context, he recalled that, at the 131st Session of the Committee of Ministers, held by videoconference from Hamburg on 21 May, the Ministers called for an acceleration of the work to prepare a Second Additional Protocol to the Budapest Convention on Cybercrime, to enhance the efficiency of co-operation between member States on cybercrime and electronic evidence.

The Hungarian Presidency will also put special emphasis on the protection of the rights of all individuals to practice their religion, the fight against persecution of Christians and against antisemitism, and protection of the environment. “We do believe that improving competitiveness and protecting nature can and must go hand in hand,” he said, stressing that Hungary was the first country to sign up and ratify the Paris Agreement. “An important goal of our Presidency is to promote international co-operation and mutual assistance to ensure the fundamental right to a healthy environment,” Mr Szijjártó concluded.