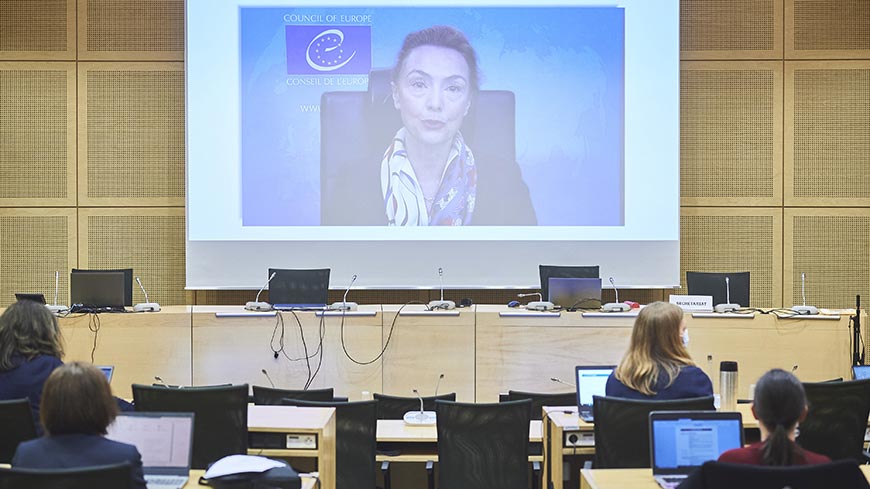 In a speech to mark the 10th anniversary of the Council of Europe Convention on preventing and combating violence against women and domestic violence, better known as the Istanbul Convention, Secretary General Marija Pejčinović Burić outlined the success of the treaty over the past decade, urging member states to increase their support for it.

Addressing an online conference today co-organized with the German Federal Ministry for Family Affairs, Senior Citizens, Women and Youth, in the framework of Germany’s current Presidency of the Committee of Ministers, she stressed that “today, in Europe, there are women who are still alive because of the Istanbul Convention” and that “the treaty has been described as a ‘gold standard’ and where it has been adopted, it has worked.”

In response to Turkey’s announced exit from the treaty, she explained that "the Istanbul Convention's standards for the protection of women are more stringent than the laws of many countries" and that "the convention provides an independent and unparalleled international monitoring mechanism to assess its implementation at the national level and assist in its application."

The morning session of the conference reaffirmed the political will of states parties to fully implement the Convention, and to highlight the positive impact that it has had over the past decade.

An afternoon panel discussed the implementation of the Council of Europe Recommendation on preventing and combating sexism and the related Council of Europe Campaign “Sexism: See it. Name it. Stop it!”, highlighting relevant initiatives of decision makers and civil society at the national and regional level to address sexism.

In this interview with Deutsche Welle, Marceline NAUDI, President of the Istanbul Convention monitoring group (GREVIO) outlines positives of the treaty over the last 10 years, but regrets Turkey’s exit from the treaty as a setback for human rights.