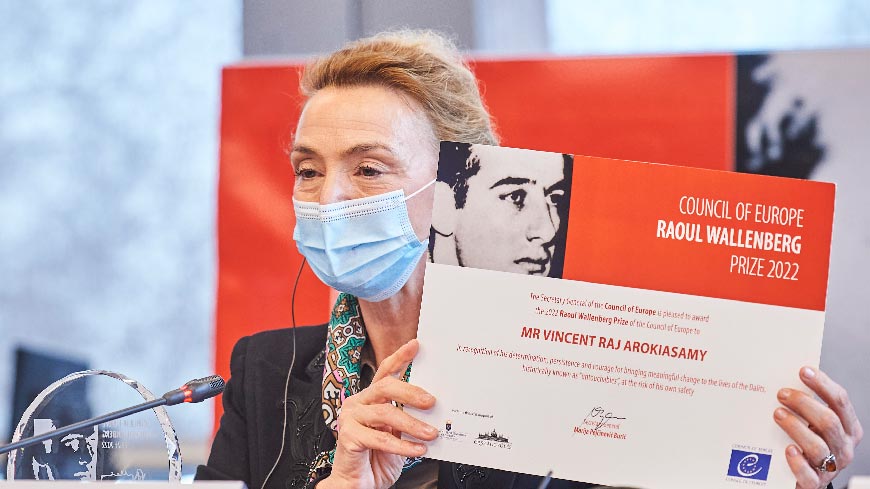 Vincent Raj Arokiasamy, founder of the organisation “Evidence” in India, has been awarded the Council of Europe’s Raoul Wallenberg Prize for his outstanding determination and persistence in bringing meaningful change to the lives of the Dalits, historically known as “untouchables”.

“Vincent Raj Arokiasamy has risked his life to help an exceptionally disadvantaged part of the Indian population whose plight is often ignored by national and international communities. In defending human rights with incredible commitment and resilience, his courageous actions for the so-called “untouchables” fully reflect the spirit and values of the Raoul Wallenberg prize”, said Marija Pejčinović Burić, the Secretary General of the Council of Europe.

Vincent Raj Arokiasamy has demonstrated enormous courage and taken grave risks regarding his own and his family’s lives. He has rescued some 25,000 victims in 3,000 incidents of human rights violations. As a result, he has to live apart from his family to protect them. He has devoted his life to the cause of promoting justice for Dalits and others whose voices are rarely heard.

The award ceremony took place on Wednesday 19 January in a hybrid format. Speakers at the event included the Secretary General, the Chair of the Jury and the Laureate. A screening of József Sipos’s documentary on the life of Raoul Wallenberg “The Lost European” followed the ceremony. The documentary can be streamed online, free of charge, until 23 January. The film streaming is made available with the support of the Permanent Representation of Hungary to the Council of Europe.

17 January marks the anniversary of Raoul Wallenberg’s arrest in Budapest in 1945. The Swedish diplomat used his status to save tens of thousands of Jews from the Holocaust. His actions show that one person's courage and ability can really make a difference. Established in 2012, at the initiative of the Swedish Government and the Hungarian Parliament, the Council of Europe has created the Raoul Wallenberg Prize to keep the memory of his achievements alive. The Prize, worth €10,000, is awarded every two years in recognition of extraordinary humanitarian achievements by a single individual, a group of individuals or an organisation.