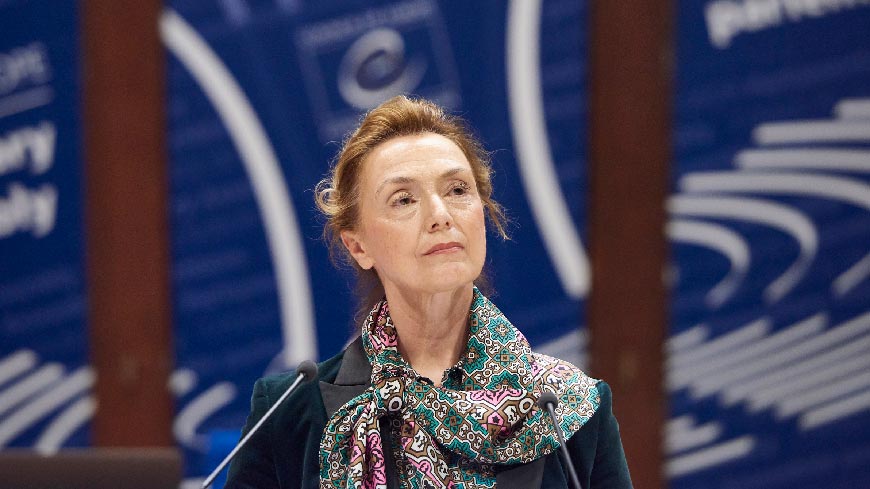 Responding to questions from members of the Parliamentary Assembly (PACE), Council of Europe Secretary General Marija Pejčinović Burić confirmed that the organisation had proposed adjustments to the Ukraine Action Plan to address the immediate consequences of the Russian aggression. “We must do everything we can to support the country” said the Secretary General, who also expressed her solidarity with the Ukrainian people and saluted their courage.

She said she is ready to travel to Kiev to discuss the country’s short and long-term needs as soon as she received an official invitation. She also underlined the measures already taken by the organisation, including moving the staff of the Council of Europe’s Kiev office who so wished to safety in neighbouring countries, and working with Ukraine’s Prosecutor General to advise her on gross human rights violations. Moreover, she welcomed the Council of Europe Development Bank’s allocation of €5 million in grants for the Migrant and Refugee Fund.

In answer to a question on the Republic of Moldova, the Secretary General said she was worried about the security situation in the country’s Transnistria region, and called on all countries to respect Moldova’s neutral status, sovereignty and territorial integrity. She said the Council of Europe would continue supporting the country in dealing with the huge influx of refugees from Ukraine.

Responding to a question on the sentencing to life imprisonment by a Turkish court of Osman Kavala, the Secretary General said she was very disappointed and remarked that this was yet another missed opportunity for courts in Turkey to comply with the judgement of the European Court of Human Rights that required Mr Kavala’s immediate release from custody.

Finally, the Secretary General strongly condemned death threats made against the former PACE rapporteur Dick Marty, in relation to his report on alleged organ trafficking in Kosovo*.

* All reference to Kosovo, whether the territory, institutions or population, in this text shall be understood in full compliance with United Nations Security Council Resolution 1244 and without prejudice to the status of Kosovo.

Special page on war in Ukraine