Council of Europe and UEFA sign Memorandum of Understanding

русский
Council of Europe Strasbourg 30 May 2018 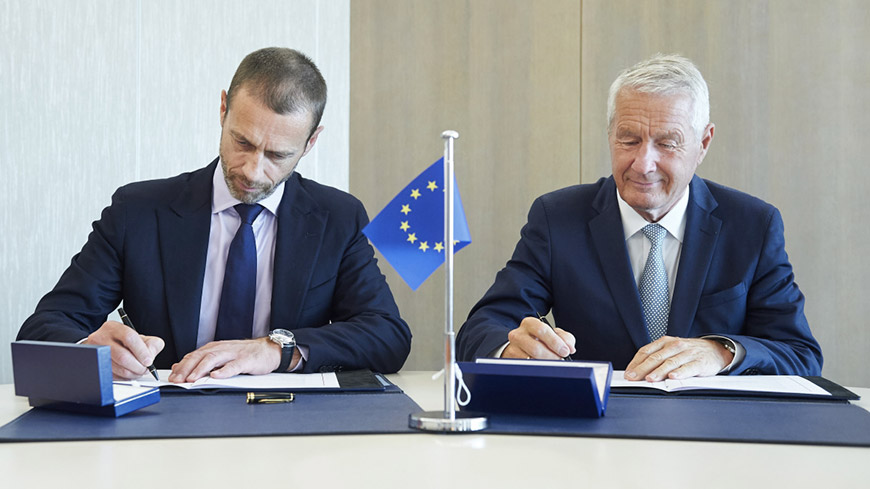 Council of Europe Secretary General Thorbjørn Jagland and UEFA President Aleksander Čeferin have signed today at Palais de l’Europe a Memorandum of Understanding to strengthen their co-operation and implement common strategies in areas of shared interest. This landmark agreement focuses on four main areas of co-operation: human rights, integrity and governance in sport, safety and security at football matches, mutual co-operation in preparation of major football events, and institutional co-operation by means of regular dialogue, joint initiatives, exchanges of good-practice and targeted projects.

During the ceremony of the signature of the Memorandum of Understanding, Thorbjørn Jagland stated: “Sports is of enormous benefit to society and we should maximize its positive potential. Our partnership will help us promote human rights and good governance in sport on the basis of shared common European values of diversity and solidarity.”

“We are pleased to enter into a formal and strategic partnership with the Council of Europe,” said UEFA President Aleksander Čeferin. “I am looking forward to expanding our dialogue further still, thus taking our co-operation to the next level. Together, we can make progress to promote the positive values of football and the European sports model in general,” Mr Čeferin added.

Prior to the ceremony UEFA President Aleksander Čeferin had an exchange of views at the Committee of Ministers’ Deputies meeting.

The two Organisations will enhance their partnership in the interests of the long-term development of sport and its societal role, sharing a number of values and principles such as respect for human rights and dignity, democracy, non-discrimination, cultural diversity, tolerance, sustainability, solidarity, ethics in sport and a commitment to good governance.

Council of Europe Conventions in the field of sport: