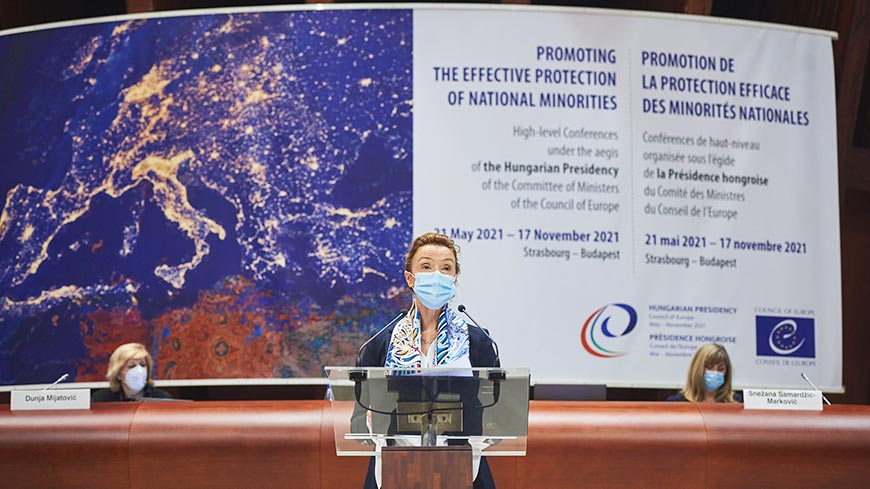 Achievements and future challenges in protecting national minority rights has been the focus of a high-level conference in Strasbourg organised by the Council of Europe under the Hungarian Presidency of the Committee of Ministers. Persons belonging to national minorities face particular difficulties in accessing their human rights, and the challenge has been exacerbated by the COVID-19 pandemic.

In her opening remarks, Council of Europe Secretary General Marija Pejčinović Burić spoke about the reform of the tools of the Council of Europe to help national minorities preserve and develop their cultures and languages and fully participate in public life: the Framework Convention for the Protection of National Minorities and the European Charter for Regional or Minority Languages - the only two legally binding international treaties in this field. The reforms carried out since 2018 to streamline the work of the two mechanisms “are bedding in and bearing fruit”, she affirmed.

The Secretary General also noted that the Council of Europe’s action on national minorities is particularly necessary with new problems arising, such as COVID-19. “Despite the efforts by governments, NGOs and media to support the disadvantaged and fight the hate speech and disinformation, in many cases the help was not there,” the Secretary General said, citing the lack of coronavirus-related information, health advice and services in regional and minority languages. Less than half of member states were providing online education in these languages during the first lockdown in the spring of 2020, preventing equal access to learning. Many Roma and Travellers, particularly hard-hit by the pandemic, were denied access to healthcare and basic sanitation, stigmatised and scapegoated.

“The pandemic has exposed how easy it is for prejudice, disregard and disinformation to rear their ugly heads anew,” Pejčinović Burić concluded, stressing that the Hungarian authorities have chosen a pivotal moment to make this important subject a priority of their Presidency.

Gergely Gulyás, Minister, Head of the Prime Minister’s Office of Hungary, said: “The Hungarian Presidency set the effective protection of national minorities as first priority not only because of the high number of national minority communities in the Council of Europe’s member states. The national minority identities and cultures enrich the societies where they live and these identities have to be further preserved and respected.”

“The protection and support of national minority rights are essential to ensure peace and stability in Europe since high proportion of the European society belongs to a national minority group with different cultural, linguistic, religious identity,” he stressed.