Updated course on Freedom of Expression available on the HELP platform 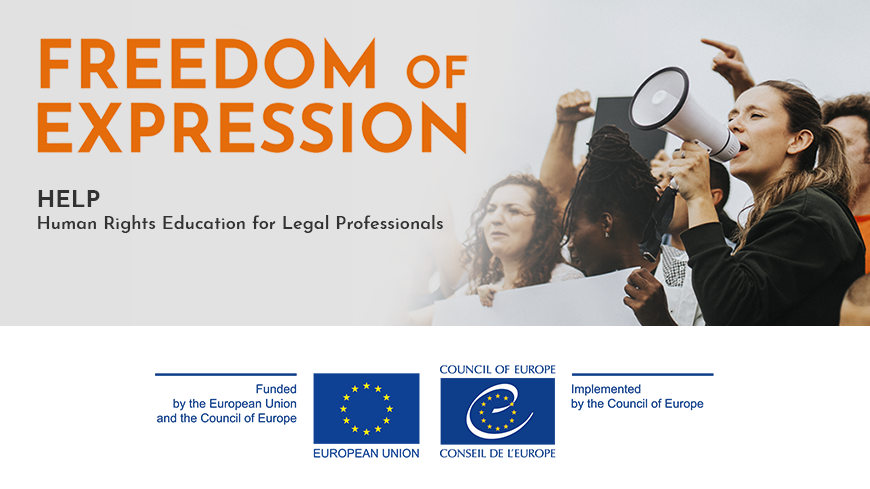 An updated version of the Council of Europe HELP (Human Rights Education for Legal Professionals) course on Freedom of Expression is now available on the HELP online platform.

The course, which was initially developed in 2016, was updated, rebuilt and modernised jointly with the Council of Europe Information Society Department, under the action “Freedom of Expression and Freedom of the Media in South-East Europe (JUFREX)” implemented under the European Union and Council of Europe Joint Programme “Horizontal Facility for the Western Balkans and Turkey II”. A senior lawyer from the Registry of the European Court of Human Rights also contributed to the course update.

Background and aim
In the context of an effective democracy and respect for human rights mentioned in the Preamble to the European Convention on Human Rights (ECHR), freedom of expression is of utmost importance. Without a broad guarantee of the right to freedom of expression protected by independent and impartial courts, there is no democracy.

Within the European human rights protection system, freedom of expression is protected under Article 10 of the ECHR. At the same time, freedom of expression can conflict with other rights protected by the ECHR, such as the right to respect for private life, to conscience and religion etc. The conflict may further arise when authorities need to protect the interests or values listed in Article 10, paragraph 2 of the ECHR, such as national security or public health. When such conflict occurs, the European Court of Human Rights (ECtHR) strikes a balance in order to establish the pre-eminence of one right or interest over the other. The balance of the conflicting interests, one of which is freedom of expression, takes into account the importance of the latter.

The ECtHR has developed an immense body of case-law in applying Article 10 of the ECHR. In deciding cases which concern freedom of expression, domestic courts are required to apply the standards developed by the ECtHR. In order to do that, they must be well acquainted with the relevant case-law of the ECtHR.

This free HELP online course aims exactly at assisting legal professionals, but also other relevant professionals as well as university students, in understanding the European standards concerning freedom of expression and effectively applying Article 10 of the ECHR at the national level.

Course structure
The course is composed of 4 substantive modules. The first one provides an introduction to Article 10 of the ECHR and the key principles governing its application. The remaining modules provide an overview of the ECtHR approach when dealing with relevant topics frequently dealt with under Article 10.

The overall length of the course is approximately 9 hours.

Module 2:
- Types of speech protected under Article 10
- Privacy and defamation

At the end of each module there is a quiz and a summary of the module.

At the end of the course, the user which has succesfully passed it can generate and print out the so-called HELP ‘statement of accomplishment’.