Did you know? The historic city centre of Strasbourg, the Grande Île, has been listed as UNESCO World Heritage – the first time such an honour was given to an entire city centre.

Strasbourg is indeed one of Europe's most beautiful cities – from the imposing Cathedral with its intricate carvings, to the picturesque houses and canals of Petite France – all which make it a very popular tourist destination, not to mention a wonderful place to live. 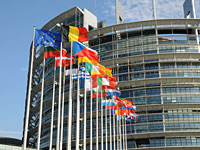 Throughout the year the city offers several fantastic attractions to visit, among which there are such "must-see" tourist sites as: 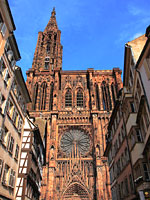 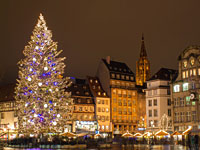 Strasbourg is a very popular tourist destination all year long, but has a significant peak of visitors around Christmas: the Christmas market (Marché de Noël), held here since the XVI century, draws about million visitors each year. It is famous for its unique atmosphere, and delicacies such as Mannele (Alsatian pastry made of sweet leavened dough, in the form of a man) or delicious pain d'epice (ginger bread), best accompanied by a warm mulled wine…

Alsace, on France's eastern border, is the smallest region in metropolitan France and one of the most densely populated at the same time. It is famous for its high number of picturesque villages, churches and castles. There's a lot to see and do in the region, with Strasbourg as your base. Discover the vineyards, lakes and mountains, or visit the region's towns or villages. On both sides of the River Rhine you'll find a great diversity of fascinating landscapes. 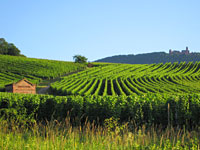 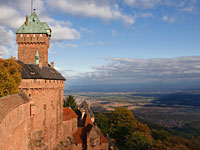 In addition to charming towns and villages, Alsace is also the European region with the greatest number of medieval feudal castles. Due to the turbulent history of the region most of them are now in ruin, however they are still worth a visit. We encourage you to visit Haut-Koenigsbourg Castle (fully restored, and not far from Colmar), Wangenbourg Castle, Petit Arnsbourg (Obersteinbach) Castle, and Fort Mutzig  - the biggest fort built before the First World War.

Alsace is a region well-known for its wine, beer and food. Alsace wines are known by their grape variety, and include Riesling, Pinot blanc, Pinot noir, Pinot Gris, Gewürtzraminer, Sylvaner, and Muscat.

If you order a traditional Alsatian dish, you are likely to be served choucroute (pickled cabbage accompanied with a variety of pork meat). It's also worth trying other local specialities, including baeckeoffe, flammekueche, spaetzle and foie gras. These can be best enjoyed in the "winstubs", local taverns known for their friendly atmosphere.

Whatever you choose, you won't be disappointed. Alsace is the smallest region in France, but it possesses the largest number of Michelin-star chefs per inhabitant!

In Strasbourg you can find several interesting museums, for example:

Strasbourg is also a university town with a vibrant nightlife. You can find plenty of bars and pubs, varying in prices, atmosphere and type of clients.

For more information you can consult this Tourist Office brochure listing many of the restaurants and hotspots in Strasbourg.

Don’t miss any opportunities! Subscribe to our job alerts now.

See more of the Headquarters, based in the beautiful city of Strasbourg, France.

The Council of Europe has a presence throughout all of Europe and its neighbourhood.