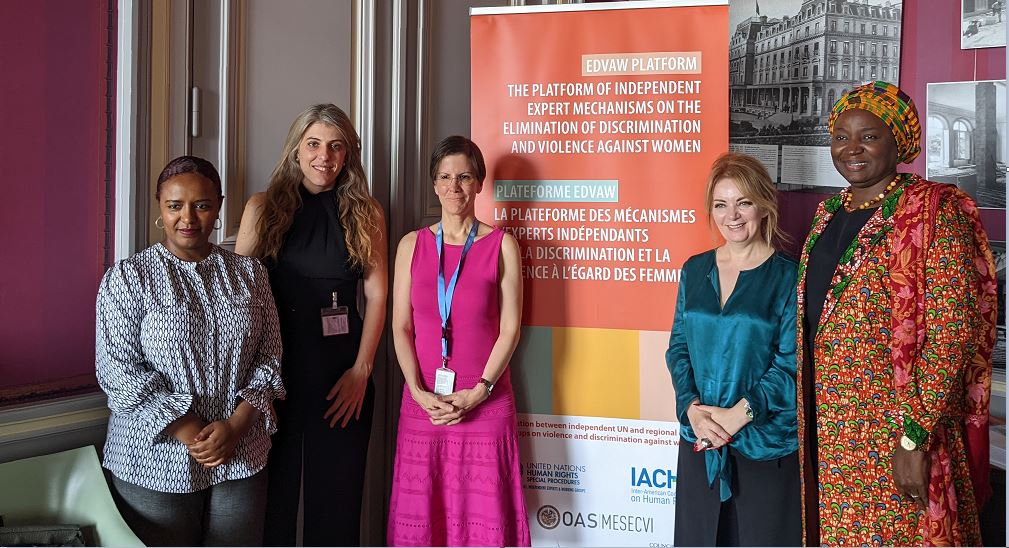 On the occasion of the 50th session of the United Nations Human Rights Council, the Platform of Independent Expert Mechanisms on the Elimination of Discrimination and Violence against Women (EDVAW Platform) held its 13th meeting in Geneva, discussing a range of issues of common concern. Pursuing its discussions on the topical issue of online and technology-facilitated violence against women, it issued a statement proposing further joint action in this regard.

In addition to other thematic discussions, the Platform members engaged with like-minded entities working on women's rights and gender equality issues in a more global context, in particular with a representative of the ASEAN Intergovernmental Commission on Human Rights.

Bilateral discussions were also held with Michelle Bachelet, UN High Commissioner for Human Rights (UNHCHR), and with Gillian Triggs, Assistant High Commissioner for Protection with the United Nations High Commissioner for Refugees (UNHCR), in which the EDVAW Platform presented its recent work and exchanged views on current international and regional standards to eliminate violence against women and discrimination across the world, including in the digital sphere. “Protecting women and girls from violence and discrimination in the digital age means bringing together a wide range of actors and connecting the dots across sectors,” as Iris Luarasi, President of GREVIO currently presiding over the EDVAW Platform stated during its 13th meeting in Geneva. “It is high time to connect the fields of cyberviolence and protection from violence against women and work towards greater recognition of cyberviolence against women as gender-based violence.”

This first in-person meeting of the members of the Platform since 2018, bringing together regional treaty monitoring bodies as well as UN mandates, was made possible thanks to a voluntary contribution by the Government of Japan.