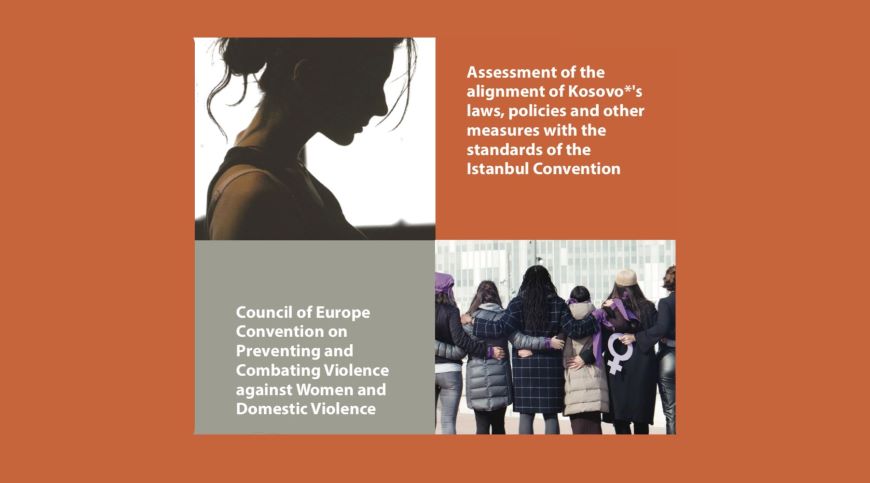 This report available in Albanian, English and Serbian offers a comprehensive overview of progress, promising practices and room for improvement in ensuring the compliance of legal and other measures in Kosovo* with the provisions of the Istanbul Convention. Ultimately, its objective is to provide practical guidance to reinforce the action against violence against women and domestic violence.

Kosovo* was commended for adopting a constitutional amendment, on 25 September 2020, that gave direct effect to the Istanbul Convention. In addition, the report welcomes efforts made by Kosovo* to devise a comprehensive legal and policy framework to tackle violence against women and domestic violence. This includes the National Strategy on the Protection against Domestic Violence and Violence against Women (2022-2026) and, the criminal offences of sexual harassment and female genital mutilation introduced in 2019. Measures have also been taken to appoint specialist law enforcement units, prosecutors or civil judges dealing with domestic violence cases.

Nonetheless, the report points out that further action is warranted to ensure effective access to justice, protection and recovery for women victims. Particularly efforts are needed to improve the level prosecution of violence against women cases, and to ensure that incidents of domestic violence are considered in decisions on child custody or visitation rights. It also notes the need to step up measures aimed to reduce women’s economic dependency on their abusers, as well as to improve the financial stability of shelters and expand the range of specialist support services available to women victims of sexual violence and other forms of gender-based violence.

Although the Government Commission for the Verification and the Recognition of the Status of Victims of Sexual Violence has been a key body for granting reparation to victims of war-time sexual violence since 2018, limitation lies in the eligibility period of this reparation scheme and victims’ lack of awareness of it.

The report also calls for a more systematic collection of disaggregated data on violence against women and mandatory training for all professionals in contract with victims. Measures should also address the needs of women who face intersectional discrimination in accessing protection and support services, including women with disabilities, Roma, Ashkali and Egyptian women, single mothers or LBTI women.

*All reference to Kosovo, whether to the territory, institutions or population, in this text shall be understood in full compliance with United Nations Security Council Resolution 1244 and without prejudice to the status of Kosovo.