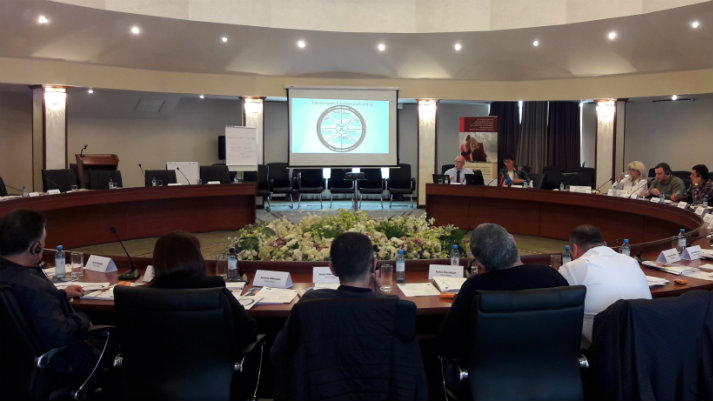 On 23–26 and 29–30 October 2018, the Council of Europe together with the Police of Republic of Armenia conducted trainings on how to prevent violence against women and domestic violence and protect the victims of violence in Tsakhkadzor, Armenia. The trainings targeted at the Heads of Divisions and team leaders of the Police Department on Protection of Juveniles’ Rights and Combating Domestic Violence and trainers of the of the Police Educational Complex of Republic of Armenia. Altogether 66 Heads of Divisions, team leaders and trainers from all regions of Armenia participated in the training activities.. The trainings were conducted based on a practical handbook on violence against women and domestic violence developed by the Council of Europe project “Preventing and combating violence against women and domestic violence in Armenia”.

“Every meeting like this gives us a lot of food for thought on how things could be done better in supporting women victims who are repeatedly experiencing domestic violence and how the law on domestic violence should be applied. The new law also gives more confidence to the law enforcement bodies to act in the interest of the people who have faced violence. This training is another step in learning about and internalising the international experience which will definitely be invested in our daily work,” said Police Major Sos Hovsepyan who participated the trainings.

The Head of Council of Europe office Natalia Voutova and the Head of Police Department on Protection of Juveniles’ Rights and Combating Domestic Violence Nelli Duryan opened the trainings that were conducted by the Council of Europe expert, Anthony Wills, UK senior police officer with 20 years’ experience in the field. Maro Matosian, Executive Director of the Women’s Support Center, running the only existing shelter in Armenia, made presentations on gender stereotypes, domestic violence and the work of NGOs in Armenia.

This Council of Europe project supports Armenia in aligning policies and practises with relevant international and European standards, notably the Council of Europe Convention on Preventing and Combating Violence against Women and Domestic Violence, known as the Istanbul Convention.